Apple Inc. (AAPL) made several important announcements at an event on Sept. 7, 2022, called "Far Out" by the company. These included a new iPhone 14 series, new AirPods Pro, and three new versions of the Apple Watch.

Below are summaries of the key announcements made by Apple at its "Far Out" event on Sept. 7, 2022.

Apple Watch Series 8 adds a temperature sensor, which can connect to ovulation cycle tracking for women. It also has a crash detection feature that can detect if you are in a severe car crash, automatically connect to emergency services, and notify emergency contacts. Additionally, the new version of the smartwatch has international roaming and a low-power mode that effectively doubles battery life to 36 hours. Prices start at $399 for the GPS version and $499 for the cellular version. It comes with three free months of Apple Fitness Plus, can be ordered today, and will be in stores on Sept. 16.

The new Apple Watch SE has workout and activity tracking, heart rate notifications, fall detection, and emergency SOS. It has the same motion sensor for crash detection support. Its display is 30% larger than Apple Watch 3, and it is 20% faster than the original SE. The cost is $249 for GPS and $299 for cellular. It be ordered today and will be in stores on Sept. 16.

Apple Watch Ultra has a battery life of 36 hours that can be extended to 60 hours with a low-power setting that will be available in the fall. It has a more durable titanium case and a big, bright display that is easier to read in sunlight. An action button is customizable for quick control over a range of functions. The digital crown and side button are remodeled for use with gloves, and it has a second speaker for louder sound. The Apple Watch Ultra has a night mode for use in the dark, improved compass and GPS readings, increased water resistance, plus increased ability to function in extreme temperatures, among other features. The cost is $799, and it can be ordered today, with availability in stores on Sept. 23.

AirPods Pro (2nd generation) have a new H2 chip and a new low-distortion audio driver. The camera on the user's iPhone can be used to create personalized spatial audio calibrated to the size of the user's head. They offer double the amount of noise cancellation over the original AirPods Pro. Different ear tip sizes are designed to allow more people to wear the AirPods Pro 2 comfortably. They also are designed to reduce sound of harsh and high-decibel environmental noises. Volume can be adjusted with a swipe, and listening time is expanded by 33% to six hours. With a charging case, listening time can extend to 30 hours. The new generation of AirPods Pro cost $249, pre-orders start on Sept. 9, and they will be in stores on Sept. 23.

iPhone 14 Pro and iPhone 14 Pro Max come in display sizes of 6.1 inches and 6.7 inches, respectively. Their peak outdoor brightness is 2,000 nits, and they have an always-on display feature. They also can dim the display, including wallpaper photos, to keep it visible without draining the battery. The A16 Bionic chip in these models is touted by Apple as the fastest chip on the market. The CPU is faster while using 20% less power than the A15, while the GPU has 50% more memory bandwidth. The cameras are supposed to deliver significant improvements in low-light settings. The iPhone 14 Pro prices are unchanged from those for the iPhone 13, at $999 for the Pro and $1,099 for the Pro Max. Preorders begin Sept. 9, and the phones hit stores on Sept. 16. 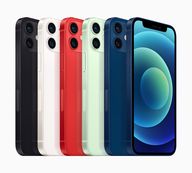 Apple (AAPL) Taking Orders for iPhone 12, HomePod Mini
Partner Links
Related Terms
Mutual Funds: Different Types and How They Are Priced
A mutual fund is an investment vehicle consisting of a portfolio of stocks, bonds, or other securities, overseen by a professional money manager.
more
Who Is Bernard Arnault and What Companies Does LVMH Own?
Arnault, the wealthiest person in France and one of the wealthiest in the world, is Chair and CEO of LVMH, the world's largest luxury conglomerate.
more
Brexit Meaning and Impact: The Truth About the UK Leaving the EU
Brexit refers to the U.K.'s withdrawal from the European Union after voting to do so in a June 2016 referendum.
more
Facebook (FB) Papers
The Facebook (FB) Papers are a vast trove of internal documents made public by whistleblower Frances Haugen, casting the company in negative light.
more
Guide to Company Earnings
A quarterly earnings report is a filing made by public companies every three months to report on their most recent financial performance.
more
Profit Warning
Profit warning occurs when a company advises shareholders and the public that its earnings results will not meet analyst expectations. A company generally issues a profit warning prior to the public announcement of its official earnings results.
more