The Air France KLM World Elite Mastercard from Bank of America is the airline's only co-branded credit card available in North America. It has an $89 annual fee and offers 3 miles per dollar spent on purchases with Air France, KLM Royal Dutch Airlines, Delta, Alitalia, and 15 other SkyTeam alliance airlines. There are also multiple easily earned bonus opportunities, including a one-time offer plus annual ones, some automatic and some based on spending. 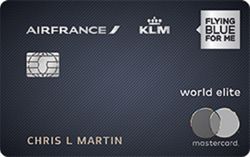 The Air France KLM World Elite Mastercard is an unusually good choice for customers not only of Air France or KLM Royal Dutch Airlines but of many other carriers. In part, that’s because air purchases made with this card earn a generous 3 miles per dollar spent at any of the 19 carriers of the SkyTeam alliance, including Delta and Alitalia. And the miles you earn with the card, and from flights, can be earned and redeemed with an even-larger number of Air France/KLM Fly-Blue partners, also including Delta and Alitalia.

Those who travel (or use the card) only occasionally will also find the Air France KLM World Elite Mastercard an economic choice, since justifying the cost of the annual fee is unusually easy. The value of the card’s 5,000-mile bonus alone, awarded for just $50 in annual spending, all but equals the cost of the $89 annual fee. The rewards from spending just $185 a year on the card would equal the remaining $9 of the cost.

You receive 50,000 bonus miles after spending $2,000 or more within the first 90 days after you open the card’s account. We value this bonus offer at $770 when redeemed for flight purchases through Air France, KLM Royal Dutch Airlines, and SkyTeam and Flying Blue member airlines.

Upon card approval, you'll also receive 60 XPs, those being the rewards that allow you to gain status in the Flying Blue program.

You earn 3 miles per dollar spent on flights booked directly with Air France, KLM Royal Dutch Airlines and on purchases made directly with any airline members of SkyTeam. You earn 1.5 miles per dollar spent on all other purchases.In addition to its initial bonus offer, this card offers some ongoing annual bonus opportunities. As long as your account is active, you'll get 5,000 miles each year after making $50 in purchases, a benefit that alone is worth $75. You also get 20 XPs each year on your account anniversary, and the opportunity to earn an additional 40 XPs by charging $15,000 in purchases on the card within a year.

All bonus miles and XPs will be posted to the cardholder's account within four to six weeks after they're earned.

Miles can be redeemed towards flights with Air France, KLM Royal Dutch Airlines, or any of the 35 or so airline partners of those two carriers in the Flying Blue program, which include Delta Airlines and Virgin Atlantic.

You can also spend Flying Blue miles directly with a number of hotel, car rental, and retail merchants who are partners in the program. You can also spend them with Bitebird, which provides WiFi hotspots around the world, and for museums and other experiences in France and the Netherlands.

All that said, keep in mind that you’ll generally get the best value by redeeming miles for flights. We value each Flying Blue mile at an average of 1.54 cents when used to book air travel.

You can transfer miles to a family member or friend, but there's no direct way to transfer miles to another loyalty program with this card. You can, however, transfer miles or points from some of those programs to Flying Blue, and so allow them to be used for purchases from Air France, KLM, and their Flying Blue partners. Among those options are to transfer American Express Membership Rewards, Chase Ultimate Rewards, and Citi ThankYou Rewards to the Flying Blue program, and so convert them to miles. There are also some hotel partners that allow such conversions. The transfers have varying rates, however, with some of them dismally low, and there may be restrictions. For example, you can transfer Hilton Honors points only when you have at least 20,000 in your account, and the rate is 10,000 Hilton Honors points (worth an estimated $45, by our valuation) for 1,000 Flying Blue points, which we estimate are worth only $16.

In order to make the most of this card, first spend the $2,000 necessary within the first 90 days of opening an account in order to earn the 50,000-mile bonus, which we estimate is worth $800 when used for flights on Air France, KLM, and their airline partners.

Next, use your card to earn 3 miles per dollar spent on direct flight purchases with Air France, KLM, and their fellow members of the SkyTeam airline alliance. You can, of course, also use this card for other purchases, too. At 1.5 miles per dollar, this spending earns you a passable 2.4 cents per dollar when used for flights.

Finally, spend enough on this card annually to earn the anniversary mile and XP bonus. Earning the 5,000-mile bonus requires only $50 per year in spending, but spending must be pushed to $15,000 or more for the year to earn the additional 40 XPs.

Let’s assume that you only use this card for flight and hotel purchases for intermittent travel. We’ll say you take two return trips per year to Paris from the U.S. on Air France and spend $560 per round-trip flight, the average according to Cheapflights.com. Further, let’s say you spend two nights in a hotel on each trip, at $150 per night.

Overall, you'd earn 4,410 miles on this card. At a value of 1.54 cents each when used for flights, those miles have an estimated value of $68. (However, keep in mind that these purchases would also qualify you for the 5,000 miles bonus, worth $75, when you spend at least $50 a year on the card. And our mileage total does not include the miles you would earn from the actual travel itself.)

Frequent travelers will naturally earn bigger benefits with this card, as will those who use the card regularly for other spending. Let’s assume, then, that you double the travel schedule above, using the card to purchase four round-trip flights per year and staying in a hotel for two nights per trip. As in the scenario above, we’ll estimate that each round-trip flight costs an average of $560, while each hotel stay costs an average of $150 per night. Doubling the earnings detailed above, that purchasing would earn you 4,820 miles, worth an estimated $140. Let's further assume that you also charge to the card $16,000 per year for various daily living expenses—such as food, gas, clothing, entertainment, and personal care. Those miscellaneous purchases, which earn 1.5 miles per dollar spent, would yield a further 24,000 miles which, at 1.54 cents apiece, would be worth $360 when used for flights.

Overall, you'd earn 28,820 miles on this card worth $444. (However, once again keep in mind that these purchases would also qualify you for the 5,000 miles bonus, worth $75, when you spend at least $50 a year on the card. And our mileage total does not include the miles you would earn from the actual travel itself.)

Bank of America, which issues the Virgin Atlantic World Elite Mastercard received a score of 798 out 1,000 in J.D. Power’s 2019 U.S. Credit Card Satisfaction Study. The bank ranked in seventh place among 12 major credit card issuers. The score was a little below the national average of 806 points for all issuers.

Bank of America offers mobile apps for iOS and Android. These apps allow for account access in general, including the ability to keep track of credit card transactions. Scored out of a possible 5 by users, Bank of America’s mobile app has a score of 4.8 stars in the Apple App Store and 4.7 stars on Google Play.

Bank of America offers a host of standard security features on its cards, including fraud monitoring, account alerts, and zero liability for fraudulent purchases.

The Air France KLM World Elite Mastercard offers unusual versatility in the travel providers—especially the airlines—from whom you can earn and spend the miles you earn in using the card. In addition, the card’s ongoing annual mileage reward for very minimal spending brings instant value in exchange for the card’s annual fee, which may make this a good option, even for those that typically prefer an annual-fee-free card. What the card isn’t is a well-rounded travel card that offers benefits to help make flying more comfortable and convenient. For that reason, you’ll probably want to pair the Air France KLM World Elite Mastercard with at least one other general travel card that fills in the features it lacks. Among those choices are the American Express Blue Cash Everyday which would, for no annual fee, allow you to add rental-car insurance and a 24/7 global-assistance travel hotline. Paying $150 a year for the American Express Green card adds such additional travel features as a $100 LoungeBuddy credit.

Apply Now
For Air France KLM World Elite Mastercard®
on Bank of America's Secured Site.
Compare This Card
See how this card compares to similar cards
CURRENT CARD
Air France KLM World Elite Mastercard®
overall rating
3.8
Apply Now
Recommended Credit Score Our recommended ranges are based off of the FICO® Score 8 credit-scoring model. Credit score is one of the many factors lenders review in considering your application.
350 579
580 669
670 739
740 799
800 850
Good - Excellent
Investopedia Credit Card Rating Methodology
Investopedia is committed to delivering the best credit card recommendations in the industry. We’ll tell you when a card is good, we’ll tell you when a card is bad, and we’ll only call a card the best if we would recommend it to our friends or family members.
Overall Star Rating Explained
To rate credit cards we objectively assess, score and weight nearly 100 individual card features which roll up into five major feature sets: fees, interest, rewards, benefits and security/customer service. Here’s how we weighted those feature sets for the overall star rating of a card:
We have applied our proprietary rating methodology to every generally-accepted credit card in the U.S. domestic market to allow consumers to make fully informed choices. It’s important to note that for our overall score that we make a number of assumptions about how you would be using your credit card: