The Amazon Rewards Visa Signature offers rewards on online purchases at the shopping site and at Whole Foods Market, which Amazon owns. There are also tiered bonus rewards at restaurants, gas stations, and drug stores. There’s no annual fee and you receive a $50 Amazon Gift Card upon approval. 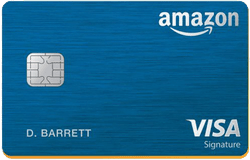 Get a $60 Amazon.com Gift Card instantly upon credit card approval.

Naturally, the Amazon Rewards Visa Signature best suits regular customers of Amazon.com or Whole Foods Market who also have an Amazon Prime membership. The additional 2% you’ll earn as a Prime member probably won’t alone justify the $119 annual membership. But it’s a nice bonus to add to other Prime features, from free fast shipping to video streaming.

This card may also have appeal if no other card in your wallet offers 2% rewards on dining, gas, and purchases from drug stores. That’s quite likely the case, unless you own either premium credit cards for which you pay a fee or no-fee cards that are dedicated to those purchases.

Also, assuming you lack a premium credit card—and specifically one focused on travel—the Amazon Rewards Visa Signature offers three key benefits that are relatively rare in a no-fee card. The card provides secondary insurance coverage on rental cars and free roadside assistance if you become stranded in your own vehicle. It also lacks foreign-transactions fees, which is a boon when traveling abroad.

Upon being approved for the Amazon Rewards Visa Signature, you receive a $50 Amazon Gift Card. No purchase must be made or spending threshold reached.

Rewards are accumulated in points, at the multiplier rate for the purchase in question. Spending $1 at Amazon.com or Whole Foods, then, would earn three points, with an additional 2 points awarded to Prime members. You’d receive 2 points per dollar spent on gas, dining, or drug stores and a single point per dollar on all other purchases

Rewards from the Amazon Rewards Visa Signature card are relatively easy to redeem. It’s possible to use the rewards to pay for purchases at Amazon.com. Every 100 points you accumulate in your account can be redeemed for $1 off the purchase price at checkout. You can choose to pay for all or part of a purchase at Amazon.com with points.

Redeeming points for travel requires that you actually call the Chase Travel Center. Because the rewards earned from the Amazon Rewards Visa Signature aren’t connected to Chase Ultimate Rewards, you can’t use that portal to redeem rewards for travel and other items.

Points earned with the Amazon Rewards Visa Signature can’t be transferred to other programs.

The best way to make the most of the Amazon Rewards Visa Signature is of course to use it for all purchases at Amazon.com and Whole Foods Market, which earn 3% in rewards for regular Amazon customers—a higher rate than for any other types of purchases. But it can also be used for other purchases, of course, including those on gas and food—both as groceries and as restaurant meals, both of which earn 2% in rewards.Here are several scenarios on what spending could earn in rewards with this card.

Amazon.com shoppers who do not have a Prime membership spend, on average, about $600 per year at the site, according to an analysis by Statista﻿﻿. At 3% back, that’s 1,800 points, which are worth $18 in rewards. Then consider a non-Prime member who also shops at Whole Foods for, say, half of their groceries. Since the average household spent $4,464 on food for home in 2018, according to the Bureau of Labor Statistics, that Whole Foods spending would total about $2,230 and earn $66 in rewards, given the same 3% rewards rate. Grand rewards total: about $85.

And if the household also has an Amazon Prime membership? They would enjoy an additional 2% in rewards on all of the purchases above. That boost would add $12 in rewards for the Amazon spending and $44 in rewards for the Whole Foods spending. Add this extra $55 or so in Prime rewards to the $85 earned from basic rewards and the grand total for the year reaches about $140.

Let’s now consider a family that spends more than average at Amazon and Whole Foods and also uses the card more widely. Take, for example, a non-Prime household that spends double the average at Amazon—$100 a month, for a $1,200 annual total—and spends twice what our regular family does at Whole Foods—for a total in groceries of $4,600 a year. That spending would yield $170 a year in rewards.Then add use of the card for the average amount of restaurant spending, which was $3,459 for all “food away from home” in 2018. At the rewards rate of 2%, those dining expenditures would earn about $69. Adding the average spending of $2,109 on gas to the mix, at the same 2% rate, adds an extra $42 or so to the total rewards. The grand total in rewards would be $170 plus $42: $212. And if our family were a Prime household? They’d earn an extra 2% in rewards on the Amazon/Whole Foods total spending of $5,800, which would contribute an additional $116 in rewards. Grand total: $328. That’s a large sum indeed, especially for a card with no annual fee.

Chase, which issues the Amazon Rewards Signature, received a rating of 809 out of a possible 1,000 in the J.D. Power 2020 U.S. Credit Card Satisfaction Study. ﻿﻿That score ranks Chase just below the average of 810 among national issuers. Users on Amazon.com rate the Amazon Rewards Visa Signature as a 3.9 out 5 stars.

It’s possible to manage your Amazon Rewards Visa Signature using the Chase mobile app, which is available for iPhone and Android phones. The app receives user scores of 4.8 out of 5 stars in the Apple Store and 4.4 out of 5 stars on Google Play.

The Amazon Rewards Visa Signature has standard security features for the industry.

The Amazon Rewards Visa Signature rewards ardent customers of Amazon.com, Whole Foods Market, or both with decent rewards that are also easy to redeem on the shopping site. But the card ascends from worthwhile to near essential to those who both spend heavily at both retailers and have an Amazon Prime membership. The extra 2% in rewards on Amazon and Whole Foods purchases only adds to the other benefits of Prime, including member sales offers on both sites.

However, for those who shop only occasionally at Amazon or Whole Foods, a general rewards card with a flat cash back rate, or tiered earnings on different types of shopping, might be a better choice. Examples include Amex Blue Cash Everyday and Capital One SavorOne.

Apply Now
For Amazon Rewards Visa Signature Card
on Chase's Secured Site.
Compare This Card
See how this card compares to similar cards
CURRENT CARD
Amazon Rewards Visa Signature Card
overall rating
3.4
Apply Now
Recommended Credit
Score Our recommended ranges are based off of the FICO® Score 8 credit-scoring model. Credit score is one of the many factors lenders review in considering your application.
350 579
580 669
670 739
740 799
800 850
Good - Excellent
Investopedia Credit Card Rating Methodology
Investopedia is committed to delivering the best credit card recommendations in the industry. We’ll tell you when a card is good, we’ll tell you when a card is bad, and we’ll only call a card the best if we would recommend it to our friends or family members.
Overall Star Rating Explained
To rate credit cards we objectively assess, score and weight nearly 100 individual card features which roll up into five major feature sets: fees, interest, rewards, benefits and security/customer service. Here’s how we weighted those feature sets for the overall star rating of a card:
We have applied our proprietary rating methodology to every generally-accepted credit card in the U.S. domestic market to allow consumers to make fully informed choices. It’s important to note that for our overall score that we make a number of assumptions about how you would be using your credit card: