The American Express Gold Card offers an unprecedented 4 points per dollar at restaurants worldwide and on up to $25,000 spent each calendar year at U.S. supermarkets, making it among the best dining and groceries rewards cards. It also offers an outstanding 3 points per dollar on flights booked directly with airlines or through amextravel.com. To help make up for a $250 annual fee, cardholders will also receive up to $120 each year in dining credits at select chains and a $100 annual airline fee credit on an eligible airline. 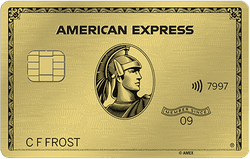 Earn 60,000 Membership Rewards(R) points after you spend $4,000 on eligible purchases with your new Card within the first 6 months.

The American Express Gold Card is best suited to people who eat out and fly enough to justify the card's $250 annual fee through its generous dining and airline rewards and credits. With rich rewards on supermarket spending, the card is also a fine choice for those who spend heavily on groceries. However, it's also a card for those willing to master the use of points in rewards programs, as opposed to the simpler solution of receiving money in your account by using a cash back card.

On average, American households spent $7,729 on groceries and eating out in 2017, according to the Bureau of Labor Statistics. With that spending alone, you’d earn 30,916 points per year with this card. That annual spending could be worth a few hundred dollars, and possibly more depending on how you use or transfer those points.

The 3 points per dollar spent directly with airlines and through amextravel.com would also deliver decent savings for frequent flyers. Let's say you flew five times a year, and each time paid the average domestic fare, which is $367 according to industry group Airlines for America. You'd earn more than 5,000 points with the card, which could translate to $108 or so a year towards flights when converted to airline points.

As a new cardholder, you'll earn 60,000 bonus points after you spend $4,000 in the first six months. If you redeem your points for travel directly with Amex, the one-time offer could be worth up to almost $700, which isn't a bad return on spend for $4,000 worth of expenses in six months.

Even converted through a less lucrative option, the one-time offer points might still justify the card's annual fee in full for the first year. That allows you some time to test-drive the card and determine whether it’s the right fit for you before its renewal fee looms.

The card offers 4 points per dollar at restaurants worldwide and on the first $25,000 spent each calendar year at U.S. supermarkets. You'll also earn 3 points per dollar on flights booked directly with airlines and through amextravel.com. On all other purchases, you’ll receive 1 point per dollar.

It's important to note that while you’ll net points by eating at restaurants worldwide that accept Amex, only purchases at U.S. supermarkets are rewarded. Also, flights booked with third-party services such as Kayak and Trivago are not eligible for bonus rewards.

You can redeem your points in many different ways, with varying redemption values. The options, with values per 10,000 points redeemed, include statement credits toward card charges ($60), paying with points at checkout ($50 to $70 in most cases), or buying gift cards from Amex ($50) or a host of airlines, restaurant chains, or retailers (from $70 to $100, depending on the company.)

If you redeem your rewards by transferring them to one of Amex's partners, however, you may be able to get more for your points than these amounts.

You can transfer Amex Membership Rewards points to a host of airline plans and several hotel loyalty programs. Airline and hotel programs typically have dynamic pricing structures, which allow you to maximize the value of your points based on how you redeem them.

The most generous of Amex's partners offer 1.6 to 2.0 points per Amex point redeemed, while most trade "at par"—that is, an airline or hotel point for every Amex one. Here's a list of Amex’s partners and the transfer ratios:

Using your card everywhere you buy is the first step. Be especially attentive to using only this card in the categories for which it offers the richest rewards, such as dining and groceries. Try to concentrate your food shopping at supermarkets over alternative retailers that sell food; purchases at superstores and warehouse clubs do not earn rewards, nor does food bought from convenience stores. Try, too, to buy non-food items you need at the supermarket, since all purchases made at supermarkets qualify for the 4-points-per-dollar rewards.

When it comes to using your hard-earned points, consider skipping the generally pricey redemption options offered by Amex in favor of transferring your points to partners. Making the most of partner programs means not only joining them, naturally, but familiarizing yourself with their conditions and staying abreast of any changes to them, including time-limited specials or bonus opportunities.

If you have a flight or hotel stay coming up, check for itineraries with Amex's partners and compare what it would cost you in points or miles to the cash price. Make a rough calculation of the comparative benefits. If you can get more than a cent per point or mile out of the redemption, it's more than you'd get from the point rewards you’d earn by booking directly through Amex.

The card offers up to $120 in dining credits each year—that's $10 per month in automatic statement credits when you use your card at Grubhub, Seamless, The Cheesecake Factory, Ruth's Chris Steak House, Boxed, and participating Shake Shack locations. Before you start swiping, though, enroll in the program. Otherwise, you’ll be paying the full bill out of pocket. Be aware, also, that you need to use the credit every month, since it won’t roll over to the next one if it isn't used.

The card also comes with a $100 annual airline fee credit. The caveat is that you'll need to choose a single qualifying airline once per year, and the credit only counts toward things like checked baggage fees and in-flight meals—not for tickets or seat upgrades.

Lastly, the card provides payment flexibility with its Pay Over Time and Plan It features. Pay Over Time allows charges over $100 to be paid over time just like a credit card at a set interest rate determined by the credit quality of the applicant. The Plan It feature allows the flexibility to split up large purchases into smaller payments over a period of months in exchange for a set fee.

American Express ranks second in J.D. Power's 2019 Credit Card Customer Satisfaction study, ranking among the best across all categories. Amex offers free access to your FICO credit score, which most other major card issuers offer and can be helpful if you’re working to build or maintain a credit history.

If you have questions, you can reach a customer service representative by phone 24/7, which is also standard among major card issuers. There's also a live chat option when you’re logged into your account, which isn’t a standard feature.

Remember, though, that you may run into acceptance issues that you might not have with a Visa or Mastercard credit card.

American Express offers security features that are mostly standard for the credit card industry. One exception is the ability to freeze and unfreeze a particular card in the Amex mobile app, which is a useful feature if the card is lost or stolen.

The American Express Gold card is an excellent choice for people who spend a lot on groceries and dining out. It also doubles as a fine travel card, with generous rewards for booking flights and a $100 fee credit to offset baggage charges and in-flight purchases (limited to a single airline).

Given its hefty annual fee, though, the card may not pay off, at least after the first year, if you don't buy a lot of groceries at supermarkets. The same may apply if you don't dine out a lot, and so won’t benefit much from its exceptional restaurant rewards or $10 monthly credit at select dining chains.

It's also not ideal for those who prefer to be rewarded in a simple way, in cash. If you’re uninterested in becoming a scholar of rewards programs, a generous cash back card might be a better choice. One such Amex option is the American Express Blue Cash Preferred card, which has generous supermarket and gas cash back rewards and a far lower ($95) annual fee than the American Express Gold Card.

Apply Now
For American Express® Gold Card
on American Express' Secured Site.
Compare This Card
See how this card compares to similar cards
CURRENT CARD
American Express® Gold Card
overall rating
3.6
Apply Now
Recommended Credit Score Our recommended ranges are based off of the FICO® Score 8 credit-scoring model. Credit score is one of the many factors lenders review in considering your application.
350 579
580 669
670 739
740 799
800 850
Good - Excellent
Investopedia Credit Card Rating Methodology
Investopedia is committed to delivering the best credit card recommendations in the industry. We’ll tell you when a card is good, we’ll tell you when a card is bad, and we’ll only call a card the best if we would recommend it to our friends or family members.
Overall Star Rating Explained
To rate credit cards we objectively assess, score and weight nearly 100 individual card features which roll up into five major feature sets: fees, interest, rewards, benefits and security/customer service. Here’s how we weighted those feature sets for the overall star rating of a card:
We have applied our proprietary rating methodology to every generally-accepted credit card in the U.S. domestic market to allow consumers to make fully informed choices. It’s important to note that for our overall score that we make a number of assumptions about how you would be using your credit card: