The American Express Blue Cash Preferred card offers exceptional 6% cash-back rewards for spending at supermarkets and on streaming services, and a generous 3% rate for gas and transit purchases—although superstores and warehouse clubs are excluded. It has a $95 annual fee, but you could justify that over the year if you spent $31 per week on groceries alone. 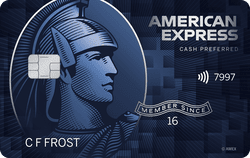 Earn a $250 statement credit after you spend $1,000 in purchases on your new Card within the first 3 months.

The American Express Blue Cash Preferred card is best suited to those who buy their groceries at traditional supermarkets or subscribe heavily to streaming services, or both. Purchases in these categories come with an unequaled 6% rewards rate. If you maxed out your spending at supermarkets at the capped limit of $6,000, for example, you'd earn $360 in cash back—more than three times the $95 annual fee. Spending $50 per month on streaming services like Netflix, Hulu, Spotify, HBO Now, and ESPN+ could net you another $36 in cash back per year.

The card is also a fine choice for commuters, since it earns a 3% cash back on gas and transit purchases. If you charge to this card the average amount spent by a household on gas, which is $1,977 per year according to the U.S. Energy Information Administration, you’d earn $59 in cash back.﻿﻿ If you’re a transit commuter, you could earn about $25 a year in cash back if you spent an average of $70 per month on transit passes.

New cardholders can earn a $250 statement credit after making $1,000 or more in purchases on their card within the first three months of membership. The reward comes in the form of a statement credit that posts eight to 12 weeks after you meet the minimum $1,000 spending threshold. Sometimes you can be offered different terms for your bonus such as $300 instead of $250 or six months instead of three.

That’s a relatively small spend for a relatively hefty reward. Indeed, the one-time offer represents over a 10% return on the card’s initial spend alone, on a net basis for the year. (Our calculation subtracts the card’s $95 annual fee from the net reward. It does not, however, count the extra $10 to $60 you’d earn in cash back from the required spend within three months, or the continuing cash back you might make by using the card for the remainder of the year.)

By comparison, the one-time offers for other cards come with spending requirements as high as $3,000, but often for cash rewards of at most $150 or $200. With other cards, the one-time offer comes in the form of points, which is a less direct form of reward than the statement credit you earn with the American Express Blue Cash Preferred Card, which essentially represents cash in your pocket.

All streaming service purchases must be on American Express' approved list in order to qualify for cash-back rewards. The list is expansive, encompassing most or all of the major audio (Spotify, Audible, Apple Music) and online video (Netflix, Hulu, HBO Now) streaming services. Online cable alternatives (Sling TV, YouTube TV, DirectTV now) are also included, as SiriusXM service, either online or via satellite. Not included, notably, is service billed through major cable or satellite TV services.

Cash back rewards are received in the form of rewards dollars that can be redeemed as a statement credit once they total $25 or more.

The best way to get the most out of this card is to max out the 6% cash back on supermarket purchases, up to the $6,000 cap for receiving that rewards amount. Then charge all your streaming services to the card, to earn the same hefty 6% rate, as well as purchasing as much as possible of your gas and other transit expenses with the card, to earn a still-generous 3% in cash back. All other purchases earn 1%, which can still add up.

Let's say your family spends $7,061 on groceries per year, $348 on streaming services, $254 on transit and $1,977 on gas. You’d already earn $458 in cash-back rewards from this card, without considering other miscellaneous purchases that would earn 1% in cash back.

Families can really maximize this card by opting to buy more items at the supermarket, shifting their TV-service spending from ineligible cable and satellite services to eligible streaming services, and charging all local transit and gas purchases to the card.

For example, if you can’t reach the $6,000 cap for supermarket spending (to earn $360 in cash back) through food alone, supplement your spending there by purchasing pharmacy products, pet supplies, household cleaners, and other items that you might otherwise buy elsewhere. Cutting the cord on cable or satellite and increasing your spending on streaming services could also help. In addition to on-demand providers such as Netflix, services like DirecTV Now are often cheaper than cable or satellite while still allowing for live TV streaming. You could save a further $36 a year by charging a $50-per-month cable alternative streaming service to the card.

And since this card doesn't charge for additional cards for others, adding the entire family to maximize spending on ride sharing and gas would be beneficial as well. A family that together spends $3,000 on gas annually, for example would earn $90 in cash back.

Overall, that's $486 in cash-back rewards per year, again without counting in additional rewards from charging miscellaneous purchases to the card to earn 1% cash back.

Customers can utilize the company's help center on its website or its mobile app for inquiries about their card; they'll find frequently asked questions and how-to videos.

This card also has pre-purchase verification to confirm that your use of the card on certain purchases is authentic, as well as benefiting from Amex alerts for irregular account activity.

If you lose your card, American Express will replace it for free. It will be delivered within a few days, and sometimes the next day.

Virtual credit card numbers can be made through the American Express Go portal, and international travelers can set up a PIN for additional security while on the go.

This card doesn't come with a lot of fees, relatively speaking, and those it does carry are in line with industry standards. But for international travelers, that 2.7% fee for foreign transactions is in contrast to the absence of such a fee with some cards, including many aimed at travelers.

The high rewards rate in this card's main categories—groceries, streaming services, transit, and gas—makes it a stand-out card for day-to-day spending, as opposed to cards whose most generous rewards are in travel or entertainment categories.

It's also a good fit for consumers who want a dual cash-back reward and. The 12-month 0% introductory APR provides the opportunity to finance a major purchase over a year's time while still earning rewards.

Pairing this card with a high flat-rate cash-back reward card could make it an even better choice. The Citi Double Cash card, for instance, pays an unlimited 1% cash back when you buy, and then an additional 1% when you pay for those purchases. That's essentially 2% cash back on all purchases, making this card a good option when paying for everything else. There is also no annual fee or cap on rewards purchases with Double Cash.

Though the American Express Blue Cash Preferred card is a good option for those seeking cash-back rewards, it's probably not the best choice for frequent travel, especially if it’s outside the U.S. There's a 2.7% foreign transaction fee, and it lacks the higher cash-back rates for travel purchases and other travel perks of cards that focus more on travelers.

Apply Now
For Blue Cash Preferred® Card from American Express
on American Express' Secured Site.
Compare This Card
See how this card compares to similar cards
CURRENT CARD
Blue Cash Preferred® Card from American Express
overall rating
4.1
Apply Now
Recommended Credit Score Our recommended ranges are based off of the FICO® Score 8 credit-scoring model. Credit score is one of the many factors lenders review in considering your application.
350 579
580 669
670 739
740 799
800 850
Good - Excellent
Investopedia Credit Card Rating Methodology
Investopedia is committed to delivering the best credit card recommendations in the industry. We’ll tell you when a card is good, we’ll tell you when a card is bad, and we’ll only call a card the best if we would recommend it to our friends or family members.
Overall Star Rating Explained
To rate credit cards we objectively assess, score and weight nearly 100 individual card features which roll up into five major feature sets: fees, interest, rewards, benefits and security/customer service. Here’s how we weighted those feature sets for the overall star rating of a card:
We have applied our proprietary rating methodology to every generally-accepted credit card in the U.S. domestic market to allow consumers to make fully informed choices. It’s important to note that for our overall score that we make a number of assumptions about how you would be using your credit card: