Intraday trading ranges naturally expand and contract over time while market players battle for directional control or when a trending security attracts a stream of buyers or sellers. From time to time, a single day's price bar closing near the intraday high or low carries a wealth of information that observant traders can use to make profitable buy and sell decisions.

These wide range bars, which print greater-than-average ranges at key market intersections, may confirm major price developments, such as a successful or failed test at a moving average. At other times, they can signal a sharp increase in momentum, with one side giving in and allowing a trending security to surge higher or lower quickly because the friction of opposing positions has been removed from the system.

Moreover, legitimate breakouts and breakdowns should elicit at least one major wide range bar because the security is pushing beyond an easily observed boundary, like a trendline or horizontal resistance level. In turn, this should encourage a large number of market participants to come off the sidelines in an emotional act that yields greater-than-average volume.

Conversely, the failure to print a high-volume wide range bar during a breakout or breakdown generates a notable divergence that tells us to watch for a reversal that traps the trend-following crowd. While it isn't necessary for the bar to print on the day of the breakout or breakdown, it should appear within the broader set of price bars that form the rally or sell-off wave.

Price movement into the 50- or 200-day exponential moving average (EMA) creates special conditions for wide range bar signals that traders can use for timely entry or exit, depending on the outcome. But patience is required because the testing process can unfold over many weeks, during which price bars congest while bulls and bears fight for domination. This conflict can draw multiple signals, with bars expanding away from the moving average on higher-than-normal volume and then reversing gears into another test.

Each expansion bar adds to an underlying theme that eventually yields either a sustained reversal that continues the trend in place prior to the test or a sustained continuation move that breaks the moving average. The complexity of this testing process and its multiple incarnations can fool less-prepared traders who jump on each wide range bar and then get whipsawed in the opposite direction.

You can improve timing with expansion bar signals by looking for a volume surge that shows high emotional levels. In addition, a 5,3,3 Stochastic indicator improves results after extended tests, with the observant trader watching for the final thrust to coincide with a bullish crossover for a rally and bearish crossover for a decline, preferably aligning with overbought and oversold levels.

It’s easy to see how expansion bar signals could have benefited your bottom line when real estate giant CBRE Group ground through three tests at the 50-day EMA in a four-month period: 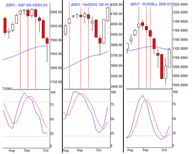 Early Warning Signs That Function as Exit Indicators for a Trade

Trend Trading: The 4 Most Common Indicators

Strategies & Applications Behind The 50-Day EMA (INTC, AAPL)
Partner Links
Related Terms
Pullback: What It Means in Trading, With Examples
A pullback refers to the falling back of a price of a stock or commodity from its recent pricing peak.
more
MACD Indicator Explained, with Formula, Examples, and Limitations
Moving average convergence/divergence (MACD) is a momentum indicator that shows the relationship between two moving averages of a security’s price.
more
Relative Strength Index (RSI) Indicator Explained With Formula
The Relative Strength Index (RSI) is a momentum indicator that measures the magnitude of recent price changes to analyze overbought or oversold conditions.
more
Golden Cross Pattern Explained With Examples and Charts
A golden cross is a candlestick pattern that is a bullish signal in which a relatively short-term moving average crosses above a long-term moving average
more
Worden Stochastics Definition
The Worden Stochastics indicator plots the percentile rank of the latest closing price compared to other closing values in the lookback period.
more
What Is a Crossover in Technical Analysis, Examples
A crossover is the point on a stock chart when a security and an indicator intersect.
more