What Is the FDIC?

The Federal Deposit Insurance Corporation (FDIC) is an independent agency that provides deposit insurance for bank accounts and other assets in the United States if financial institutions fail. The FDIC was created to help boost confidence in consumers about the health and well-being of the nation's financial system.

Although most people realize that the funds in their checking and savings accounts are insured by the FDIC, few are aware of its history, its function, or why it was developed. Initiated in 1933 after the stock market crash of 1929, the FDIC continues to evolve as it finds alternative ways to protect deposit holders against potential bank insolvency. Keep reading to find out more about the federal agency and some of its achievements over the years.

The Beginning of the FDIC

America's financial markets lay in ruin by the early 1930s. More than 9,000 banks failed by March of 1933 because of the financial chaos triggered by the stock market crash of October 1929, signaling the worst economic depression in modern history.

"On March 3, banking operations in the United States ceased. To review at this time the causes of this failure of our banking system is unnecessary. Suffice it to say that the government has been compelled to step in for the protection of depositors and the business of the nation."

Congress took action to protect bank depositors by creating the Emergency Banking Act of 1933, which also formed the FDIC. The FDIC's purpose was to provide economic stability to the failing banking system. Officially created by the Glass-Steagall Act of 1933 and modeled after the deposit insurance program initially enacted in Massachusetts, the FDIC guaranteed a specific amount of checking and savings deposits for its member banks.

The period from 1933 to 1983 was characterized by increased lending without a proportionate increase in loan losses, resulting in a significant increase in bank assets. Lending increased from 16% to 25% of industry assets in 1947 alone. By the 1950s, the rate rose to 40% and again to 50% by the early 1960s.

But the FDIC didn't come without criticism. It was originally denounced by the American Bankers Association (ABA) as too expensive, which called it an artificial way to support bad business activity. Despite this, the FDIC was a success when only nine additional banks closed in 1934.

Due to the conservative behavior of banking institutions and the zeal of bank regulators through World War II and the subsequent period, deposit insurance was regarded by some as less important. These financial experts concluded that the system became too guarded and was therefore impeding the natural effects of a free market economy. Nevertheless, the system continued.

Here are some notable items and milestones for the FDIC from its inception to 1983:

Banking operations started to change in the 1960s. Financial institutions began taking nontraditional risks and expanding the branch networks into new territory with the relaxation of branching laws. This expansion favored the banking industry throughout the 1970s, as generally favorable economic development allowed even marginal borrowers to meet their financial obligations. But this trend caught up to the banking industry, resulting in the need for deposit insurance during the 1980s.

The Impact of Inflation

Inflation, high interest rates, deregulation, and recession created an economic and banking environment in the 1980s that led to the most bank failures in the post-World War II period. During the '80s, inflation and a change in the Federal Reserve's monetary policy led to increased interest rates. The combination of high rates and an emphasis on fixed-rate, long-term lending began to increase the risk of bank failures. The 1980s also saw the beginning of bank deregulation.

The most significant of these new laws were the Depository Institutions Deregulation and Monetary Control Act (DIDMCA). These laws authorized the elimination of interest rate ceilings, relaxing restrictions on lending, and overruling the usury laws of some states. During the recession of 1981-1982, Congress passed the Garn-St. Germain Depository Institutions Act, which furthered bank deregulation and the methods for dealing with bank failures. All these events led to a 50% increase in loan charge-offs and the failure of 42 banks in 1982.

An additional 27 commercial banks failed during the first half of 1983, and approximately 200 failed by 1988. For the first time in the post-war era, the FDIC was required to pay claims to depositors of failed banks, highlighting the importance of the FDIC and deposit insurance.

FDIC Timeline from 1983 to Present

Other significant events during this period include:

The FDIC has a very notable history that demonstrates the government's commitment to ensuring that previous bank troubles do not affect citizens as they have done in the past.

The FDIC maintains the DIF by assessing depository institutions and assessing insurance premiums based on the balance of insured deposits as well as the degree of risk the institution poses to the insurance fund. FDIC-insured institutions reported an aggregate net income of $147.9 billion in 2020.

FDIC insurance premiums paid by member banks insure deposits in the amount of $250,000 per depositor per insured bank. This includes principal and accrued interest up to a total of $250,000. In October 2008, the protection limit for FDIC-insured accounts was raised from $100,000 to $250,000.

The new limit was to remain in effect until Dec. 31, 2009, but was extended and then made permanent on July 21, 2010, with the passage of the Dodd-Frank Wall Street Reform and Consumer Protection Act. Depositors who are concerned about ensuring that their deposits are fully covered can increase their insurance by having accounts in other member banks or by making deposits into different account types in the same bank. The same rules hold true for business accounts.

There's a very big distinction between what the FDIC insures and what it doesn't. It's important for consumers to know the difference.

What Happens When a Bank Fails?

Federal law requires the FDIC to make payments of insured deposits "as soon as possible" when an insured institution fails. Depositors with uninsured deposits in a failed member bank may recover some or all of their money depending on the recoveries made when the assets of the failed institutions are sold. There is no time limit on these recoveries, and it sometimes takes years for a bank to liquidate its assets.

If a bank goes under and is acquired by another member bank, all direct deposits, including Social Security checks or paychecks delivered electronically, are automatically deposited into the customer's account at the assuming bank. If the FDIC cannot find a bank to assume the failed one, it tries to make temporary arrangements with another institution so that direct deposits and other automatic withdrawals can be processed until permanent arrangements can be made.

There are two common ways that the FDIC takes care of bank insolvency and bank assets. The first is the purchase and assumption (P&A) method, where all deposits are assumed by another bank, which also purchases some or all of the failed bank's loans or assets. The failed bank's assets are put up for sale and open banks can submit bids to purchase parts of its portfolio.

The FDIC may sell all or some assets with a put option. This allows the winning bidder to put back assets transferred under certain circumstances. All asset sales reduce the net liability to the FDIC and insurance fund for bank losses. The FCIC may use the payoff method if it doesn't get a bid for a P&A transaction, in which case it pays off insured deposits directly and attempts to recover these payments by liquidating the receivership estate of the failed bank. The FDIC determines the insured amount for each depositor and pays them directly with all interest up to the date of failure.

The FDIC's history and evolution show its commitment to insuring bank deposits against bank failure. By assessing premiums due to bank assets and assumed risk of failure, it has amassed a fund it feels can indemnify consumers against anticipated bank losses.

Learn more about the institution, its services, and its purpose by visiting the FDIC website. This site also allows consumers to investigate the standing and risks borne by member banks, make complaints about the industry or a specific bank's practice, and find information on asset sales and recoveries. 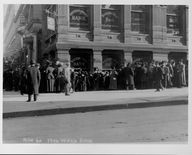 What Happens When A Crypto Exchange Goes Bankrupt?

Are All Bank Accounts Insured by the FDIC?

FTX US And Four Other Firms Aren't Insured, FDIC Says