Exchange-traded funds (ETFs) have become one of the most popular investment vehicles for both institutional and individual investors. Often promoted as cheaper and better than mutual funds, ETFs offer low-cost diversification, trading, and arbitrage options for investors.

Now with ETFs regularly boasting billions of dollars in assets under management, new ETF launches number from several dozen to hundreds in any particular year. ETFs are so popular that many brokerages offer their customers free trading in a limited number of ETFs.

ETFs started as an outgrowth of the index investing phenomenon. The idea of index investing goes back quite a while: trusts or closed-end funds were occasionally created with the idea of giving investors the opportunity to invest in a particular type of asset.

However, none of these really resembled what we now call an ETF. In response to academic research suggesting the advantages of passive investing, Wells Fargo and American National Bank both launched index mutual funds in 1973 for institutional customers.﻿﻿﻿﻿﻿ Mutual fund legend John Bogle would follow a couple of years later, launching the first public index mutual fund on Dec. 31, 1975. Called the First Index Investment Trust, this fund tracked the S&P 500 and started with just $11 million in assets.﻿﻿﻿﻿﻿﻿﻿ Referred to derisively by some as "Bogle's folly," the assets of this fund, now known as the Vanguard 500 Index Fund, were at $441 billion when Bogle died in 2019.﻿﻿﻿﻿﻿

Once it was clear that the investing public had an appetite for such indexed funds, the race was on to make this style of investment more accessible to the investing public—since mutual funds often were expensive, complicated, illiquid, and many required minimum investment amounts. ETFs, like a passively managed mutual fund, attempt to track an index, often by the use of computers, and are also intended to mimic the market.

The ETF Is Born

According to Gary Gastineau, author of "The Exchange-Traded Funds Manual," the first real attempt at something like an ETF was the launch of Index Participation Shares for the S&P 500 in 1989. Unfortunately, while there was quite a bit of investor interest, a federal court in Chicago ruled that the fund worked like futures contracts, even though they were marginalized and collateralized like a stock; consequently, if they were to be traded, they had to be traded on a futures exchange, and the advent of true ETFs had to wait a bit.

The next attempt at the creation of the modern Exchange Traded Fund was launched by the Toronto Stock Exchange in 1990 and called Toronto 35 Index Participation Units (TIPs 35). These were a warehouse, receipt-based instrument that tracked the TSE-35 Index.

Three years later, the State Street Global Investors released the S&P 500 Trust ETF (called the SPDR or "spider" for short) on January 22, 1993. It was very popular, and it is still one of the most actively-traded ETFs today. Although the first American ETF launched in 1993, it took 15 more years to see the first actively-managed ETF reach the market.

Barclays entered the ETF business in 1996 and Vanguard began offering ETFs in 2001. As of February 2021, there were 160 distinct issuers of ETFs.

The Growth of an Industry

Examples of Some Important ETFs

The second-largest ETF, the iShares Core S&P 500 ETF (NYSE: IVV) began trading in May of 2000. This fund boasted over $243 billion in assets under management in February 2021 and had a one-month average trading volume of 4.5 million shares per day.

The iShares MSCI EAFE ETF (NYSE:EFA) is the largest foreign equity ETF. The EFA launched in August of 2001 and holds about $53.5 billion in assets as of February 2021.

The Invesco QQQ (NYSE:QQQ) mimics the Nasdaq-100 Index and held assets of approximately $157 billion in February 2021. This fund launched in March of 1999.

Last and not least, the Bloomberg Barclays TIPS (NYSE:TIP) fund began trading in December of 2003 and had grown to over $27 billion in assets under management in February 2021.

While ETFs do offer very convenient and affordable exposure to a huge range of markets and investment categories, they are also increasingly blamed as sources of additional volatility in the markets. This criticism is unlikely to slow their growth considerably, though, and it seems probable that the importance and influence of these instruments is only going to grow in the coming years.

Article Sources
Investopedia requires writers to use primary sources to support their work. These include white papers, government data, original reporting, and interviews with industry experts. We also reference original research from other reputable publishers where appropriate. You can learn more about the standards we follow in producing accurate, unbiased content in our editorial policy.
Ready to Take the Next Step?
×
The offers that appear in this table are from partnerships from which Investopedia receives compensation. This compensation may impact how and where listings appear. Investopedia does not include all offers available in the marketplace.
Service
Name
Description
Part Of
Exchange-Traded Fund Guide
Related Articles 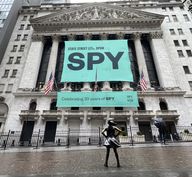 Who Are the ETF Giants?

Index Fund vs. ETF: What's the Difference?
Partner Links
Related Terms
What Is an Index? Examples, How It's Used, and How to Invest
An index measures the performance of a basket of securities intended to replicate a certain area of the market, such as the Standard & Poor's 500.
more
Energy ETFs
Energy exchange traded funds (ETFs) offer a number of ways to invest in the sector, from oil and gas companies to alternative energy sources.
more
Who Was John Bogle? Vanguard Founder, Father of Indexing
John Bogle founded the Vanguard Group and before his death served as a vocal proponent of index investing.
more
Spiders (SPDR): How They Work, Origin and Examples
Spiders (SPDR) are tradable ETFs that closely follow the performance of the benchmark S&P 500 or sectors within the index.
more
Blue-Chip Index
A blue-chip index seeks to track the performance of financially stable, well-established companies that provide investors with consistent returns.
more
Exchange Traded Product (ETP): Definition, Types, and Example
Exchange traded products (ETPs) are types of securities that track underlying securities, an index, or other financial instruments. ETPs trade on exchanges similar to stocks.
more