One extremely well-known facet of high-yield bonds, or junk bonds, is that they are particularly vulnerable to stressed market conditions like those that emerge during a depression or recession, such as the recession of 2008. This vulnerability to stress in the market, as revealed by many studies, is indeed more pronounced in the junk bond market than with investment-grade bonds.

This phenomenon isn’t hard to explain. As the economy weakens, opportunities for businesses to secure funding begin to become more and more scarce and the competition for those dwindling opportunities becomes more intense in response. The ability of companies who owe such debts to be able to make good on them begins to diminish as well. All of these conditions mean that more companies hit worst-case scenarios, or bankruptcy, more often when the market experiences stress.

Investors, of course, are aware of this. They naturally begin to sell off the bonds in their portfolio with the highest risk, which only makes matters worse for those companies most exposed and with the poorest cash to debt ratio. The laws of supply and demand can clearly be seen playing out as the demand for high yield bonds dry up, and they must offer lower prices in order to try to continue to secure needed investments.

The so-called junk bond market primarily includes the past 35 to 40 years. Some argue the junk bond market has only existed for the past three to four decades, dating back to the 1970s when these types of bonds began to become more and more popular, and new classes of issuers began to emerge as greater numbers of companies began to use them as financial debt instruments.

The Savings & Loan Crisis of the 80s

Along the way to prominence, junk bonds have hit several bumps in the road. The first major hiccup came with the now infamous Savings & Loan Scandal of the 1980s. At that time, S&L companies over-invested in higher-yielding corporate bonds along with significantly higher-risk practices that ultimately led to a huge crash in the performance of junk bonds that persisted for nearly a decade and into the 1990s.

The junk bond market grew exponentially during the 1980s from a mere $10 billion in 1979 to a whopping $189 billion by 1989, an increase of more than 34% each year. Throughout this decade, junk bond yields averaged around 14.5% with default rates just a little over two at 2.2%, resulting in annual total returns for the market somewhere around 13.7%.

However, in 1989 a political movement involving Rudolph Giuliani and others who had dominated the corporate credit markets prior to the rise of high yield bonds caused the market to temporarily collapse resulting in Drexel Burnham’s bankruptcy. In a change that took perhaps as little as 24 hours, new junk bonds basically disappeared from the market with no rebound for about a year. This resulted in investors losing a net 4.4% on the high-yield market in 1990 – the first time the market had returned negative results in more than a decade.

Many companies that used high yield bonds to finance themselves during the “dot-com” boom of the late 1990s soon failed, and along with them, the high yield market took another turn for the worst in terms of net returns. This crash did not result from the actions of someone trying to sabotage the market or by unscrupulous S&L investors. Instead, this bust happened because investors kept falling for the dream of huge profits that the Internet promised through its ability to reach a global market. Investors put their money into ideas, not solid plans, and as a result, the market faltered.

However, once this error became clear, investors began to back more solid choices in the high-yield bond market and it was able to recover quickly. During 2000-2002, the default average for the market was 9.2%, nearly four times higher than the period of 1992-1999. During this period, the average total return rate dipped as low as 0% with 2002 setting the record number of defaults and bankruptcies before these numbers fell again in 2003.

When the subprime scandal broke, many of what were called “toxic assets” involved in the crisis were in fact linked to high yield corporate bonds. The scandal here arises from these subprime or high yield assets being sold as AAA-rated bonds instead of “junk status” bonds. When the crisis hit, junk bond yield prices fell and thus their yields skyrocketed. The yield-to-maturity (YTM) for high-yield or speculative-grade bonds rose by over 20% during this time with the results being the all-time high for junk bond defaults, with the average market rate going as high as 13.4% by Q3 of 2009.

Nevertheless, despite all these setbacks and external blows to the junk bond market – as well as to the secondary market – always seem to recover. Issuers continue to turn to the high-yield bonds, which certain investor groups and private investors have been happy to purchase. This enduring strength, therefore, is built upon both the enduring need of companies for capital as well as the enduring desire of investors for higher return-on-investment tools than investment-grade bond offerings. 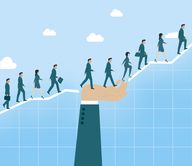 How to Pick the Right Bonds for Your IRA

The Bond Market: A Look Back
Partner Links
Related Terms
High Yield Bond: Definition, Types, and How to Invest
High-yield bonds (also called junk bonds) are bonds that pay higher interest rates because they have lower credit ratings than investment-grade bonds.
more
The Bond Market (aka Debt Market): Everything You Need to Know
The bond market is the collective name given to all trades and issues of debt securities. Learn more about corporate, government, and municipal bonds.
more
Federal Savings and Loan (S&L)
A federal savings and loan is an institution of thrift that focuses on residential mortgages.
more
What Is a Junk Bond? Definition, Credit Ratings, and Example
Junk bonds are debt securities rated poorly by credit agencies, making them higher risk (and higher yielding) than investment grade debt.
more
Savings and Loan Crisis (S&L): What Happened and Aftermath
The savings and loan (S&L) crisis was a financial disaster that caused the failure of more than 1,000 U.S. savings and loans in the 1980s and 1990s.
more
Guide to Fixed Income: Types and How to Invest
Fixed income refers to assets and securities that bear fixed cash flows for investors, such as fixed rate interest or dividends.
more
Dialog Heading