Gold has always been considered a great investment. Historically used as a currency, investors often consider this precious metal as a hedge against inflation. That's because gold has an inverse relationship to the U.S. dollar, leading many to flock to it as a safe haven. But that's not all. Many professionals believe that taking a position in the commodity also helps diversify a portfolio and mitigate risk.

If you want to invest in gold but don't want the hassles associated with the actual physical commodity, you may want to consider an exchange-traded fund (ETF). Commodity ETFs, including those that deal in gold, track the performance of broad commodity indexes.

The VanEck Vectors Gold Miners (GDX) ETF is one of the most liquid vehicles on the market. It helps those who want to gain exposure to gold mining companies. It was established in the midst of gold's bull market as securities were created to satiate the appetite of precious metals investors. Keep reading to learn more about this ETF, including its performance history, composition, and whether it's right for you.

The company believes that gold and gold companies have strong potential for growth. The possibility of higher gold prices remains likely because of interest rates, monetary policy, and high levels of corporate debt. Smaller gold companies have shown promise of growth in the past because of the price of gold and may continue to outperform larger, more established companies.

Morningstar rated the ETF with three out of five stars overall as of March 31, 2021. This was compared against 61 other funds. This puts the fund in the middle of the pack. It received a four-star rating and a three-star rating in the three-year and five-year categories respectively. A four-star rating means the fund outperforms its peers.

What's in the Portfolio?

There are 53 holdings under the ETF, all of which are stocks. This means the portfolio contains no bonds, cash, or other vehicles. The majority of these holdings are gold miners listed in Canada, the United States, and Australia. The ETF's top five holdings as of March 31, 2021, are:

The goal of this ETF is to mimic the price and performance of the NYSE Arca Gold Miners Index. This benchmark index tracks the overall performance of companies involved in the gold mining industry. It is market-capitalization-weighted, meaning that larger companies are given more representation.

The portfolio is rebalanced every quarter. This is meant to reflect changes in the benchmark index.

The minimum amount of revenue companies must earn from gold mining in order to be added to the index.

This is unusual, given that gold was up more than 158% since the ETF was launched, as of April 22, 2021. The revenues and earnings of gold mining companies also point to how strange this is since they are tied to gold prices. So why the discrepancy?

The divergence is due to gold mining companies cutting production just as prices rose and expanding operations just as gold prices peaked. This mismanagement has led to frustration for many gold miner bulls.

Who Should Consider GDX?

GDX comes with certain risks. Rising gold prices don't necessarily mean its shares will also rise. But a drop in the price of gold will likely ensure a fall in GDX. In the right environment, though, the ETF may deliver spectacular returns. Between October 2008 and May 2011, it rose nearly 300% as gold climbed 115% over the same period.

GDX is considered a speculative investment. That makes it well suited for sophisticated investors comfortable with the risk. The ultimate driver of its is earnings from gold mining companies. The largest variable that affects earnings in the short term is the price of gold, something that is notoriously difficult to predict due to its lack of cash flow and emotionally driven buying and selling.

Gold prices normally do well during periods of financial uncertainty and inflation, and when interest rates fall. People lose confidence in yield-generating financial assets when the economy is failing and often turn to gold for safety. Since gold does not generate income, it becomes less desirable when interest rates are high. This makes falling interest rates a positive tailwind for gold prices.

Inflationary pressures erode the value of currencies, increasing the attractiveness of hard assets like gold.

Since miners dig gold out of the ground, their share prices rise in these conditions as the market discounts higher future cash flows. Their profits are tied to gold prices, as they have a fixed cost of extracting gold. Say a gold miner's total cost to dig out one ounce of gold is $800. If the gold price rises from $1,000 to $1,200 per ounce, then their profit doubles to $400 from $200 even though the gold price is only up 20%. So if someone is very bullish on gold, investing in gold mining companies helps them take advantage of this price/cost relationship.

The VanEck Vectors Gold Miners ETF is most appropriate for traders or investors who are bullish on gold and fear inflation or a future financial crisis. It is not an ETF made for the casual investor, who hopes their investment will appreciate over time.

In the appropriate conditions, GDX may be one of the few assets that gains value but it is important to pay attention to the management decisions of the companies included in its portfolio, as their actions have the most impact on the ETF as opposed to the actual price of gold. 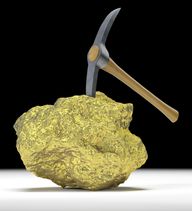 Why Gold Matters: Everything You Need to Know

What ETFs Track the Metals and Mining Sector?

How to Trade Gold in 4 Steps
Partner Links
Related Terms
Gold Fund
A gold fund is a type of investment fund that commonly holds physical gold bullion, gold futures contracts, or gold mining companies.
more
Precious Metals: Definition, How to Invest, and Example
Precious metals are rare metals that have a high economic value, such as gold, silver, and platinum.
more
Basic Materials Sector: Definition, Examples, and Stocks
The basic materials sector is an industry category of businesses engaged in the discovery, development, and processing of raw materials.
more
Silver ETF
A silver exchange-traded fund (ETF) invests primarily in raw silver assets, which are held in a trust by the fund manager or custodian.
more
Bullion: What It Is, How It's Used, and Ways To Invest in It
Bullion refers to gold and silver that is officially recognized as being at least 99.5% pure and is in the form of bars or ingots rather than coins.
more
Guide to Fixed Income: Types and How to Invest
Fixed income refers to assets and securities that bear fixed cash flows for investors, such as fixed rate interest or dividends.
more