Fake asset recovery companies solicit victims of financial scams, promising to recover lost funds for a fee in advance. It sounds good, except for one problem—they do little to nothing to help and disappear with the fee.

There are a lot of different scam artists out there who want to take your hard-earned money. Being scammed by some of these fraudulent money-making schemes can be a hard pill to swallow. But it's even worse to be duped again—especially by someone who promises to recover your assets. Learn more about how these people work and what to look out for to avoid being taken in by these professional scammers.

Most scammers compile a list of people who have been duped and sell that information to others, including asset recovery scam artists. Scammers can find potential prey by compiling names and contact information of victims from court filings, for example.

These people cold call previous victims who've lost thousands of dollars and claim their expertise can get an individual's money back. Victims are usually desperate to recoup their losses. They often willingly pay the upfront fee, which can be anywhere from several hundred to thousands of dollars, putting themselves in a bigger financial hole. Subsequently, the asset recovery scammers never manage to recoup any assets. When the victims try to follow up, they get strung along or can't even get anyone on the phone.

In a less-brazen variant on the scheme, the asset recovery company will perform services. But these are usually things the consumer can do for free. Let's say, for example, that someone fraudulently used a credit card to pay for something in the original scam. The asset recovery company will dispute the charge with the credit card company on their client's behalf and charge hundreds of dollars to do so, for its time, trouble, and so-called legal expertise. In reality, all it takes to fight a disputed charge is a phone call to the card issuer, which has entire departments set up to handle this sort of thing, at no expense to the cardholder.

These fraudulent companies will often submit a complaint to an agency like the Consumer Financial Protection Bureau (CFPB) and ask you for funds to cover the costs of the submission. But the CFPB is a public regulatory agency, which doesn’t charge a fee. Other con games include filing claims that are too old to be valid from a legal standpoint or failing to provide the proper supporting documentation.

If you previously have been a victim of fraud, you are a more likely target for additional scams because fraudsters know they have a greater chance of success.

Example of an Asset Recovery Scam

In 2015, the Federal Trade Commission (FTC) banned an outfit called Consumer Collection Advocates from selling any recovery services after the agency discovered it falsely claimed it could recover money for consumers who were the victims of schemes. The firm had been collecting fees from people, many of them elderly, who had already been hurt by timeshare resale and precious metals investment frauds.

After receiving numerous complaints, the CFPB and Securities and Exchange Commission both issued advisories in 2016 warning older consumers and investors to be on the lookout for asset recovery scams.﻿﻿﻿﻿﻿

How can consumers spot a fake asset recovery company? According to the CFPB, a telltale sign that something is amiss is if the company asks for an upfront fee. Any requests for payment in advance should set off alarm bells. Most reputable firms don’t charge a fee until services are rendered. Consumers should also be wary of a firm that does any of the following:﻿﻿

As a consumer, you have the right to take your time and seek guidance when making a financial decision. Alarm bells should go off if the company doesn't afford you that time.

Claims to have inside information

Beware of a firm that claims to have inside information or government connections that can help you recover your lost assets. As it costs nothing to file a complaint with a federal agency, any firm that says it has special access or contacts is probably lying.

If the company discourages you from seeking supporting information or advice from friends, family members, or legal advisors, it is likely trying to trick you into paying for a useless service.

The best action to take if you receive a call from one of these characters, especially if it's unsolicited, is to hang up the phone.

What to Do If You've Been Scammed

If you think you were the victim of an asset recovery scam, the good news is you have some recourse. If you used a credit or debit card to pay for a service, contact your bank or credit card company immediately to let it know of the fraud and to prevent additional charges from appearing on your card. If you file a dispute within 60 days, you may be able to recoup your losses. You should also contact local law enforcement and file complaints with the CFPB and the FTC.

With money-making scams a fairly common occurrence these days, consumers have to be on the lookout for any attempts at financial fraud. That includes the ultimate addition of insult to injury—a scammer who targets victims of a previous con, luring them in with bogus promises that it can recover all their lost money. At best, this schemer will charge you for actions you could do on your own for free, but at worst, they will collect funds for doing absolutely nothing.

Any firm that wants you to pay upfront, claims to have an in with regulators and law enforcement agencies, pressures you, or requests confidentiality should raise red flags.

The Most Common Types of Consumer Fraud

Cryptocurrency Scams: How to Spot Them, Report Them, and Avoid Them 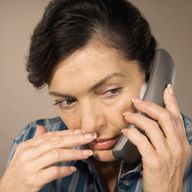 I Think I’ve Been Scammed! What Do I Do?

Credit Scams to Watch Out For

The Most Common Student Loan Scams and How to Avoid Them
Partner Links
Related Terms
What Is Spoofing? How Scam Works and How To Protect Yourself
Spoofing is a scam in which criminals try to obtain personal information by pretending to be a legitimate business or another known, trusted source.
more
What Is Identity Theft? Definition, Types, and Examples
Identity theft occurs when your personal or financial information is used by someone else to commit fraud.
more
Credit Repair Organizations Act (CROA)
The Credit Repair Organizations Act (CROA) is a piece of consumer protection legislation that regulates companies offering credit repair services.
more
Phishing
Phishing is a method of identity theft carried out through the creation of a fraudulent website, email, or text appearing to represent a legitimate firm.
more
Nigerian Letter Scam Definition and How to Avoid It
The Nigerian letter scam involves an offer to receive a substantial sum of money in exchange for providing financial details and an upfront payment.
more
What Is Fraud? Definition, Types, and Consequences
Fraud, in a general sense, is purposeful deceit designed to provide the perpetrator with unlawful gain or to deny a right to a victim.
more