CNBC's Shark Tank has taken entrepreneurs and their pitches to the airwaves, making for some great television. Watching the show, it's obvious that not everyone is cut out for the business world. It takes a lot of patience, time, and of course, money. But in order to succeed, you also need a great idea and know how to pitch it to investors, called "sharks" on the show.

Many starry-eyed entrepreneurs who end up on Shark Tank walk away disappointed, unable to win over the sharks. Still, there are entrepreneurs who blaze their own path forward anyway. After all, just appearing on the show is good publicity, and the sharks aren't always right. Here are three Shark Tank "failures" that weren't funded, but made millions anyways.

Shark Tank has led many entrepreneurs down the path to success and riches. If you're not familiar with it, it's a popular reality TV show that has been on the air since 2009. Entrepreneurs seeking funding and investors are invited onto the show to make sales pitches to the "sharks," all of whom are deemed, successful businesspeople. The sharks, who are the likely investors, try to pull out the strengths and weaknesses of each pitch before making funding proposals to the business owners.

Now available on Hulu in addition to CNBC, the premise of the show was inspired by Japan's Tigers of Money television show.

The majority of the most successful products pitched on the show have been backed by the sharks, and many participants leave the show with a deal. Others aren't so lucky. Still, there are some contestants who are unwilling to accept the terms and walk away. Nonetheless, many entrepreneurs who left without deals have gone on to enjoy great success with their products.

It's important to note that while the sharks are paid to be on the show, the money they invest in the entrepreneurs' companies—if they choose to do so—is all their own.

The money that Shark Tank investors offer is their own money and is not provided by the show.

When Jamie Siminoff appeared on the show in 2013, he pitched the DoorBot, a caller ID for your door—the doorbell with an integrated video camera that sends alerts and the video feed directly to the owner's smartphone.﻿﻿ Homeowners are then able to see and speak with whoever is at the front door, or ignore the visitor completely.

The device allows homeowners to give the impression they are home when they could be anywhere in the world. Since many burglars tend to ring the doorbell to see if anyone is home before a break-in, the device comes in very handy as an added security measure.

During his appearance on the show, Siminoff was already registering $1 million in annual sales and seemed confident the sharks would fight for the chance to invest. He asked for $700,000, valuing his company at $7 million. One by one, however, all of the sharks backed out except for Kevin O'Leary, who offered a $700,000 loan, a claim to 10% of all sales until the loan was paid off, a 7% royalty on all future sales, and 5% of the company's equity.

Siminoff turned the deal down and left empty-handed.

After taping the show, sales continued to improve and Siminoff raised the $700,000 from other sources before the show even aired. After DoorBot aired on Shark Tank, Siminoff said sales jumped an additional $5 million.﻿﻿ Billionaire Richard Branson was subsequently part of a group of venture capital (VC) investors that put $28 million into what was now called Ring, giving the company a $60 million valuation. In early 2017, the company raised a whopping $109 million from VCs.﻿﻿

A little more than a year later, Amazon bought the smart doorbell maker for more than $1 billion.﻿﻿﻿﻿﻿ Amazon previously invested in Ring through its Alexa Fund investment arm that exclusively invests in Alexa-powered devices. By the time of the acquisition, Ring had raised $209 million and was last valued at $760 million, according to Pitchbook. Siminoff has since been a guest Shark on the show.

Branding itself as the online dating site that women prefer, Coffee Meets Bagel aims to find one quality match for users every day using friend connections on Facebook. If both parties like the proposed match, the app offers them a discount to use on their dates, such as getting a cup of coffee or a bagel. The app was first released in April 2012 in New York City and then launched in Boston and San Francisco later the same year.

When sisters Arum, Dawoon, and Soo Kang appeared on Shark Tank in 2015, they were offering the sharks a 5% equity stake for $500,000. Impressed with the presentation and the product, Mark Cuban made the largest offer in the show’s history—$30 million to buy the entire company. Not wanting to walk away from the company, the sisters quickly decided to leave the show with no deal.

After gaining such wide exposure from the show, the Kang sisters raised $23.2 million in over five funding rounds, according to Crunchbase. The app is available on both Android and Apple devices and has reportedly 10 million users.

Inspired by his daughter's interest in vegetarianism and recognizing a market opportunity, Shawn Davis pitched his specialty seafood burger business to the sharks in 2011, asking for $200,000 for a 25% equity stake of the company. Davis wanted to tap into the vegetarian market with foods such as burgers that relied upon seafood rather than traditional meat sources.

The sharks thought the venture was too risky and passed on the opportunity. But after the episode aired, angel investors seized the opportunity by offering Davis $500,000. Annual sales for Davis' company, CBS Foods, grew from $30,000 to a projected $5 million in just one year, and Davis began to produce his "Original Shrimp Burger" product. In 2017, Cuban admitted that he regretted not investing in food innovation.

CBS products were originally sold in grocery stores. Eventually, Davis' company ended its grocery store relationships, opting instead to sell its product line to restaurants, including the ones it operates. Davis has now started franchising. 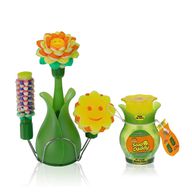 How Robert Herjavec of 'Shark Tank' Made His Money

10 Successful Young Entrepreneurs
Partner Links
Related Terms
What Is a Tontine?
A tontine is a kind of capital investment plan that began in the 17th century in Italy and peaked in the early 1900s in Europe and the U.S.
more
Who Is Shai Agassi?
Shai Agassi is an Israeli entrepreneur and founder of Better Place, a battery charging service for electric cars.
more
Who Is Chamath Palihapitiya?
Chamath Palihapitiya is a highly-successful entrepreneur and venture capitalist based in the San Francisco Bay area.
more
Venture Capital: What Is VC and How Does It Work?
Venture capital is money, technical, or managerial expertise provided by investors to startup firms with long-term growth potential.
more
Entrepreneur: What It Means to Be One and How to Get Started
Entrepreneurs create new businesses, taking on all the risks and rewards of the company. Learn about the challenges facing entrepreneurs and entrepreneurship.
more
Vulture Capitalist
A vulture capitalist is an investor who purchases troubled companies on the cheap and then does whatever it takes to revive and make a profit from them.
more