Looking to make some extra cash? Maybe you need some money for a rainy day, or you're saving up for a great vacation. Perhaps you want to boost your retirement account. Many people look to individual retirement accounts (IRA) or 401(k)s. Others turn to safer bets like savings accounts and certificates of deposit (CDs). Then there are the collectors—people who buy and sell items whose value are far more than their original worth. It is possible to make money by buying and selling collectibles, but there are some things you need to consider. Read on to find out more about the pros and cons of collectibles, as well as some of the things you may find that can bring in some big money.

The Basics of Collectibles

Collectibles are items that can be purchased or sold for much more than their original value. If they're scarce, they can be worth even more. But the condition of the item has a lot to do with how much you can get. The more pristine your collectible, the more you'll be able to get. If it's deteriorated, there's an excellent chance you won't get anything at all.

Keep in mind, though, that collectibles aren't very common, and they may not be as great an investment as you may think. After all, it's a notoriously fickle market—not to mention an expensive and expansive one. People collect all kinds of items, from stamps to stuffed animals. And it takes patience to build a valuable collection.

Let’s say you’ve researched what’s selling now and are contemplating what may make you money in the future. You plan to buy items today at face value and watch their worth increase exponentially. But that can take decades.

It’s easy to track what’s currently selling online. Check what's big on eBay (EBAY). This is where you can also get guidance for putting your own items on the market. Note that many collectibles only retain their value if they’re kept in their original packaging. As eBay explains it, “New in Box” (NIB) means “a collectible that is new, in its box, and has never been removed from its original packaging." “Mint in Box" (MIB), on the other hand, means the item is “in mint condition and in its original box, which has been opened.”

Check eBay to see what's selling and to get guidance on how to market your item.

Here are some ideas for finding collectible items that may be the operative word—gain value in the future.

If you’re a sports fan, you may find sports memorabilia worth pursuing. Maybe caught a fly ball, or better yet, you may have gotten the game ball after the Super Bowl—and had it signed. If that's the case, you may be able to cash in.

But a rise in fake autographs has undermined this once-lucrative market. To establish the authenticity of an autographed item, follow this tip: When you’re getting your sports hero to sign a ball or other item, ask someone to take a photo of you with the athlete while they wield the pen. No one can refute the autograph with that kind of photographic evidence.

Let’s say you’ve already ransacked your home for any unopened toys you might have fortuitously stashed away, such as those original Star Wars figurines that your son turned up his nose at in the last century. Start thinking about what’s current in toys that you could buy today at face value. Toys tied in with movies are usually also a big hit. These items aren’t huge investments, after all.

Disney collectibles always have a strong market. How about limited-edition “Frozen 2” dolls? Oops, too late. There are already several posted on eBay—an Elsa doll is going for $10,000. Nobody could have predicted the runaway phenomenon that is “Frozen.” But let’s consider Disney's latest release "Encanto," it's 60th animated film, which is about a family with magical gifts named the Madrigals who live in the mountains of Colombia, and their daughter Mirabel. It was released on November 24, 2021, but you can still snap up those Encanto plush toys, figures, and apparel.

Once you’ve bought a few items, stash them away carefully in their original boxes, and keep checking their value over the next few years. They could be the next big Disney collectible.

Art photography is a field where collectors have lucked out in recent years. In 2007, three Chicago collectors stumbled upon a huge cache of prints and negatives taken in the 1950s to the 1970s by a then-unknown street photographer named Vivian Maier. After John Maloof, one of the collectors, introduced some of the photos through his blog in 2009, the world quickly recognized Maier’s outsized talent. Since then, numerous books and documentary films have covered her work, with prints starting at $4,000 as of May 2022.

Appraiser Mike Japp tells a similar story of a photographer named Frank Worth. Allowed access to movie sets, Worth captured unposed photos of the stars. His images began appearing just over a decade ago, such as a brooding James Dean slouched in a lawn chair behind a barbed-wire fence on the set of "Giant," estimated to sell for around $7,200.

How do you find an emerging photographer? Visit local galleries and student art shows. You can also try looking online. There’s even a magazine called “Emerging Photographer.” Trust your taste and buy work that you love and want to live with on your walls—even if it doesn’t appreciate. Good art will lift the spirits.

The Future of Electronics

You won’t be surprised to learn that there’s a market for vintage electronic products. An old computer you might once have had trouble unloading could now be worth three times its original price and listed on eBay as “a great conversation piece.” Collectors share tips on websites like VintageComputer.com.

Used electronics don’t necessarily bring huge amounts. For example, a seller recently got $1,449 for a 1984 Original Apple Macintosh 128k. But prices are mounting sky-high for items that are “NIB." A 5 GB Ultra Rare Factory Sealed Apple iPod classic 1st Generation still in its box is listed at $23,000.

Who knows what an original iPad in its unopened box might fetch in 2025? Keep an eye out for the next groundbreaking electronic product to be released and grab it. Apple Watch? Maybe not. But there’s bound to be something amazing coming soon.

Likely, investing in collectibles will always involve a leap of faith. For that reason, it’s wise not to spend too much upfront. After all, there’s no guarantee which items will escalate in value. If you do buy with reselling in mind, be patient. And don’t open that box.

Article Sources
Investopedia requires writers to use primary sources to support their work. These include white papers, government data, original reporting, and interviews with industry experts. We also reference original research from other reputable publishers where appropriate. You can learn more about the standards we follow in producing accurate, unbiased content in our editorial policy.
Take the Next Step to Invest
×
The offers that appear in this table are from partnerships from which Investopedia receives compensation. This compensation may impact how and where listings appear. Investopedia does not include all offers available in the marketplace.
Service
Name
Description
Part Of
Guide to Collectibles
Related Articles 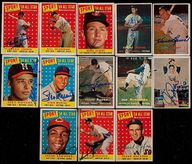 A Guide to Reselling Toys at the Holidays for Extra Money

The Economics of Stamp Collecting

How to Give NFTs As a Gift

Investing in Sports Cards: Is It a Good Place for High Returns?
Partner Links
Related Terms
What's Black Friday? When It Is and Importance to Economists
Black Friday takes place the day after Thanksgiving, is full of big discounts, and is considered the beginning of the holiday shopping season.
more
What Are CryptoPunks?
CryptoPunks are non-fungible tokens (NFTs) that can sell for millions of dollars. They are considered a type of art, sold by Christie’s and Sotheby’s as well as individual owners.
more
Appraisal: Definition, How It Works, and Types of Appraisals
An appraisal is a fair market valuation of property, such as real estate, a business, collectible, or an antique, by the estimate of an authorized person.
more
Ecommerce Defined: Types, History, and Examples
Ecommerce is a business model that enables the buying and selling of goods and services over the Internet.
more
Big-Box Retailer: Definition, Examples, Vs. Small-Box Stores
A big-box store is a retail store that occupies a large amount of space and offers customers a variety of products.
more
Hollywood Stock Exchange (HSX)
The HSX or Hollywood Stock Exchange is an online prediction market where people place virtual bets on the performance of the entertainment industry.
more