Buying a house and renting an apartment represent only two of the possible living arrangements available, and these can both be cost-prohibitive. Co-op housing provides an alternative to the traditional methods of acquiring a primary residence.

A housing cooperative or "co-op" is a type of residential housing option that is actually a corporation whereby the owners do not own their units outright. Instead, each resident is a shareholder in the corporation based in part on the relative size of the unit that they live in. Here, we take a closer look at co-op living.

Owners of a co-op own shares of the cooperative instead of owning their unit outright, which would be the case in a condominium. With some co-ops, owners are allowed to sell their co-op shares in the open market, depending on the market rate for co-ops in that location, subject to approval by the co-op board.

Co-ops are often less expensive than rental apartments because they operate on an at-cost basis, collecting money from residents to pay outstanding bills. In areas where the cost of living is high, such as New York City, co-ops may be an attractive option from a financial perspective. Common fees paid to a co-op, however, may be quite a bit higher than those paid to a condo association.

In addition to the financial aspect of co-op ownership, there are also social aspects that must be taken into account. Smaller co-ops are run strictly by the residents, with everyone pitching in to take care of duties, such as maintenance, landscaping, and setting rules. Large co-ops may be run by a board of directors consisting of a subset of residents.

In either case, there are rules to be followed and a certain degree of social interaction that takes place. If you don't like sharing decision-making authority, co-op living may not appeal to you.

The structure of housing co-ops varies, depending on the specific jurisdiction of its location. In the U.S. and Canada, the most popular options include:

Costs to Purchase a Co-op

Since you are essentially buying shares of a company, be sure to check out the co-op's financial situation and meet the other residents. They will be both your business associates and also your future neighbors. Before buying, you'll want to consider the following:

To purchase shares in a co-op, each buyer takes out a "share loan" instead of a traditional mortgage. These loans operate much like mortgages, but in addition to the loan payments made to the lender, co-op residents are responsible for paying a pro-rata share of the common costs of running and maintaining the building.

Known as "maintenance," these costs are generally paid to the partnership monthly and are billed on an at-cost basis. Maintenance may or may not include real estate taxes, and the annual fees paid to maintenance tend to go up each year with inflation.

The cost of the property's mortgage may also be included in the monthly fee: Even if an individual tenant has paid off their share of the loan, it's possible for the building itself to have a mortgage on it, held by the corporation, not by an individual partner. The share loan pays the cost of buying into the partnership. It has nothing to do with the underlying mortgage on the property itself. Buyers are entitled to all of the tax deductions enjoyed by homeowners, including the deductions for interest and real estate taxes.

Additional expenses include monthly utility bills for each buyer's residence, which are paid on an individual basis, and insurance costs. While the building itself should be covered under a blanket insurance policy, the contents of each individual residence are not. A personal insurance policy, known as an HO-6, is required to protect personal possessions from water damage, fire, theft, and other calamities.

Co-ops must abide by the laws that govern fair housing, but they can be more restrictive than other housing options when it comes to ownership requirements. Because there is no landlord, and there are no tenants, the rules for purchasing shares in the partnership are set by the partners.

For example, new buyers may be required to have a specific net worth or a certain debt-to-income ratio in addition to demonstrating the ability to meet the financial obligations of the co-op purchase.

A background check may also be required. Like other types of housing, some co-ops are designed to cater only to persons 65 years or older, or other specific groups. These more stringent ownership requirements lend an air of security and exclusivity to co-op ownership. In exchange for this exclusivity, co-ops are generally run in a more restrictive manner than condos. High-end units, for example, may forbid subleasing. All partners share in the costs of operating the building.

A default—or failure to pay—by one partner may require the other partners to cover that partner's costs, although the strict ownership requirements generally keep defaults to a minimum.

Condominiums are multi-unit dwellings with privately owned residences that maintain shared common areas and infrastructure such as elevators, basements, or rooftops. Condominiums are classified as real property, meaning that buyers own the deeds to their dwellings. If you are considering buying a condo, it is beneficial to research your mortgage options using a mortgage calculator like the one below.

Always read the co-op's articles of incorporation, bylaws, subscription agreement, rules, and any other available documentation. Make sure you truly understand how the cooperative works, including how it is managed, what you will be required to pay for, and how much that payment will be. Ask about the terms of any underlying mortgage, the policy toward pets, and your ability to make changes to your residence. There's no harm in asking questions; a little extra effort up front can go a long way toward ensuring a harmonious long-term living arrangement.

Mortgage lending discrimination is illegal. If you think you've been discriminated against based on race, religion, sex, marital status, use of public assistance, national origin, disability, or age, there are steps you can take. One such step is to file a report to the Consumer Financial Protection Bureau or with the U.S. Department of Housing and Urban Development (HUD).

Do I Pay Capital Gains Taxes on a House That My Company Sells Back to Me?

9 Things to Know About Homeowner Associations 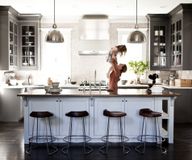 Are There Credits for First-Time Homebuyers?
Partner Links
Related Terms
Homeowners Association (HOA) Fee
An HOA fee is a recurring fee paid by some homeowners to an organization that helps maintain and improve their property and others in the same group.
more
Timeshare: What It Is, How It Works, Types of Ownership
A timeshare is a shared ownership model of vacation real estate in which multiple buyers own the rights to use the same property at different times.
more
What Is a Condominium? How Condos Work Compared to Apartments
Condos or condominiums are housing units in a large property complex that are sold to buyers. While apartments are generally rented, condos are owned.
more
Property Manager: Definition, Job, Pros & Cons of Hiring One
A property manager oversees and manages the daily operations of a real estate property.
more
What Is a Homeowners Association (HOA) and How Does It Work?
A homeowner association (HOA) makes and enforces rules for a subdivision, planned community, or condominium building; its members are residents.
more
Commercial Real Estate Definition and Types
Commercial real estate is property used for business purposes rather than as a living space. It includes offices, industrial units, rentals, and retail.
more