Dipping into your 401(k) plan is generally a bad idea, according to most financial advisors. But that advice doesn't deter about a quarter of the people who hold one of these accounts from making a raid on their funds.

Some of these plan holders withdraw money outright from their account, often under hardship provisions that allow such a discharge of funds. But about three times as many people instead borrow temporarily from their 401(k) or from a comparable account, such as a 403(b) or 457, according to data from the Transamerica Center for Retirement Studies.

Such a loan can seem alluring. Most 401(k)s allow you to borrow up to 50% of the funds vested in the account, to a limit of $50,000, and for up to five years. Because the funds are not withdrawn, only borrowed, the loan is tax-free. You then repay the loan gradually, including both the principal and interest.

The interest rate on 401(k) loans tends to be relatively low, perhaps one or two points above the prime rate, which is less than many consumers would pay for a personal loan. Also, unlike a traditional loan, the interest doesn't go to the bank or another commercial lender, it goes to you. Since the "interest" is returned to your account, some argue, the cost of borrowing from your 401(k) fund is essentially a payment back to yourself for the use of the money.

These distinctions prompt select financial counselors to endorse retirement-fund loans, at least for people who have no better option for borrowing money. Many more advisors, though, counsel against the practice, almost no matter the circumstances. Borrowing from your 401(k), they say, goes against almost every time-tested principle of long-term investing.

Why Borrowing Is (Usually) a Bad Idea

Here are eight key reasons you probably shouldn't dip into your 401(k) plan until retirement or use it before that as a piggy bank for loans.

1. Repayment will cost you more than your original contributions.

The leading purported plus of a 401(k) loan—that you're simply borrowing from yourself, for a pittance—quickly becomes questionable once you examine how you'll have to repay the money.

Keep in mind that the funds you're borrowing were contributed to the 401(k) on a pre-tax basis. But you'll be paying yourself back for the loan with after-tax money. If you are in the 24% tax bracket, for example, every $1 you earn to repay your loan actually leaves you with only 76 cents for that purpose; the rest goes to income tax.

Put another way, in such a tax bracket, making your fund whole again would essentially require almost one-quarter more work than was the case when you made the original contribution.

While you're borrowing funds from your account, they won't be earning any investment return. Those (probable) missed earnings need to be balanced against the supposed break you're getting for lending yourself money at a low-interest rate.

"It is common to assume that a 401(k) loan is effectively cost-free since the interest is paid back into the participant’s own 401(k) account," says James B. Twining, CFP®, CEO and founder of Financial Plan, Inc., in Bellingham, Wash. However, Twining points out that "there is an 'opportunity' cost, equal to the lost growth on the borrowed funds. If a 401(k) account has a total return of 8% for a year in which funds have been borrowed, the cost on that loan is effectively 8%. (That's] an expensive loan."

3. You may contribute less to the fund while you have the loan

If you borrow money from your 401(k) account, some plans have a provision that prohibits you from making additional contributions until the loan balance is repaid. Even if your plan doesn't stipulate this, you may be unable to afford to make contributions while you're repaying the loan.

Such a freeze in additional funding will deprive the account of money that should, in the long run, multiply many times in value through compound earnings. Most calculations suggest that your money will double, on average, every eight years while invested. The gap in what you might have made will be wider still if your skipped contributions lead to missed matches to those funds by your employer—since such a perk essentially represents free investment money for you.

4. If your financial situation deteriorates, you could lose even more money.

The drawbacks above assume you'll be able to make the scheduled payments to your fund on time and without undue hardship. And the vast majority—90%, in fact—of those who borrow from their 401(k) plans are able to do just that, according to a study by the Wharton Pension Research Council.

However, should you be unable to repay the loan, its financial implications go from bad to worse. That's because, should you default on a 401(k) loan, the loan is converted to a withdrawal. As a result, unless you happen to qualify for a hardship withdrawal, the outstanding loan balance will be subject, at minimum, to taxation at your current income tax rate. If you're under the age 59½, you'll also be assessed a 10% early withdrawal penalty on the amount you've borrowed.

5. A job loss or departure resets the repayment clock.

If you quit or otherwise lose your job, you'll have only a mandated time within which you'll be required to repay an outstanding loan from your 401(k) or another retirement fund. Tax reforms that went into effect in 2018 lengthened that time from the previous 60 days after you leave a job to the due date of your next federal tax return, provided it's at least 60 days after your departure from the job.

Still, leaving your employer when you have an outstanding 401(k) loan is restrictive, to say the least. You'll be forced to come up with the outstanding balance in less time, most likely, than the five years, you would customarily have. If you can't repay the money, the loan will be treated as a withdrawal, with all the attendant implications for paying income tax and penalties.

Alternatively, the presence of a loan you'll have trouble repaying soon could handcuff you to a job you no longer enjoy, or force you to pass up a better opportunity should one come along.

The amount that plan participants in their 20s borrow, on average, from their 401(k)s.

Advisors who counsel against taking a 401(k) loan do so in part because these assets may one day represent the last possible asset to stave off financial disaster. If you exercise this "nuclear option" and tap the money now, when other options may still be available, your 401(k) may be depleted, at best, and its assets won't be there if and when your finances are truly desperate.

7. A loan may encourage you to perpetuate poor financial practices.

Borrowing from your future in such a literal way may—indeed, should—encourage you to examine if and how you got to this point in your finances. The need to borrow from savings can be a helpful red flag—a warning that you are living beyond your means and need to consider changes to your lifestyle.

When you can't find a way to fund your lifestyle, other than by taking money from your future, it's time to seriously re-evaluate your spending habits. That includes creating, or adjusting, your budget and making an orderly plan to clear any accumulated debts.

8. You're unlikely to repay the loan quickly.

Advisers warn against having high confidence that you'll repay a loan from your 401(k) in a timely way—that is, in less than the five years that you're usually allowed to take out the funds. "People think that they will make up a withdrawal later, but it pretty much never happens," says Chris Chen, CFP®, wealth strategist, Insight Financial Strategists LLC, Waltham, Mass.

In part, that's because of the surprisingly large principal of such loans, especially among young people. Those who raid their 401(k)s borrow an average of 11% of its assets. For plan participants in their 20s, the number is much higher, coming in at 26% of savings.

Those numbers are hardly reassuring, however, when you consider that older 401(k) borrowers, even if they tap their accounts for less, may also have a shorter period before retirement in which to replenish the funds.

The Rules of a 401(k) Retirement Plan 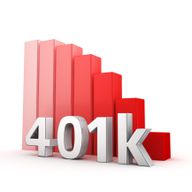 What Are the Roth 401(k) Withdrawal Rules?

Your Guide to 401(k) and IRA Rollovers
Partner Links
Related Terms
What Is a 401(k) and How Does It Work?
A 401(k) plan is a tax-advantaged retirement account offered by many employers. There are two basic types—traditional and Roth. Here's how they work.
more
The Rule of 55
The rule of 55 allows certain workers to withdraw money early from employer-sponsored retirement accounts without triggering a tax penalty.
more
What Is a Roth 401(k)?
A Roth 401(k) is an employer-sponsored retirement savings account that is funded with post-tax money. Withdrawals in retirement are tax-free.
more
Independent 401(k) Definition
An Independent 401(k) is a tax-advantaged retirement savings plan available to individual small business owners and their spouses.
more
What Is Retirement Planning? Steps, Stages, and What to Consider
Retirement planning helps determine retirement income goals, risk tolerance, and the actions and decisions necessary to achieve those goals.
more
457 Plan
A 457 plan is a tax-advantaged retirement savings account available to many employees of governments and nonprofit organizations.
more