The Asiana Visa Signature, which carries a $99 annual fee, provides three miles per dollar spent for Asiana Airlines spending, along with two miles per dollar at grocery stores and gas stations. Additionally, there is a one-time bonus of 30,000 miles (worth an estimated $660 according to our valuation), two annual bonuses, and two lounge invitations every year. 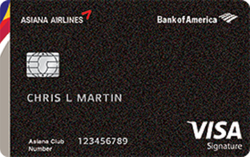 Next Steps
On Bank of America's Secured Site.
Current Offer

The Asiana Visa Signature® card is no longer available. You can review our list of the best airline credit cards for alternatives.

This mileage boost is worth $216, according to our valuations, and there’s a welcome perk of two annual passes to any of Asiana’s airport lounges. While there are more than 80 locations for these, just five are in U.S. airports—specifically, at JFK in New York, LAX in Los Angeles, SFO in San Francisco, Daniel T. Inouye in Honolulu, and Sea-Tac in Seattle. This perk will obviously have lower value if you seldom or never fly from one of those American airports.

The Asiana Visa Signature is targeted toward existing or new customers of Asiana, South Korea’s number two airline by flights and passenger volume. However, unlike most co-branded airline cards, this one could deliver significant value and make financial sense even for those who only plan to fly Asiana occasionally—as little as once or twice a year, potentially. That’s mostly because of the card’s twin annual bonuses.

The first, the $100 credit against the cost of the year’s first Asiana ticket, would alone justify paying the entire fee. Then the annual 10,000-mile anniversary bonus would provide up to $180 more in value to use for further Asiana tickets. On top of those bonuses, the card provides 3-points-per dollar rewards on Asiana purchases that, at our estimated valuation of 2.16 cents per dollar, represent more than 6 cents per dollar in reward value when used for Asiana flights.

The bonus for this card is 30,000 miles, awarded after spending $3,000 in the first 90 days of card membership. That is a sufficient number of miles to potentially redeem for a one-way economy-class ticket from Korea to Japan or to China/Northeast Asia. Redemptions for shorter-haul domestic flights within South Korea start at 10,000 miles.

The Asiana Visa Signature offers rewards on a tiered basis:

In addition to earning miles on purchases made with the Asiana Visa Signature card, there are also annual bonuses of 10,000 miles, awarded on your card anniversary, and a $100 statement credit, applied to your account after you make your first Asiana ticket purchase of the year that’s $100 or more.

Miles can be redeemed for Asiana flights, upgrades, and lounge access. It’s also possible to use rewards to book travel on other airlines who, like Asiana, are members of the Star Alliance. Mileage awards start at 10,000 miles for trips between South Korean cities. It’s also possible to upgrade, with an economy-to-business upgrade starting at 20,000 miles, depending on the destination. Additional services, like using miles to offset baggage fees, also start at 20,000 miles.

While value varies somewhat by flight and ticket type, Asiana Airlines miles have an average value of 2.16 cents each when used to redeem for Asiana Airlines flight, according to Investopedia’s valuation.

While you can’t transfer Asiana Miles to other Star Alliance partner frequent flyer programs you can use Asiana miles to book travel on alliance partner airlines through Asiana’s site. The alliance comprises 26 airlines in all, including United, Air India, Air Canada, Lufthansa, Swiss, South African Airways, Air China, and Air New Zealand. However, the awards mileage tables—and thus the value of your Asiana miles—might be different with a partner than when redeeming flights with Asiana. For example, awards flights with Star Alliance partners start at 40,000 miles rather than 10,000 miles.

You’ll get the most back from the Asiana Visa Signature, clearly, when you use it to purchase flights and related in-service items with Asiana Airlines, and then use the resulting rewards to do the same. The 3 miles per dollar spent you earn, at an average mileage value of 2.16 cents when redeemed for flights, represents just under a 6.5% effective rewards return on Asiana spending, a rate that’s hard to beat on any card.

But the card’s 2 rewards miles per dollar spent at grocery stores and gas stations are also more than respectable, delivering more than 4% in value, which matches the return of many of the best cards for spending in those categories. Even the single mile per dollar spent on everything else on the card matches the effective earnings rate of many cash back credit cards, albeit provided you use the rewards to redeem for Asiana flights, rather than less-valuable redemption options.

To show you how your rewards can add up, let’s look at what the average household might earn in rewards by charging to the card purchases in many top spending categories. Here’s what that household spending totals on average, according to the Bureau of Labor Statistics, and what the card’s rewards might be worth when used to buy Asiana flights:

Spending these amounts in these categories would result in a total spending of $15,902 per year and a substantial $486 or so in value when applied to Asiana flights. And that figure doesn’t include other purchases outside these categories for which you might use the card, nor the dual annual bonuses that could add more than $200 in additional net earnings, after the $99 annual fee is deducted from their combined value.

Nor does this total include the one-time offer of 30,000 miles, worth an additional $648. That’s a lucrative enough bonus that you should try hard to spend the required $3,000 within your initial 90 days after opening an account in order to earn it. That’s the case even if that won’t be the norm for your spending going forward, as the bonus is definitely worth the initial effort.

Bank of America earned a score of 798 out of 1,000 in J.D. Power's 2019 Credit Card Satisfaction Survey, putting it just below the national average rating of 806. This places Bank of America in seventh place in the rankings among the major credit card issuers.

Like most banks, this issuer has a mobile app for iOS and Android, which can be used to access credit card information. Bank of America’s app has a user score of 4.8 stars in the Apple App Store and 4.7 stars on Google Play.

For cardholders with an eligible Bank of America checking account, it’s possible to connect the Asiana Visa Signature card to the account and use it as overdraft protection. This can be useful in some cases.

Additionally, the card features chip technology, which is supposed to be more secure, along with fraud monitoring. There is also a $0 Liability Guarantee associated with fraudulent transactions.

The Asiana Visa Signature is a natural companion for virtually any U.S. customer of this major Korean airline, whose route maps are heavily focused in Asia. The card does have a $99 annual fee, and without the first-year waiver of many other competitors. But its twin annual bonuses should serve to justify that annual cost, and possibly more.

That fact, along with strong rewards, makes the Asiana Visa Signature a worthwhile card to consider, even for occasional Asiana flyers. However, if earning rewards primarily to acquire more flights on this airline doesn’t appeal to you, this card might not be the best choice. You might instead prefer to earn travel rewards with the Chase Sapphire Preferred. With its $95 annual fee, rewards from this general travel card can be redeemed, and at decent rates, in more ways than with a co-branded airline card such as the Asiana Visa Signature.

For even greater flexibility, you could opt for a card like the Amex Blue Cash Preferred, which has a similar annual fee to the Asiana Visa Signature, and offers whopping 6% cash back on groceries (at U.S. supermarkets up to $6,000 in annual spending) and streaming subscriptions, as well as 3% on transit (including rideshare) and gas at U.S. gas stations. The card also features an introductory APR offer on purchases and balance transfers, which the Asiana Visa Signature lacks.

Next Steps
For Asiana Visa Signature®
on Bank of America's Secured Site.
Compare This Card
See how this card compares to similar cards
CURRENT CARD
Asiana Visa Signature®
overall rating
3.6
Next Steps
Recommended Credit
Score Our recommended ranges are based off of the FICO® Score 8 credit-scoring model. Credit score is one of the many factors lenders review in considering your application.
350 579
580 669
670 739
740 799
800 850
Good - Excellent
Investopedia Credit Card Rating Methodology
Investopedia is committed to delivering the best credit card recommendations in the industry. We’ll tell you when a card is good, we’ll tell you when a card is bad, and we’ll only call a card the best if we would recommend it to our friends or family members.
Overall Star Rating Explained
To rate credit cards we objectively assess, score and weight nearly 100 individual card features which roll up into five major feature sets: fees, interest, rewards, benefits and security/customer service. Here’s how we weighted those feature sets for the overall star rating of a card:
We have applied our proprietary rating methodology to every generally-accepted credit card in the U.S. domestic market to allow consumers to make fully informed choices. It’s important to note that for our overall score that we make a number of assumptions about how you would be using your credit card: