What Is Mutual Fund NAV?

Mutual fund net asset value (NAV) represents a fund's per share market value. It is the price at which investors buy (bid price) fund shares from a fund company and sell them (redemption price) to a fund company.

A fund's NAV is calculated by dividing the total value of all the cash and securities in a fund's portfolio, less any liabilities, by the number of shares outstanding.

A NAV computation is undertaken once at the end of each trading day based on the closing market prices of the portfolio's securities. The formula for a mutual fund's NAV calculation is straightforward:

For example, let's say a mutual fund has $45 million invested in securities and $5 million in cash for total assets of $50 million. The fund has liabilities of $10 million. As a result, the fund would have a total value of $40 million.

Building on our previous example, if the fund had 4 million shares outstanding, the price-per-share value would be $40 million divided by 4 million, which equals a NAV of $10 per share.

To compute a fund's daily NAV, the values of assets and liabilities are computed at the end of each trading day.

The NAV pricing system for the trading of shares of mutual funds differs significantly from that of common stocks or equities, which are issued by companies and listed on a stock exchange.

A company issues a finite number of equity shares through an initial public offering (IPO), and possibly subsequent additional offerings, which are then traded on exchanges such as the New York Stock Exchange (NYSE). The prices of stocks are set by market forces or the supply and demand for the shares. The value or pricing system for stocks is based solely on market demand.

On the other hand, a mutual fund's value is determined by how much is invested in the fund as well as the costs to run it, and its outstanding shares. However, the NAV doesn't provide a performance metric for the fund. Because mutual funds distribute virtually all their income and realized capital gains to fund shareholders, a mutual fund's NAV is relatively unimportant in gauging a fund's performance. Instead, a mutual fund is best judged by its total return, which includes how well the underlying securities have performed as well as any dividends paid.

The NAV is simply the price per share of the mutual fund. It will not change throughout the day like a stock price; it updates at the end of each trading day. So, a listed NAV price is actually the price as of yesterday's close. But an order you put in will be based on the updated NAV at the end of the current trading day. As a result, you may not know the exact NAV when you buy or sell shares.

For example, if you want to buy $10,000 worth of mutual fund ABCDX, and the NAV as of yesterday's close was $100, that would mean you purchase 100 shares. However, if the NAV increases drastically on the day you made your purchase, you may end up with fewer than 100 shares.

What Does NAV Mean in Finance?

NAV stands for net asset value. In finance, it is used to evaluate the value of a firm or an investment fund by subtracting its liabilities from assets.

Where Do You Find the Net Asset Value per Share of a Mutual Fund?

The net asset value per share (NAVPS) of a fund is often reported along with its price quote with a broker or online financial portal. This value will often be close to, but slightly different from, the fund's actual market price since NAVPS is calculated once per day, while the assets held by a fund may change in price throughout the day.

What Causes a Change in the Net Asset Value of a Mutual Fund?

When the holdings in a fund's portfolio change, the value of the assets of the fund will also change, leading to a change in NAV. Additionally, NAV can change if the fund's liabilities change.

Is a High NAV Good or Bad?

A high NAV indicates nothing on its own, except that the fund holds a large value of assets. What is important is to compare things on a relative basis, such as the NAV of one growth fund to another. It is also important to compare a fund's NAV to its market price. If the NAV is much higher than the current market price, it may signal a good buying opportunity.

Book value is used to evaluate the intrinsic value of a particular company, by subtracting the firm's liabilities from its assets found on its balance sheet. This is a similar calculation to a fund's NAV, but a fund's assets are themselves shares of companies (in many instances).

How Do Mutual Funds Split?

Can You Place a Stop-Loss Order on a Mutual Fund?

How to Calculate the Value of an ETF 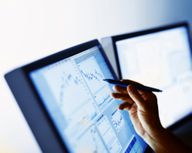