If you owned stock before the time of the internet and online brokerages, there's a very good chance that you had a stock certificate to prove it. When a company sold shares of its stock, it gave shareholders a physical piece of paper—the stock certificate. But these certificates have become a thing of the past, as the electronic trail has replaced the exchange of paper certificates.

However, if you're among those who need to have physical proof of your investment, then read on to find out how you can get your hands on a stock certificate.

Gone With the Winds of Change

For at least 400 years, when you purchased shares in a publicly traded company, you received a piece of paper to certify your ownership percentage. Stock certificates were the only way you could prove that you owned shares in a company.

But the World Wide Web and electronic trading changed all that. The web brought the internet into people’s homes for the first time in 1991, but it wasn't until the late 1990s that investing began to change in response to the internet.

Stock Certificates Are No Longer Necessary

Over time, one American company after another stopped issuing stock certificates. Although this change may not seem very newsworthy, it occasionally did hit the news, as in 2013 when Disney retired its frame-ready certificates featuring The Walt Disney Company's (DIS) most notable cartoon characters.

Today, most of the world's exchanges have either done away with or are phasing out paper certificates. Stock ownership is much easier to prove now thanks to electronic records and electronic communication networks (ECN).

But What If You Want One?

However, you still can get a share certificate by asking for one. The most obvious way to get your certificate is to go directly to the company that issued the stock, the issuer, and ask to have a physical certificate mailed to you. But going through the company can be an expensive and time-consuming process.

The easiest way to get a stock certificate is via a broker, but be prepared to pay for it.

The simplest way to get a stock certificate today is to ask your broker. If you bought your shares through a brokerage firm, it will have an account with your name and the number of shares you purchased.

Some key details on the certificate itself include your name, the company's name, the number of shares you own, as well as the CUSIP number—a unique identifier used for all stocks and bonds in the United States. Your certificate will also be signed by an officer of the company.

Be aware, though, that this request usually comes with a fee. Some brokers can charge as much as $500 for producing a piece of paper that certifies ownership of a number of shares.

What to Do If You Find a Paper Certificate?

If you have an old stock certificate it's possible, though unlikely, that it has some value beyond wall art.

First, check to see if the issuer is still in business. If it is, look for the state in which the company was incorporated along with the CUSIP number on the certificate.

Then contact the office of the secretary of state in that state to find out if the company still does business there.

If so, you can call the company directly to get the transfer agent's contact information.

In order to cash in the stock, you need to fill out the transfer form on the back of the certificate and have it notarized. Once complete, send the notarized certificate to the transfer agent, who will register the stock to you as owner.

At that point, you can sell the stock through the transfer agent or via a stockbroker.

Stock certificates were often plain, straightforward documents. In their heyday, however, companies competed to create the most visually impressive certificates. The best are appealing examples of the printer's art.

Some stock certificates are now collectors' items. Based on eBay (EBAY) listings, most old certificates are worth only a few dollars, but some very rare and unusual examples have considerable value.

Recently, for example, the starting bid for an 1867 Union Pacific Railroad Land Stock Certificate via Credit Foncier of America (pictured below) was just under $70,000.

The End of an Era

The demise of the stock certificate ends a centuries-old tradition. One of the oldest known examples of a stock certificate, found in Holland, was issued in 1606. It was around that time that the Dutch East India Company became the first company to issue stock.

The certificate is housed at the Westfries Museum in the city of Hoorn in The Netherlands.

Is It Worth It to Cash in Old Stock Certificates?

After a Stock Split, What Happens to Certificates?

How to Buy and Sell Stocks for Your Account 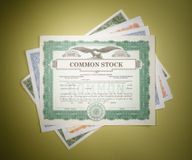 I Lost My Share Certificate. Do I Still Own the Stock?

Great Financial Gifts for Kids for the Holidays
Partner Links
Related Terms
Medallion Signature Guarantee: What It Is and Where to Get One
A medallion signature guarantee is a special certification stamp that guarantees a signature that authorizes an authentic transfer of securities.
more
Share Certificate: Definition, How They Work, and Key Information
A share certificate is a written document verifying a stockholder owns shares of a company; this paper stock certificate has largely been phased out in the digital age.
more
Retirement of Securities
Retirement of securities is the cancellation of stocks or bonds because the issuer has bought them back or their maturity date has been reached.
more
Stock Certificate
A stock certificate proves the holder has ownership in the company, as it displays the number of shares owned, the date of purchase, a corporate seal, and other details.
more
Scripophily
Scripophily is the hobby of collecting antique stock certificates and other historical financial instruments.
more
Non-Fungible Token (NFT): What It Means and How It Works
NFTs are cryptographic tokens that cannot be replicated. They can be used for transactions, have created new markets, and may have more use cases in the future.
more