Your individual retirement account (IRA) savings can be garnished to satisfy child-support payments in most states. Though some states protect IRAs from garnishment of any kind, a majority lift this exemption in cases for which the account owner owes child support.

Unlike 401(k) plans or other qualified retirement savings accounts covered under the Employee Retirement Income Security Act of 1974 (ERISA), IRA accounts are not automatically protected from garnishment by creditors.

If you are court-ordered to pay off a debt, including the payment of overdue child support, your IRA counts as an asset that may be used to satisfy that debt in most states. Though there are some situations in which your IRA may be exempt from garnishment, failure to pay child support is generally not among them.

The degree to which IRAs are protected from garnishment is determined largely by state governments. The federal government does have its system of exemptions, but states are allowed to choose between adhering to federal regulations or creating their systems.

Most states choose to develop their systems of exemptions, meaning that the specific protections offered can vary greatly depending on your state of residence.

Under federal law, there is no protection for IRA funds, except in the case of bankruptcy. When enacted, the Bankruptcy Abuse Prevention and Consumer Protection Act (BAPCPA) of 2005 protected up to $1 million of your IRA savings if you declared bankruptcy, a limit that is adjusted every three years. As of 2021, the limit is $1,362,800.

However, states have the final say over which bankruptcy regulations apply to their residents. This means that the BAPCPA $1.3 million exemption only applies if your state of residence allows you to choose between the state-specific exemption system and the federal exemption system.

Aside from this partial bankruptcy exemption, IRAs can be garnished to pay off any federal debt, including debts to the IRS for overdue taxes.

In some states, residents do not have a choice between state and federal exemptions.

Most states offer some form of limited protection from creditors for IRAs. In the event of bankruptcy, for example, many states exempt any IRA funds deposited more than 120 days before a bankruptcy filing. In Minnesota, only IRA funds over $75,000 may be garnished to satisfy creditors. Your IRA funds may also be exempt from garnishment to the extent that they are necessary to support you and your dependents, though some states cap the maximum amount of IRA funds that can be considered necessary.

Though several possible exemptions protect your IRA from creditors, many states lift these exemptions in the case of domestic relations judgments. Garnishment to satisfy child support obligations is the most common exception to these protections. In many states—including Kentucky, Colorado, Wisconsin, and Louisiana—IRAs are offered no protection from collections related to overdue child support. Judgments relating to alimony, divorce, annulment, or legal separation are also common exceptions to state exemption laws.

Can IRA Savings Be Garnished for Child Support?

Depending on the state in which you live, your IRA can be garnished for child support. IRA funds are provided no protection for overdue child support in most states.

Kansas, Connecticut, and Illinois are among the few states that offer blanket protection for IRA retirement savings. In these states, your IRA cannot be garnished for any reason, even if you owe overdue child support.

Can My IRA Be Garnished for Other Debts?

There are no federal laws that protect IRAs from creditors, except in the case of bankruptcy and only up to $1,362,800 as of 2021. Your IRA can be garnished by the government to pay your federal debts, such as back taxes owed to the IRS. Other than federal debts, states can create their own rules about garnishing IRAs to pay debts. The rules vary widely.

Investopedia requires writers to use primary sources to support their work. These include white papers, government data, original reporting, and interviews with industry experts. We also reference original research from other reputable publishers where appropriate. You can learn more about the standards we follow in producing accurate, unbiased content in our editorial policy.
Take the Next Step to Invest
×
The offers that appear in this table are from partnerships from which Investopedia receives compensation. This compensation may impact how and where listings appear. Investopedia does not include all offers available in the marketplace.
Service
Name
Description
Part Of
Divorce Survival Guide Guide 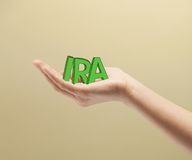 Can Creditors Garnish My IRA?

Can My IRA Be Taken in a Lawsuit?

Can My Retirement and Social Security Be Garnished?

Buying a Home: The Difference Between Cash vs. Mortgage

Can a Creditor Seize My Retirement Savings?

Homestead Exemption
A homestead exemption protects the value of a home from property taxes and creditors following the death of a homeowner spouse.
more
Levy Definition
A levy is the legal seizure of property to satisfy an outstanding debt, often a tax debt. Learn about different types of levies and how to avoid them.
more
Default
A default happens when a borrower fails to make required payments on a debt, whether of interest or principal.
more
What Is the Employee Retirement Income Security Act (ERISA)?
The Employee Retirement Income Security Act (ERISA) protects workers' retirement savings by ensuring fiduciaries do not misuse plan assets.
more
What Is a 403(b) Plan?
A 403(b) plan is a tax-advantaged retirement savings plan for teachers, nurses, and other employees of nonprofits and government agencies.
more
Deficiency Judgment
A deficiency judgment is a court ruling against a debtor who defaulted on a loan and whose secured property was insufficient to repay the full debt.
more