Note: Avianca Airlines filed for Chapter 11 bankruptcy protection in New York in May.  While the Avianca Vida Visa is still available you may wish to consider other, more flexible travel card options such as the Citi Premier or Citi Prestige card that earn ThankYou Points that can be redeemed for travel on multiple Star Alliance airlines, including Avianca.

The Avianca Vida Visa has a solid one-time offer and decent rewards on airline purchases, thanks in part to a strong points value. And despite Avianca’s current financial trouble, the miles you earn with this card will be redeemable on the airline’s many partners, in the event the carrier reduces or even ceases operations. 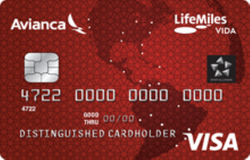 The Avianca Vida Visa is primarily designed for international travelers who frequently fly between the U.S. and Central America or Colombia. With these routes, you’ll be able to take advantage not only of the airline’s solid rewards value but also other card benefits, including an extra complimentary checked bag and award flight discounts.

That said, Avianca flies to 75 destinations in total, including countries in Europe, North America and the Caribbean, so you’re not just restricted to a certain region. Also, you can use your LifeMiles to book flights on 25 other airlines through the Star Alliance program, making your options virtually endless.

The card offers 20,000 bonus miles after you make your first purchase. While that’s not the biggest airline bonus you can get in terms of miles, it’s worth about $438, based on an average value of 2.19 cents per mile. That value is enough to effectively justify the cost of the card’s annual fee for more than seven years.

What’s more, you’ll get the bonus after making only a single purchase. In contrast, most airline credit cards require you to meet a minimum spending requirement in the first few months with the card. The only other major airline card that provides a sizable one-time offer after just one purchase is the AAdvantage Aviator Red World Elite Mastercard.

The Avianca Visa is also appealing to those who seek a low-cost card to which a high-interest balance from another card can be transferred. The card’s one-year 0% APR offer even comes with an unusually low transfer fee.

Avianca offers a handful of options for miles redemption. The most promising in terms of value is booking award flights with the airline, which will give you 2.19 cents per mile on average. However, you can also use your rewards to book award flights through Avianca’s website with one of the airline’s Star Alliance partners, where mile values can vary depending on the partner and the itinerary.

You’ll also have the choice to use miles to pay for baggage fees, upgrades and more.

In addition, you can redeem your miles with more than 200 business partners, including retailers, hotel chains, rental-car agencies, and more. Simply inform the merchant that you’d like to use miles to cover the purchase and provide your LifeMiles member number and four-digit PIN.

Redemption values can vary with these options, though, and they may not provide as much value as award flights.

Avianca LifeMiles are worth 2.19 cents apiece on average when you use them for award flights with the airline. However, that’s just an average, and your actual results could of course be higher or lower, depending on the itinerary.

Depending on the situation, you may also be able to get above-average value on flights you book with Avianca’s Star Alliance partners.

To determine how much your miles are worth for a particular redemption, take the cash price of the ticket, subtract any taxes and fees associated with an award flight, then divide the result by the number of miles required to book the flight.

The average cardholder will easily earn the one-time offer, which may be much of what you need for a one-way flight.

As an example, we found a flight from New York City to Belize for $610.45 or 28,000 miles and $87.95 in taxes and fees. That amounts to a points value of 1.87 cents per mile. That’s less than the average value based on Investopedia data, but still a solid redemption value and one that doesn’t require a lot of research.

If you have the time and the desire to maximize your Avianca LifeMiles and manage to earn one or both of the card’s 50% award flight discounts, you may be able to earn far more than the program’s average value.

For example, we found an economy flight from Los Angeles to Bogotá, Colombia, for $1,883.95 on Avianca Airlines. But if you were to use LifeMiles to book an itinerary with Copa Airlines and Avianca on the same dates, you’d only pay 70,000 miles plus $60.76 in taxes and fees.

Alone, that redemption gives you 2.6 cents per mile, which is above average in points value, albeit not by a lot. You may find greater value (though, of course, higher points tabs, too) by moving up in ticket classes. For example, we found a business-class flight from San Francisco, California, to Lima, Peru, for $2,267.69 or 68,480 miles plus $25.82 in taxes and fees for the same dates. (The only catch is that the award flight includes an economy seat between San Francisco and Los Angeles, which is a relatively short flight.)

That said, the redemption value for this option is 3.27 cents per mile, giving you exceptional value.

As this math underlines, for any particular booking, your results can be higher or lower than the average value. The same goes for flights with Star Alliance partners on average when you use them for award flights with the airline.

To calculate the value of your miles with a specific redemption, look up both the cash price of the fare and how much it’d cost to book an award ticket. Then take the cash price and subtract your taxes and fees associated with the award ticket. Finally, you’ll divide that result by the number of miles you need to book the award flight.

Being issued by a small bank, the card falls short in customer service in some obvious ways. Banco Popular de Puerto Rico doesn’t provide 24/7 access to customer service for the card, where national card issuers do. Its hours are more limited: for card issues, cardholders can reach a representative from 7 a.m to 2 a.m. EST, seven days a week, but for LifeMiles support, hours are limited to 9 a.m. to 6:30 p.m., Monday through Friday. The card also doesn’t provide complimentary access to your credit score, either, which is common with major credit card issuers.

The card offers standard security features, including an EMV chip and protection against unauthorized charges.

However, its $10 maximum for cash advance and balance transfer fees is unique, and will be valuable for someone who uses either of these options for larger transactions.

The Avianca Vida Visa can provide decent value through its rewards program. Plus, with the airline’s membership in the Star Alliance, you’ll have some flexibility with booking flights with other airlines, and to far more destinations than those in Central America and Colombia alone.

If customer experience is a big priority for you, though, it’s important to know that there isn’t a lot of information about how well the card’s issuer, Banco Popular de Puerto Rico, provides that. Also, you’ll need to have both your spending and travel plans aligned with the card’s features to ensure it’s worth its $59 annual fee.

As with any credit card, it’s important to shop around and compare the Avianca Vida Visa before you settle on the best option for you. As part of that process, consider the Avianca Vuela Visa. This sister card charges a $149 annual fee, but it offers an annual discount on an award flight, an extra complimentary checked bag on select flights, and strong rewards on gas and groceries. It also has all the pluses of this card, including the 0% APR offer.

Apply Now
For Avianca Vida Visa® Card
on Banco Popular's Secured Site.
Compare This Card
See how this card compares to similar cards
CURRENT CARD
Avianca Vida Visa® Card
overall rating
3.0
Apply Now
Recommended Credit Score Our recommended ranges are based off of the FICO® Score 8 credit-scoring model. Credit score is one of the many factors lenders review in considering your application.
350 579
580 669
670 739
740 799
800 850
Good - Excellent
Investopedia Credit Card Rating Methodology
Investopedia is committed to delivering the best credit card recommendations in the industry. We’ll tell you when a card is good, we’ll tell you when a card is bad, and we’ll only call a card the best if we would recommend it to our friends or family members.
Overall Star Rating Explained
To rate credit cards we objectively assess, score and weight nearly 100 individual card features which roll up into five major feature sets: fees, interest, rewards, benefits and security/customer service. Here’s how we weighted those feature sets for the overall star rating of a card:
We have applied our proprietary rating methodology to every generally-accepted credit card in the U.S. domestic market to allow consumers to make fully informed choices. It’s important to note that for our overall score that we make a number of assumptions about how you would be using your credit card: