The Best Western Rewards Premium Mastercard offers 80,000 bonus points after spending $3,000 in the first three billing cycles and the opportunity to earn an anniversary bonus of 40,000 points. Cardholders earn 10 points per dollar spent on Best Western stays. There's no special intro fee for the first year, but an annual fee of $89. 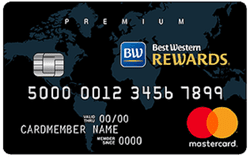 This card could be a good fit for people who frequently stay at Best Western hotels. If you can earn the bonus of 80,000 points and the 40,000 annual anniversary bonus points, those can more than justify the costs of this card over the long run. This card can offer outsized value if you redeem your rewards at Best Western hotels that provide the highest value per point.

While the points aren't as valuable as those on some other credit cards, the high bonus amounts and 10 points per dollar spent on Best Western stays make up for the lower points value. After you spend at least $5,000 on this card to earn the anniversary bonus, using a cash-back card that pays more than 1% for your non-Best Western purchases could earn you larger rewards.

This card offers 80,000 bonus points after you spend $3,000 in the first three complete, consecutive billing cycles after your account is opened. To earn the bonus, your account must be open and enrolled in the rewards program. The bonus points should arrive in your account six to eight weeks after they’re earned.

Best Western purchases qualify only if made at BestWestern.com, by calling Best Western directly, or by booking through a Best Western branded hotel. You’ll also earn 2 points per dollar on all other purchases.

Earning 10 points per dollar on Best Western stays is still a great value even after you consider the relatively low value per point you get when redeeming your rewards. However, the 2 points per dollar all other purchases can typically be outearned with a 2% cash-back credit card.

Considering that you can also transfer your Best Western points to airline programs, you will have greater flexibility if you take the Best Western points and transfer them later. The only drawback to this would be needing to save up at least 5,000 points before you can transfer points to a partner loyalty program. That could take a while, depending on your spending patterns.

Best Western offers a number of ways to redeem your points. To get the most value for your points, you're likely best off booking stays at Best Western hotels. An award night starts at 8,000 points and can cost up to 36,000 points.

If you don't want to use your points for an award night at a Best Western hotel, you can redeem them for special promotions, Best Western Travel cards, gift cards, merchandise, or charitable donations. Or, you can transfer your points to select airline loyalty programs. The value you’ll receive per point for these redemption options is almost always less than redeeming for awardstays at Best Western hotels.

Maximizing the rewards on this card takes some planning. As far as earning points goes, you’ll want to make sure you collect the bonus of 80,000 points by spending $3,000 within the first three billing cycles after you open the account. You should also take advantage of the 40,000 anniversary bonus points for spending at least $5,000 during each 12-billing-cycle period.

You'll want to charge all of your Best Western purchases to this card and collect those 10 points per dollar spent. But after you've satisfied the annual $5,000 annual spending requirement for the additional bonus points, you'll likely come out ahead if you use a 2% cash-back credit card for your non-Best Western purchases.

When you're ready to redeem your Best Western points, booking award nights at Best Western hotels usually offers the best value. The value per point will vary according to the hotel you pick, so look for hotels that offer the best point valuations.

For example, you could use 48,000 of the points from your bonus to book a two-night stay at the Lincoln Hotel SureStay Collection by Best Western in Monterey Park, Calif (for a stay beginning on November 11, 2019). The same stay would cost $274.29 if you booked at Best Western's flexible rate. This reward redemption would result in a value of roughly 0.6 cents per point.

Or, if you wanted to get more value out of your points, you could book a four-night stay (begining November 11, 2019) at the Best Western Plus Dallas Hotel & Conference Center in Dallas for those 48,000 points. You’d otherwise pay $443.62 with Best Western’s flexible rate. Using your points for this hotel stay would result in a value per point of about 0.9 cents.

The Best Western Rewards Mastercard is issued by First Bankcard, a division of First National Bank of Omaha, which was not rated in J.D. Power's 2019 U.S. Credit Card Satisfaction Study.

You can contact First Bankcard 24/7 by calling the number on the back of your card or 888-295-5540. The card issuer also offers mobile and online account access.

This card's security features are standard for the industry.

You will have to pay $89 each year of card membership. The card’s balance transfer fee ($10 or 5% of the amount of each transfer, whichever is greater) and cash advance fees ($15 or 5% of the amount of each cash advance, whichever is greater) are higher than many competing cards. On a positive note, this card doesn’t charge foreign transaction fees or a penalty APR.

The Best Western Rewards Premium Mastercard offers a decent value for people who often stay at Best Western hotels. As long as you can earn the bonus of 80,000 points for spending $3,000 in the first three billing cycles and the 40,000 point anniversary bonus for spending at least $5,000 each year, the rewards this card offers should more than justify the cost of the annual fee. And while Best Western points aren't as valuable as some other credit card rewards, the opportunity to earn an additional 10 points per dollar spent on Best Western stays helps make up for that.

Even so, after you spend at least $5,000 on the card to collect the anniversary bonus each year, consider putting your non-Best Western purchases on other credit cards to earn more value from your spending.

Apply Now
For Best Western Rewards® Premium Mastercard®
on FNBO's Secured Site.
Compare This Card
See how this card compares to similar cards
CURRENT CARD
Best Western Rewards® Premium Mastercard®
overall rating
3.6
Apply Now
Recommended Credit Score Our recommended ranges are based off of the FICO® Score 8 credit-scoring model. Credit score is one of the many factors lenders review in considering your application.
350 579
580 669
670 739
740 799
800 850
Good - Excellent
Investopedia Credit Card Rating Methodology
Investopedia is committed to delivering the best credit card recommendations in the industry. We’ll tell you when a card is good, we’ll tell you when a card is bad, and we’ll only call a card the best if we would recommend it to our friends or family members.
Overall Star Rating Explained
To rate credit cards we objectively assess, score and weight nearly 100 individual card features which roll up into five major feature sets: fees, interest, rewards, benefits and security/customer service. Here’s how we weighted those feature sets for the overall star rating of a card:
We have applied our proprietary rating methodology to every generally-accepted credit card in the U.S. domestic market to allow consumers to make fully informed choices. It’s important to note that for our overall score that we make a number of assumptions about how you would be using your credit card: