If you regularly shop at Walmart, the no-annual-fee Capital One Walmart Rewards Mastercard is aimed at you, beginning with its unlimited rewards of 2 points per dollar spent on Walmart-related purchases, restaurants, and travel. Unlike some other retail credit cards, there’s no upfront cash or points reward. There is, however, a special rate of 5 points per dollar spent on Walmart purchases in the first year, provided you use the card with the Walmart Pay app. 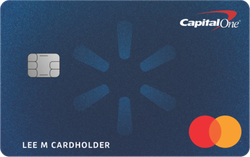 Earn 5% back in Walmart stores for the first 12 months when you use your Capital One Walmart Rewards Card with Walmart Pay - the quick and secure way to pay with your phone at Walmart.

While the Capital One Walmart Rewards is widely accepted, it's designed for people who regularly shop at Walmart, whether virtually or physically. It offers far higher rewards for purchases at the giant retailer than for those elsewhere, which earn an unremarkable 1 point per dollar spent.

The card also favors those digitally inclined consumers, given its ongoing rate of 5 points per dollar spent for website and app purchases, along with an introductory offer of that same rate for a year, provided you use Walmart Pay, the store’s mobile payment platform.

Finally, this card is a respectable choice for travel, beginning with its 2% rewards on travel and dining purchases. It also doesn’t charge a foreign transaction fee, and its Mastercard affiliation gives it wide acceptance globally.

The card doesn't offer a traditional bonus, such as a cash-back offer or a discount on your first purchase. There is, however, a 12-month promotional period (after you sign up) in which you earn 5 points per dollar spent—a bonus of 2 points over the regular rate—on all in-store Walmart purchases made with your card. To qualify, however, you must be willing to download Walmart Pay and use the Capital One Walmart Rewards card through that mobile app.

This card doesn’t allow you to receive rewards as cash in a bank account. Rather, Capital One allows you to redeem your points as ongoing statement credits, gift cards, or directly for a travel purchase. You can also receive a statement credit for a specific purchase, provided you request that within 90 days of the transaction posting. In all cases, points are redeemed at 1 cent apiece.

You can redeem your points online, through the mobile app, or by calling Capital One, depending on your redemption choice.

The make the most on this card, you should of course use it every time you shop at Walmart. And when you do, consider making purchases online or via an app to potentially boost your earnings.

To maximize the value of the introductory promotion, which requires using Walmart Pay to earn 5-points-per-dollar rewards, download the payment app to your smartphone as soon as receiving the card.

Also, consider if you might shift some of your Walmart purchases from in-store to online or the Walmart app to earn an additional 3 points per dollar spent. Doing that needn’t necessarily involve waiting or paying for shipping. For example, a wide range of goods can be ordered online or through the Walmart app and picked up on the same day at a local Walmart store.

To illustrate how much these techniques can boost your rewards, let’s assume you’re the typical Walmart shopper—who spent $55 per visit to the store in 2015, according to Perfect Price—and you shop at the store every week. That yields annual spending at the store of about $2,860. That would earn you points worth $53 if you used the Capital One Walmart Rewards in-store. Yet you’d more than double those earnings, to a total of $143, by either using the card in the first year via Walmart Pay or online—say, to order at Walmart.com and then pick up your order in a nearby store.

Capital One was rated third in J.D. Power’s 2019 Credit Card Customer Satisfaction Study, behind only Discover and American Express.

The bank provides free access to your VantageScore credit score through its CreditWise program, but you don’t need a Capital One card to register for the free score. The VantageScore isn't widely used among major lenders, though, and many credit card issuers offer free access to your FICO score, which lenders use more frequently in credit decisions.

Capital One provides 24/7 customer service, which is standard among credit card issuers. You can reach the customer service team at 800-227-4825 or at the number on the back of your card.

For account management, use the card issuer's website or mobile app, which was ranked No. 2 among national card issuers by J.D. Power in its 2019 U.S. Banking Mobile App Satisfaction Study.

Capital One offers two valuable security features that aren't standard among major card issuers. The first is the ability to lock your card from the mobile app, which can come in handy if you misplace it. You can also unlock the card once you find it.

Second, the bank allows you to create virtual credit card numbers when you’re shopping online. You can create a different number for each online retailer, even during the checkout process, and you can lock and unlock your virtual card numbers at any time.

Can You Use the Walmart Credit Card Anywhere?

The Capital One Walmart Mastercard can be used globally with all merchants that accept Mastercard for payments. Walmart also offers a private label store-only credit card that can only be used at Walmart stores or online at Walmart.com, however. This store-only card does not carry the Mastercard emblem and features different terms and conditions in relation to its rewards and interest rate structure.

This Walmart credit card appears clearly aimed at competing with Target's Red card, which offers a universal and unlimited 5% discount on Target purchases. Yet the Capital One Walmart Rewards offers the equivalent rewards on in-store purchases only for the first year of the account, and only if you’re prepared to use Walmart Pay, the retailer’s payment app. The card's rewards also accumulate as points. All in all, the card has a far more complex rewards arrangement than Target’s instant 5% discount at the register.

But while the Capital One Walmart Rewards likely won't get many Target shoppers to switch allegiances, it offers enough to be worthwhile for Walmart regulars. If you're already a loyal Walmart shopper, you can earn rewards—excellent in the first year, decent after that—without changing much at all about how you shop.

That said, while the Capital One Walmart Rewards also functions as a full-service Mastercard, the card doesn't offer a lot beyond its bonus rewards on Walmart-related spending. So if you’re looking for a card with more features or you just want better rewards rates on broader categories, this one might not be for you.

It might, though, be a useful companion to another credit card that has a relatively high rewards rate on all your non-Walmart spending. You could, as examples, also acquire the Citi Double Cash card, which offers 1% back on all purchases and another 1% when you pay your bill, or the Chase Freedom Unlimited, which will give you 1.5% back on everything. One of those cards plus the Capital One Walmart Rewards would allow you to take advantage of the Capital One Walmart Rewards card's rates when using that card for Walmart purchases, especially in the first year of ownership. And then also getting to enjoy better rewards on all other spending than a mere point per dollar spent—which is the bare minimum in rewards for the credit card marketplace these days.

Apply Now
For Capital One Walmart Rewards Mastercard
on Capital One's Secured Site.
Compare This Card
See how this card compares to similar cards
CURRENT CARD
Capital One Walmart Rewards Mastercard
overall rating
3.5
Apply Now
Recommended Credit Score Our recommended ranges are based off of the FICO® Score 8 credit-scoring model. Credit score is one of the many factors lenders review in considering your application.
350 579
580 669
670 739
740 799
800 850
Good - Excellent
Investopedia Credit Card Rating Methodology
Investopedia is committed to delivering the best credit card recommendations in the industry. We’ll tell you when a card is good, we’ll tell you when a card is bad, and we’ll only call a card the best if we would recommend it to our friends or family members.
Overall Star Rating Explained
To rate credit cards we objectively assess, score and weight nearly 100 individual card features which roll up into five major feature sets: fees, interest, rewards, benefits and security/customer service. Here’s how we weighted those feature sets for the overall star rating of a card:
We have applied our proprietary rating methodology to every generally-accepted credit card in the U.S. domestic market to allow consumers to make fully informed choices. It’s important to note that for our overall score that we make a number of assumptions about how you would be using your credit card: