Chase has announced a plan to expand its partnership with grocery delivery service Instacart through a new credit card. The new card will offer accelerated rewards when making cardholders order groceries through the service, but neither company has provided any details beyond that. The new card is expected to be launched this year.

Chase to Launch an Instacart Credit Card, Provides No Specifics

Instacart tripled its revenue in 2020 as a result of the coronavirus pandemic, and although that growth plateaued in 2021, the company has gotten significant attention from investors and partners.

Chase was one of those partners, beginning its relationship with Instacart in 2020. The bank then announced plans in early 2021 to launch an Instacart credit card. Later in the year, the bank added Instacart membership as a benefit to many of its credit cards.

Now, Chase has announced that the new card will come on the market later in 2022. Unfortunately, there are no details about the card, other than the fact that cardholders will earn bonus rewards on purchases made through the grocery delivery app.

Instacart partners with more than 700 national, regional and local supermarkets and retailers, making the card an option for many consumers across the U.S.

The card will be a World Elite Mastercard credit card and will come with benefits offered by Mastercard on that tier, including perks with Lyft, DoorDash, ShopRunner and more.

How the Macy's Credit Card Works: Benefits and Rewards 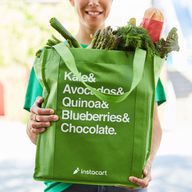 Chase Freedom Cards Get a 5% Intro Bonus on Groceries
Partner Links
Related Terms
Co-Branded Credit Card: Definition, How It Works, Examples
A co-branded credit card is sponsored by two parties: typically, a retailer and a bank or card network (Visa, MasterCard). It bears the logo of both.
more
Affinity Card
Offered through banks, affinity cards tied to nonprofit and charitable organizations can create a passive stream of donations.
more
What Is a Visa Card? Definition, Uses, Statistics, and Types
A Visa card is any type of payment card that uses the Visa network and is branded by Visa Inc.
more
Mastercard: Definition and Ranking in Global Payments Industry
A Mastercard is any electronic payment card that uses the Mastercard network for processing transaction communications.
more
Open Loop Card
Any charge card that is widely accepted at a variety of merchants and locations is considered an open loop card.
more
What Is TSA PreCheck? What It Does, Benefits, and How to Qualify
The TSA PreCheck program allows travelers deemed low risk by the Transportation Security Administration to quickly move through security screening.
more