Chase has announced a new benefit for new Chase Freedom Flex and Chase Freedom Unlimited cardholders. New account holders will now earn 5% cash back on gas station purchases, up to the first $6,000 spent in their first 12 months with the card.

How to Make the Most of the New Freedom Gas Bonus

Gas prices have soared since the beginning of the pandemic, as oil prices rebounded after entering negative territory for the first time. In December 2021, the average price per gallon in the U.S. was $3.406, compared to $2.284 the previous year.As a result, the new bonus offered by the Chase Freedom cards could be a major incentive for some consumers.

To maximize the bonus, however, you'll need to make sure you're using your new Freedom card at eligible gas stations. According to Chase, merchants that don't specialize in selling gasoline for cars, such as truck stops, boat marinas, oil and propane distributors, and home heating companies, are ineligible.

Since you'll have 12 months to make the most of the bonus rewards rate, that breaks down to spending $500 per month. Depending on your driving habits, you may not be able to reach that with gas purchases alone. But bear in mind that it's based on the merchant, not what you purchase. This means that you'll earn the bonus rewards rate not only when you buy gas at the pump, but also when you make purchases inside the gas station.

Finally, note that this bonus rewards rate is in addition to the regular sign-up bonus you can get with either card, which is $200 after you spend $500 in the first three months. 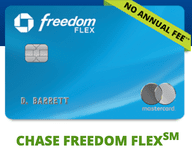 Activate Your Chase Freedom and Freedom Flex Q4 5% Cash Back Categories
Partner Links
Related Terms
How Does Cash Back Work?
Cash back refers to a credit card that refunds a small percentage of money spent on purchases. You can also sign up through cash-back sites and apps.
more
Merchant Category Codes (MCC)
Merchant category codes (MCC) are used by credit card companies to categorize purchases.
more
All You Need to Know About Discover Card
A Discover card is a credit card brand that is issued by the American financial services company, Discover Financial (DFS).
more
What Is Behavior-Based Repricing?
Behavior-based repricing is an increase or decrease in a credit card customer's interest rate based on the customer's repayment activity.
more
What Is a BitPay Card?
BitPay is a cryptocurrency debit card that allows you to use your Bitcoin to make payments.
more
Gift Cards
A gift card is a type of prepaid debit card loaded with funds for future use. Open loop cards can be used at many merchants, closed loop at just one.
more