With its $450 annual fee, the Citi AAdvantage Executive World Elite Mastercard is by far the priciest of the cards aimed at American Airlines fliers. The card comes with Admirals Club membership, alone worth up to $650, as well as a 50,000 bonus miles bonus for spending $5,000 with the card in the first three months of account opening, along with other American benefits. 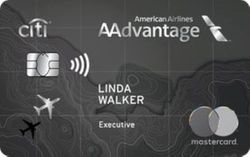 Earn 50,000 American Airlines AAdvantage® bonus miles after $5,000 in purchases within the first 3 months of account opening.

Recommended Credit
Score Our recommended ranges are based off of the FICO® Score 8 credit-scoring model. Credit score is one of the many factors lenders review in considering your application.
350 579
580 669
670 739
740 799
800 850
Excellent
how this card stacks up
When compared among all rewards cards in our database:
Rewards
Benefits
Low Fees
Security/Customer Experience
Low Interest
worst best
Read our full methodology.

The Citi AAdvantage Executive World Elite Mastercard best suits frequent American Airlines travelers who don’t already have elite status with the airline and want to enjoy some of the perks of status through this card.

For example, if you’re without status and seek access to Admirals Club lounges, the card allows you to get it without paying a membership fee that would otherwise cost $650. Big spenders can also earn 10,000 Elite Qualifying Miles for spending at least $40,000 a year with the card, a boost that would help get them closer to earning Gold AAdvantage status. Other card perks include a first checked bag free, a statement credit against the costs of Global Entry or TSA Precheck security programs ($100 and $80, respectively) every five years and priority boarding on American Airlines flights.

You earn 50,000 American Airlines AAdvantage bonus miles if you spend $5,000 in purchases within the first three months after opening an account. Based on our valuation of AAdvantages miles at an average of 2.26 cents, the bonus is worth up to $1,130.

While these rewards rates may seem modest, they’re actually fairly generous when you consider our calculated average value for AAdvantage miles of 2.26 cents. While the precise reward varies by the flight selected, that valuation promises typical earnings when buying flights of 4.52 cents per dollar spent. Provided you’re happy to redeem rewards for flights on Americans and its partners, that return makes the Citi AAdvantage Executive World Elite Mastercard competitive with cards that earn 4 cents per dollar spent, and far more rewarding than the many cards that award only a cent per dollar in most spending categories.

Miles earned will typically appear in the primary cardmember's AAdvantage account eight to 10 weeks after they're earned. To keep your miles from expiring, you have to earn or redeem miles on American Airlines or with an AAdvantage partner at least once every 18 months. While there are no blackout dates where you cannot use your miles, there may be limited reward availability.

You redeem the miles you earn through American Airlines' AAdvantage program. The program offers many options to use your miles, but booking flights generally gives you the highest value per mile. Other options include cabin upgrades, car rentals, hotel stays, vacation packages, newspapers, and charitable donations.

You can book award flights directly, online, for American and most of its partner airlines. While American Airlines does offer a reward chart that details the cost per flight, they've recently rolled out Economy Web Specials which have added flexible pricing for some of their award flights.

American Airlines is part of the oneworld alliance of airlines. That means you can use your miles to directly book award flights online with these alliance partners:

American Airlines also partners with other airlines for which you can't book online, but can do so by phone or in-person at offices or airport counters. These airlines:

The number of award flights are limited, as with the programs at other airlines. You also have to pay taxes and carrier-imposed fees for flights on these partner airlines.

The first way to make the most of the Citi AAdvantage Executive World Elite Mastercard is to ensure you earn the bonus; that requires spending at least $5,000 on the card within the first three months you own it. Then, of course, you can use the card widely, and not necessarily only for American Airlines purchases.

When it comes to booking flights, redeeming miles for longer flights in better seats can often yield the best value, especially if the destination is outside the U.S.

For example, let's say you and your spouse want to visit Disney World in Orlando, Florida from Seattle, Washington. Using the MileSAAver-bonus award category, a round trip flight for two of you would require redeeming 50,000 miles plus $22.40 in taxes and fees. If purchased instead, the flight would cost $1,278, including taxes and fees. The mileage redemption, then, yields a value of roughly 2.5 cents per mile.

Now let's compare the value you receive if you instead fly one-way from Boston, Massachusetts to London, United Kingdom in business class. If redeemed with miles, your ticket will cost 57,500 miles plus $628.70 in taxes and fees. While the taxes and fees may seem expensive, the same ticket would cost you $7,155.70 including taxes and fees. Consequently, this redemption yields a value of about 11.4 cents per mile.

The bank offers free access to your FICO credit score, which can come in handy if you’re working on building or maintaining your credit history.

If you have a question, you can reach customer service via phone 24/7, which is standard in the credit card industry. You can also chat with someone through your online account, which isn’t a feature you’ll get with some other major card issuers. You can manage your account online or through Citi’s mobile app.

The security features offered on this credit card are standard for the industry.

The biggest fee to be aware of is the steep $450 annual fee which, unlike with some other cards, is not waived in the first year. However, one positive as far as fees go is this card’s absence of a foreign transaction fee, which on some other cards can add 3% to the cost of transactions made outside the U.S.

As befits a card with a $450 annual fee, the Citi AAdvantage Executive World Elite Mastercard has fairly narrow appeal. It's a card for those with deep pockets who fly American Airlines often enough to want the perks enjoyed by the carrier’s elite fliers—but not so often that one earns them through acquiring status in the AAdvantage program. If you want unlimited access to airport lounges, for example, and are willing to pay for that privilege, this is the card for you.

If you aren't focused on such benefits, but still want to earn AAdvantage miles, other co-branded American Airlines cards allow you earn the same or better rewards as this card for less, and sometimes with comparable bonuses. The AAdvantage Aviator Red World Elite Mastercard, with a $99 annual fee, offers the same rewards rates and actually has a better one-time offer: 60,000 miles when you make your first purchase with the card. The Citi/AAdvantage Platinum Select World Elite Mastercard, also $99 a year, allows you to earn 2 miles per dollar spent with the card not only on spending from American but on gasoline and in restaurants. However, neither of these American AAdvantage cards offers complimentary Admirals Club access.

Finally, for no fee at all, the Citi AAdvantage MileUp Mastercard rewards you with 2 miles per dollar spent in grocery stores and on eligible American Airlines purchases, as well as 1 mile per dollar spent on other purchases.

Apply Now
For Citi® / AAdvantage® Executive World Elite Mastercard®
on Citi's Secured Site.
Compare This Card
See how this card compares to similar cards
CURRENT CARD
Citi® / AAdvantage® Executive World Elite Mastercard®
overall rating
3.1
Apply Now
Recommended Credit
Score Our recommended ranges are based off of the FICO® Score 8 credit-scoring model. Credit score is one of the many factors lenders review in considering your application.
350 579
580 669
670 739
740 799
800 850
Excellent
Investopedia Credit Card Rating Methodology
Investopedia is committed to delivering the best credit card recommendations in the industry. We’ll tell you when a card is good, we’ll tell you when a card is bad, and we’ll only call a card the best if we would recommend it to our friends or family members.
Overall Star Rating Explained
To rate credit cards we objectively assess, score and weight nearly 100 individual card features which roll up into five major feature sets: fees, interest, rewards, benefits and security/customer service. Here’s how we weighted those feature sets for the overall star rating of a card:
We have applied our proprietary rating methodology to every generally-accepted credit card in the U.S. domestic market to allow consumers to make fully informed choices. It’s important to note that for our overall score that we make a number of assumptions about how you would be using your credit card: