With a $99 annual fee, which is waived for the first year, the Citi/AAdvantage Platinum Select World Elite Mastercard is among the least expensive cards aimed at American Airlines customers. It offers strong rewards not only on purchases from American but on gas and restaurant spending as well. 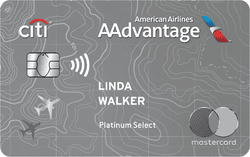 Unsurprisingly, the Citi/AAdvantage Platinum Select World Elite Mastercard best suits people who fly with American Airlines, and regularly. Its rewards are designed to heavily favor redemption for flights with American and its international partners.

Even if you settle for redemptions of a lesser value, you can still get enough value out of the card's free checked baggage and flight-discount perks to easily get the card's annual fee back in value.

For more context, you can get a roundtrip domestic flight for as little as 15,000 miles and round trip international flights start at 25,000 miles.

In addition to the card's bonus, you'll also earn 2 miles per dollar on eligible American Airline purchases and at gas stations and restaurants, and 1 mile per dollar on all other purchases.

The card's base rewards rate may sound low, but considering how much each mile is worth, it’s still worth considering the card for all of your everyday purchases.

The best way to redeem your AAdvantage miles is by booking flights with American and its partner airlines. But while we calculated a value of 2.26 cents per mile, you may get more or less than that based on how you use yours.

American Airlines allows you to use your miles for other things as well, but you’re unlikely to get much value with these other redemption alternatives:

You can't transfer AAdvantage miles to another loyalty program, but you can use your rewards to book flights with American Airlines partners through the airline’s online booking platform and via phone reservations.

Getting the most from this card begins with charging as much to it as makes sense for you, given your budget and the other cards you own. This card's average mile value of 2.26 cents, makes charging all American purchases as well as those for gas and restaurants a lucrative prospect.

Especially when its earnings are redeemed for pricier international tickets with American's partners, this card could beat all others in your wallet for rewards, unless another card offers better than about 4 cents in value for every dollar you spend. Using the card extensively can also earn you the $125 flight credit that’s awarded if you book at least $20,000 in charges to it over the course of a year.

As for redemption, little else but their use for award flights makes much financial sense, given the poor value you'll get with those other options. As you consider how to maximize them, take some time to research different redemptions to see how much value you can get out of your miles—since this ranges widely.

Now, let's consider an international flight from New York City to Abu Dhabi. If you pay out of pocket for the flight we found, you're looking at $1,045 for a seat in economy or a staggering $18,626 for a first-class fare.

Exploring various redemption options can take time and demand patience, but the result can be savings that run into thousands of dollars, especially for premium seats on long international flights.

The bank offers free access to your FICO credit score, which can come in handy if you're working on building or maintaining your credit history.

If you have a question, you can reach customer service via phone 24/7, which is standard in the credit card industry. You can also chat with someone through your online account, which isn't a feature you'll get with some other major card issuers. You can manage your account online or through Citi's mobile app.

With the Citi mobile app, you can lock your account if you misplace your card then unlock it once you've found it. While many other national credit card issuers offer this feature, it's not a given.

The Citi/AAdvantage Platinum Select World Elite Mastercard is also a contactless credit card. This means that if you're using a contactless-enabled card reader, you can just tap your card instead of swiping or inserting it. This process is faster than inserting your card into a chip reader but still gives you the same level of security. Contactless credit cards are more common than they used to be but not every major card issuer is on board.

While it's best for frequent travelers on American Airlines, the Citi/AAdvantage Platinum Select World Elite Mastercard offers ample rewards to justify its acquisition by even some occasional travelers on the airline. That's especially true for the first year in which you own the card, where its one-time offer alone provides sufficient points for several domestic return trips.

That said, the card is likely to be most valuable when used for international travel. Using miles to book with American's oneworld alliance partners tends to yield the most lucrative redemption rates, our research suggests.

American Airlines is unusual, if not unique, in offering credit cards from two different issuers. Competing with this Citi card, then, is the AAdvantage Aviator Red World Elite Mastercard, which is issued by Barclays. Each has comparative advantages and disadvantages you should weigh against your spending and card priorities.

The AAdvantage Aviator Red World Elite Mastercard has the better one-time offer: 60,000 miles when you make your first purchase with the card and pay the annual fee. But the Citi/AAdvantage Platinum Select World Elite Mastercard waives the $99 fee in the first year, and allows you to earn 2 miles per dollar spent with the card for spending from American as well as on gasoline and in restaurants. Its competitor, by contrast, only providers that rate for American purchases.

Both of these cards, though, are unsuitable for those who wish to redeem at least some of the miles they earn for anything other than flights on American—or, better still, the carrier's international partners. If you want a wider range of redemption options, while still earning plenty of value, consider a general travel credit card instead.

If you're averse to paying any annual fee because of the risk you may not recoup it, you could also consider a no annual fee card such as the Bank of America Travel Rewards card, which offers 1.5 points on all purchases.

Apply Now
For Citi® / AAdvantage® Platinum Select® World Elite™ Mastercard®
on Citi's Secured Site.
Compare This Card
See how this card compares to similar cards
CURRENT CARD
Citi® / AAdvantage® Platinum Select® World Elite™ Mastercard®
overall rating
4.0
Apply Now
Recommended Credit Score Our recommended ranges are based off of the FICO® Score 8 credit-scoring model. Credit score is one of the many factors lenders review in considering your application.
350 579
580 669
670 739
740 799
800 850
Good - Excellent
Investopedia Credit Card Rating Methodology
Investopedia is committed to delivering the best credit card recommendations in the industry. We’ll tell you when a card is good, we’ll tell you when a card is bad, and we’ll only call a card the best if we would recommend it to our friends or family members.
Overall Star Rating Explained
To rate credit cards we objectively assess, score and weight nearly 100 individual card features which roll up into five major feature sets: fees, interest, rewards, benefits and security/customer service. Here’s how we weighted those feature sets for the overall star rating of a card:
We have applied our proprietary rating methodology to every generally-accepted credit card in the U.S. domestic market to allow consumers to make fully informed choices. It’s important to note that for our overall score that we make a number of assumptions about how you would be using your credit card: