Domino's Pizza, Inc. (DPZ) shares fell around 10% on Thursday after the company reported worse-than-expected fourth quarter financial results. Revenue rose 21.1% to $1.08 billion but missed consensus estimates by $10 million, and non-GAAP earnings per share came in at $2.62 but missed consensus estimates by seven cents per share. Comparable sales were also well below the 7.2% consensus at 5.6%.

While domestic comparable sales missed expectations, Stephens Inc. analyst Will Slabaugh believes that the comparable sales still show strong momentum in the company's business. The analyst maintained his Overweight rating and believes that the pizza company can sustain domestic same-store sales growth at the high end of the company’s guidance of 3% to 6% over the next three to five years.

Popular pizza chains – including Domino's, Papa John's International, Inc. (PZZA) and Pizza Hut, under parent YUM! Brands, Inc. (YUM) – could face near-term competition as Blaze Pizza positions itself for an initial public offering. In addition to having LeBron James as an investor and occasional spokesperson, the new pizza chain is adding to-go and delivery services across the United States.

From a technical standpoint, Domino's stock broke down from trendline and 50-day moving average support levels at $261.73 to S1 support at $253.14. The relative strength index (RSI) moved toward oversold territory with a reading of 34.26, but the moving average convergence divergence (MACD) accelerated its downtrend. These indicators suggest that the stock could see some near-term consolidation, but the intermediate-term trend remains bearish.

Traders should watch for some consolidation above S1 support at $253.14 before a possible breakdown to retest reaction lows at around $235.00 in the intermediate term. If the stock remains above S1 support, traders should watch for a move back in to its prior price channel above $261.73, although strong resistance lies near the pivot point and 200-day moving average at around $270.00, which could limit upside.

Papa John's (PZZA) Could Break Out to New Highs 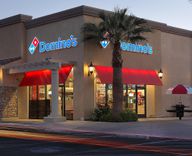 Investors Dine on Restaurant Stocks as Sales and Earnings Climb

Glu Mobile Breaks Down to Key Support After Earnings

Big Lots (BIG) Could Give Up Ground After Downgrade

What Is an Uptrend?
Uptrend is a term used to describe an overall upward trajectory in price. Many traders opt to trade during uptrends with specific trending strategies.
more
Three White Soldiers
Three white soldiers is a bullish candlestick pattern that is used to predict the reversal of a downtrend.
more
What Is Swing Trading?
Swing trading is an attempt to capture gains in an asset over a few days to several weeks. Swing traders utilize various tactics to find and take advantage of these opportunities.
more
What Is Technical Analysis?
Technical analysis is a trading discipline that seeks to identify trading opportunities by analyzing statistical data gathered from trading activity.
more
Correction
A correction is a drop of at least 10% in the price of a stock, bond, commodity, or index.
more
Meme Stock
Meme stocks describe the shares of companies that have gained a cult-like following on social media, which can influence share prices.
more