With Tesla shares down more than 60% this year, the company told workers that it has frozen hiring and to expect layoffs early next year, EV publication Elektrek reported. The report comes six months after Musk called for a "pause" on new hires and said the company should cut a tenth of its workforce.

Among the critics is longtime Tesla bull Ross Gerber, who is seeking a seat on the company's board. "Elon has now erased $600 bil of tesla wealth and still nothing from the Tesla BOD," Gerber tweeted on Dec. 16. "It’s wholly unacceptable." Four days later, he added, "Time for a shake up."

The speculation comes as Musk the Twitter owner has apparently had enough of Musk the Twitter CEO—just like many users of the site and the disgruntled Tesla shareholders who say he's spent far too much time and money on the social media network. Musk, now the world's second-richest person after Tesla's protracted decline, said late Wednesday he would abide by the results of a Twitter poll he'd posted Sunday asking users if he should step down.

"I will resign as CEO as soon as I find someone foolish enough to take the job! After that, I will just run the software & servers teams," the billionaire tweeted. More than 57% of the poll's 17.5 million votes favored Musk's resignation.

Musk has embarked on a search for his successor as Twitter CEO, though the process "could be drawn out and take time to yield results," a confidential source told Bloomberg. The search began before Musk posted the related poll, according to CNBC. Musk replied to CNBC's story on Twitter with two "rolling on the floor laughing" emojis, before confirming he would step down hours later.

Once Musk finds a candidate he actually wants, he'll probably have to offer a better deal than the one he floated when AI researcher and podcaster Lex Fridman offered to take the position without a salary. "You must like pain a lot," Musk responded. "One catch: you have to invest your life savings in Twitter and it has been in the fast lane to bankruptcy since May. Still want the job?"

Since buying Twitter on Oct. 27, Musk has laid off more than half of the company's employees, restored the account of former President Donald Trump and others found to have violated the network's terms of service before the acquisition, and promulgated controversial Twitter policies only to change or revoke them soon after. On Tuesday, Musk said cost-cutting measures implemented since he took over Twitter has averted a $3 billion annual cash flow deficit next year.

Some Tesla shareholders have criticized Musk for neglecting his job as the CEO of the automaker on the distraction of simultaneously running Twitter. Shedding the high profile job as a self-appointed "Chief Twit" would allow Musk to focus more on Tesla, which faces growing competition and economic headwinds as a leading manufacturer of electric vehicles.

Of course, Musk has a history of saying things that turn out not to be true or are subject to change: 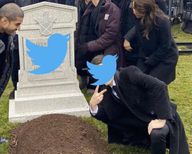 Musk Struggles to Retain Twitter Advertisers
Partner Links
Related Terms
Cryptocurrency Dogecoin (DOGE): What It Is, History, Uses
Established in 2013, Dogecoin is a peer-to-peer, open-source cryptocurrency that is categorized as an altcoin.
more
Who Is Changpeng Zhao?
Changpeng Zhao is the founder and CEO of the world’s latest cryptocurrency exchange, Binance.
more
What Is Social Networking?
Social networking is the use of internet-based social media platforms to make connections and share various media with friends, family, colleagues, or customers.
more
Poison Pill: A Defense Strategy and Shareholder Rights Plan
The poison pill is a tactic public companies sometimes use to deter a hostile takeover.
more
Class Action Definition, Lawsuits, Types, Benefits, Example
A class action is a legal course in which a plaintiff brings forward a lawsuit on behalf of a group of people who've suffered a similar loss.
more
Network Effect: What It Is, How It Works, Pros and Cons
The network effect is a phenomenon where a good or service becomes more valuable when more people use it. Read how the network effect helps companies grow.
more