Fiverr International Ltd. (FVRR) fell 4% during Tuesday's session after MKM Partners downgraded the stock from Neutral to Sell but raised its price target from $145.00 to $185.00 per share—a 21.5% discount to Monday's closing price.

MKM Partners analyst Rohit Kulkarni noted that Fiverr stock is trading at 36 times expected FY21 revenue, which is above the historical peak of any other internet marketplace in recent times and exceeds that of Zoom Video Communications, Inc. (ZM) and other pandemic plays. While fundamentals are "significantly stronger," the analyst believes that valuation levels have become "feverish."

The move comes shortly after UBS downgraded Fiverr stock to Sell on Jan. 19, saying that the risk/reward is skewed to the downside when measuring valuation against implied growth. While the analyst sees secular growth themes, there could be tough comps in 2021 alongside a premium valuation relative to its peers.

From a technical standpoint, the stock moved toward trendline support at about $222.00 during Tuesday's session. The relative strength index (RSI) continues to trade at neutral levels of 49.59, but the moving average convergence divergence (MACD) experienced a bearish crossover, suggesting that there is room for more downside ahead.

Fiverr shares moved lower after MKM Partners downgraded the stock to Sell, although the firm raised its price target to $185 per share. While analyst Rohit Kulkarni believes that the company's fundamentals are improving, valuation levels have become "feverish." Technical indicators point to more potential downside if the stock breaks down from support. 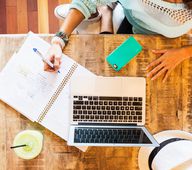 Dell (DELL) Attempts Breakout After Analyst Upgrade
Partner Links
Related Terms
Pullback: What It Means in Trading, With Examples
A pullback refers to the falling back of a price of a stock or commodity from its recent pricing peak.
more
What Is a Bear Trap?
A bear trap denotes a decline that fools market participants into opening short positions ahead of an upside reversal that squeezes those positions into losses.
more
What Is a Doji Candle Pattern, and What Does It Tell You?
A doji is a trading session where a security’s open and close prices are virtually equal. It can be used by investors to identify price patterns.
more
Head-Fake Trade
A head-fake trade is when a security's price makes a move in one direction, but then reverses course and moves in the opposite direction over a period of hours or days.
more
The Ascending Triangle Pattern: What It Is, How To Trade It
An ascending triangle is a chart pattern used in technical analysis created by a horizontal and rising trendline. The pattern is considered a continuation pattern, with the breakout from the pattern typically occurring in the direction of the overall trend.
more
What Are Double Bottom Patterns?
A double bottom pattern is a technical analysis charting pattern that characterizes a major change in a market trend, from down to up.
more