With the Federal Emergency Management Agency (FEMA) expected to announce a revised system for setting national flood insurance premiums next month, a new report says hundreds of thousands of homeowners would pay considerably more for insurance if rates accurately reflected the risk they face.

FEMA manages the National Flood Insurance Program (NFIP) through a network of about 60 insurance companies and NFIP Direct. Currently, FEMA takes a multi-zone approach to flood risk, with insurance rates based largely on whether or not a property is within a Special Flood Hazard Area (SFHA), where the insurance is required if a homeowner has a federally backed mortgage.

According to an analysis from the nonprofit research group First Street Foundation, the average rate would need to increase by 4.5 times to cover the risk on the nation’s most flood-prone homes in 2021—and by 7.2 times to cover the growing risk by 2051.

First Street identified nearly 4.3 million residential properties in the U.S. with a signifcant flood risk. It also charted annual estimated losses over a 30-year period to come up with probable premiums that homeowners would pay for flood insurance.

For properties located in an SFHA, it estimated that premiums would increase 4.2 times, to $7,895 a year. For the properties outside of an SFHA (2.7 million of the 4.3 million total), premiums would rise 5.2 times, to $2,484 a year. Currently, the average annual premium for an NFIP policy in all risk categories is about $700.

“If the necessary adjustments to premiums were put in place to accurately reflect property level risk, those homes which previously benefited most from group-based subsidized rates would see a reduction in their underlying value,” says Dr. Jeremy Porter, head of research and development at First Street.

What’s more, prices would continue going up as climate change makes flooding more likely, according to the report. The total expected loss from flooding this year is $20 billion, but that number rises to nearly $32.2 billion in 30 years.

First Street’s findings come in advance of FEMA’s expected April 1 announcement of a new rate structure for the NFIP program—the biggest change to the way it calculates flood insurance premiums since the program’s inception in 1968.

Known as Risk Rating 2.0, the initiative’s aim is to more closely match insurance prices to properties’ real-life flood risk, using modern flood-modeling methods. One key difference: Flood zones will no longer be used in calculating a property’s flood insurance premium; instead, premiums will be based on features of individual properties, such as foundation type, elevation, and replacement cost. These new premium rates will become effective on Oct. 1, 2021 for all NFIP policies nationwide.

FEMA says the public shouldn’t assume that its new rate-setting system will bring rate increases similar to those forecast by First Street.

“Any entity claiming that they can provide insight or comparison to the Risk Rating 2.0 initiative, including premium amounts, is misinformed and setting public expectations that are not based in fact,” David I. Maurstad, who serves as senior executive of the NFIP, said in a statement published in The New York Times. “The number of policies that will see large annual increases is a minority of all policyholders,” he insisted.

How to Judge Your Home's Risk

Meantime, homeowners can assess their flood risk with these three resources: 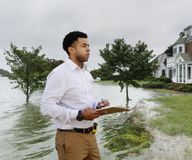 Mortgage Calculator
Partner Links
Related Terms
Flood Insurance: Definition, How It Works, Coverage, and Example
Flood insurance is a type of property coverage that protects homeowners from water damage to the structure and/or contents of their property.
more
Catastrophe Insurance
Catastrophe insurance protects businesses and residences against natural disasters, such as earthquakes and floods, and against man-made disasters.
more
What Is the National Housing Act?
The National Housing Act, passed in 1934 to strengthen the residential real estate market, created the Federal Housing Administration (FHA).
more
Understanding Endowments: Types and Policies That Govern Them
An endowment is a nonprofit’s investable assets, which are used for operations or programs that are consistent with the wishes of the donor(s).
more
What Is Hurricane Insurance? Definition, Coverage, and Costs
Hurricane insurance usually refers to an extra deductible on a homeowners policy that specifically covers hurricane-related damage in high-risk areas.
more
Force-Placed Insurance
Force-placed insurance is placed onto a mortgaged property by lien holders to provide coverage after a borrower has allowed their policy to lapse.
more