The Frontier Airlines World Mastercard, which charges an annual fee of $79 a year, allows frequent customers of the low-cost carrier to earn miles on their flight purchases, and on all other spending too. As a bonus, cardholders can earn 50,000 bonus miles after spending $500 on purchases in the first 90 days and paying the annual fee and can take advantage of the 0% APR offer on balance transfers made in the first 45 days of account opening. They also enjoy priority boarding, waived award-flight fees, and a $100 annual flight voucher after meeting annual spend requirements. 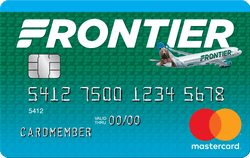 The Frontier Airlines World Mastercard is best suited, naturally, to those who fly Frontier Airlines regularly. For such travelers, the card's rewards of 5 miles per dollar spent on FlyFrontier.com should compete favorably with other cards. In addition, the $100 annual flight credit for spending at least $2,500 over the year more than justifies the cost of the card's $79 annual fee—and the value of the 50,000-mile bonus will sweeten the deal in the first year.

Provided you’ve paid the $79 annual fee, you earn 50,000 bonus miles if you spend $500 with the Frontier Airlines World Mastercard in the first 90 days after you open the account. These miles are worth roughly $310 (per Investopedia's average value estimate of 0.62 cents per mile) when redeeming your miles for flights.

According to Barclays U.S., which issues the card, you should allow four to six weeks for the bonus miles to post after the closing of the billing cycle where you meet the qualifying purchases threshold, provided the annual fee has been paid.

While Frontier miles can be used for magazine subscriptions, car rentals, or hotel stays, the most lucrative option for redeeming them is for free flights on the carrier. There are no blackout dates but, as with most such loyalty programs, the number of available awards tickets are limited.

You will also need to pay taxes and some fees for rewards flights, although any award-redemption fees are waived provided you use the Frontier Airlines World Mastercard to pay the other charges.

Award flights start at just 10,000 miles for a value one way trip within the U.S. and Puerto Rico. The most expensive one-way option is a 27,500-point elite Last Seat ticket to Mexico, the Dominican Republic, or Jamaica.

This credit card doesn’t directly offer the ability to transfer miles. That said, you can link your FrontierMiles account to Points.com and buy, transfer, or exchange your Frontier miles on the platform—although the returns from doing so are generally far less than using the points on the program on which you earned them.

Making the most of the Frontier Airlines World Elite Mastercard begins with what should be an easy step for most people: Charging at least $500 to the card in the first 90 days after you open its account (and pay its annual fee), which allows you to earn 50,000 bonus miles.

After that, make sure you put at least $2,500 of purchases on the card each cardmember year, even if it means charging everyday purchases to it at the modest 1-point-per-dollar rate. That spending will ensure you’ll earn the $100 flight voucher each year.

To get the most of your points, the best option for redeeming them is usually to book a free flight. While Investopedia values Frontier points at 0.62 cents, that’s merely an average that you’ll be able to exceed on certain flights.

For example, we found a round-trip flight from Atlanta to Puerto Rico we could buy for $138.00 including taxes and fees. The same flight could be booked for 20,000 miles plus $11.20 in taxes and fees. This booking would only value your miles at approximately 0.6 cents per mile.

A round trip flight from Chicago to Houston we could buy for $444.40, including taxes and fees. The same flight was available for 40,000 miles plus $11.20 in taxes and fees. That redemption would yield a value per mile of roughly 1.1 cents, which is nearly double the average.

The card also offers free access to your FICO Score. To view your FICO Score, your account must be open, in good standing, and have activity in the last 150 days.

As a credit card issued by Barclays U.S., this card has the ability to be locked or unlocked online or through the issuer’s mobile app. This feature can be useful when you misplace your card but you aren’t sure it fell into the wrong hands. If you find the card was in your possession, you can simply unlock the card to continue using it. However, you can also get a replacement if the card was actually lost or was in someone else's possession that could compromise your account.

The Frontier Airlines World Mastercard is of clear benefit to those who plan to fly Frontier Airlines often in the future. It offers rewards for Frontier flight purchases that should exceed those from charging Frontier expenses to another card. Its one-time bonus and annual anniversary bonus, both easily earned, will allow you to more than justify the card's $79 annual fee.

This card isn't an ideal choice for those who fly on Frontier no more than once a year or so, though. Unless you’re in the habit of using the card for transactions other than Frontier flights, points could easily expire before you use them, due to the unusually short six-month deadline during which there must be activity on your Frontier rewards account in order to preserve its rewards. For such fliers, a generic travel credit card might be a better option.

Next Steps
For Frontier Airlines World Mastercard®
on Barclaycard's Secured Site.
Compare This Card
See how this card compares to similar cards
CURRENT CARD
Frontier Airlines World Mastercard®
overall rating
3.4
Next Steps
Recommended Credit
Score Our recommended ranges are based off of the FICO® Score 8 credit-scoring model. Credit score is one of the many factors lenders review in considering your application.
350 579
580 669
670 739
740 799
800 850
Good - Excellent
Investopedia Credit Card Rating Methodology
Investopedia is committed to delivering the best credit card recommendations in the industry. We’ll tell you when a card is good, we’ll tell you when a card is bad, and we’ll only call a card the best if we would recommend it to our friends or family members.
Overall Star Rating Explained
To rate credit cards we objectively assess, score and weight nearly 100 individual card features which roll up into five major feature sets: fees, interest, rewards, benefits and security/customer service. Here’s how we weighted those feature sets for the overall star rating of a card:
We have applied our proprietary rating methodology to every generally-accepted credit card in the U.S. domestic market to allow consumers to make fully informed choices. It’s important to note that for our overall score that we make a number of assumptions about how you would be using your credit card: