The gold trade is getting overcrowded and over-loved around the $1,500 level after a powerful three-month breakout, setting the stage for an intermediate reversal and pullback that shakes out the large supply of tourists and other weak hands. The next long-side buying signal could take weeks to develop, forcing gold bugs and the financial media to stop pounding their fists on the table with enthusiastic buying calls.

The uptrend has now reached the midpoint of the decline into 2015, and there's a sound argument for continued upside into a final target at the .618 retracement below $1,600, where gold broke down from a two-year double top in 2013. However, Rome wasn't built in a day, and 12-month price structure may have completed the third wave in an Elliott five-wave pattern that now favors a fourth wave decline, dumping the yellow metal toward $1,350 and the gold fund toward $130.

A fifth wave impulse could ignite around that price zone and lift gold into heavy resistance at the 2013 breakdown level. The reward:risk profile for new long positions is steadily deteriorating as this barrier approaches, while current longs have accumulated healthy profits that need to be protected through profit-taking, stops, or options plays. Taking the right approach is critical at this juncture because the final upside target is unlikely to be mounted for months or years.

The SPDR Gold Trust (GLD) came public in the mid-$40s in November 2014 when gold was trading around $450. A minor downtrend bottomed out near $40, ahead of a 2005 rally that gathered momentum into the 2006 high at $72.26. It mounted that resistance level in the second half of 2007, lifting into the upper $90s in March 2008 when the collapse of New York investment firm Bear Stearns signaled the opening shot in the economic collapse.

The fund and yellow metal bottomed out a few weeks after the October crash and turned sharply higher, entering a historic advance that broke out above the 2008 high in the fourth quarter of 2009. Incredible upside continued in September 2011's all-time high at $185.85, giving way to a double top pattern that broke support at $148 in 2013. The subsequent decline posted heavy losses into the second half of 2015, finding support within 23 cents of the psychological $100 level.

Price action between 2013 and 2018 carved a declining trendline that broke to the upside in June 2019 after President Trump demanded that Fed Chair Jerome Powell lower interest rates to compensate for the failure to cut a trade deal with China. That political pressure has continued into the third quarter, forcing the Fed to reverse gears while underpinning inflationary fears and the gold market.

The uptrend has now reached the .50 retracement level of the multi-year downtrend and lifted within four points of the 2013 breakdown level, which marks heavy resistance. In addition, the height of the August 2018 into February 2019 rally wave now equals the height of the May 2019 into August 2018 rally wave, a telltale sign that the instrument is engaged in an Elliott wave rally pattern that has just completed a third wave buying impulse.

The three-month rally into August has also printed a continuation gap between $127 and $130, displaying another common characteristic of Elliott wave patterns. This is excellent information because a third wave continuation gap rarely gets filed before the fifth wave is completed, predicting that a fourth wave countertrend will bottom at or above $130. In turn, that could set off fresh buying signals for market timers wanting to ride a final rally wave into resistance.

Gold and the gold fund may have completed the third wave of a rally pattern that now favors a multi-week decline.

Disclosure: The author held no positions in the aforementioned securities or their derivatives at the time of publication. 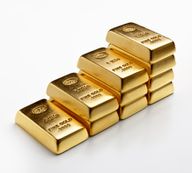 Gold May Have Bottomed Out

Gold May Have Topped Out After Historic Uptrend
Partner Links
Related Terms
Understanding the Inverse Head and Shoulders Pattern
An inverse head and shoulders, also called a head and shoulders bottom, is inverted with the head and shoulders top used to predict reversals in downtrends.
more
What Is a Cup and Handle Pattern?
A cup and handle is a bullish technical price pattern that appears in the shape of a handled cup on a price chart.
more
What Was the Great Depression?
The Great Depression was a devastating and prolonged economic recession that followed the crash of the U.S. stock market in 1929.
more
Shooting Star Definition and Applications
A shooting star is a bearish candlestick with a long upper shadow, little or no lower shadow, and a small real body near the day's low. It comes after an uptrend and marks the potential exhaustion of the rise.
more
What Are Fibonacci Retracement Levels?
Fibonacci retracement levels are horizontal lines that indicate where support and resistance are likely to occur. They are based on Fibonacci numbers.
more
Bear Market
A bear market occurs when prices in the market fall by 20% or more.
more