For many investors, retirement planning represents the bulk, or even the sum total, of their investment activity. As of 2020, there were roughly 60 million active 401(k) participants, in addition to former employees and retirees. But while millions of adults in the United States contribute toward retirement, views on retirement investing and all that goes along with it are anything but uniform.

Investopedia conducted a online survey of 4,000 U.S. adults to quantify Americans’ understanding of financial literacy on a generational level, from baby boomers down to Generation Z. Below, we explore some of the top findings of this survey as it pertains to retirement investing and planning.

One key finding of the survey is that the majority of adults across each generation expect that they will be able to retire. Among adults, 57% of ages 18–25, representing Gen Z, and 62% of millennials believe that they will retire at some point. Close to two-thirds of Gen X either expect to retire or have already retired early (as Gen X encompasses adults ages 42–57). And the large majority of baby boomers have either already retired or expect to. Younger adults expect to stop working at an earlier age (57 for Gen Z, 61 for millennials), while boomers not yet retired predict that they will hang up their hats at age 68, on average.

Depending on your perspective, the data above may be heartening or not. These majorities, particularly in the youngest generation, are slim. However, they paint a rosier picture of Americans’ view of retirement than 2021 data from the Natixis Global Retirement Index. This research report indicated that a majority of U.S. adults predicted that they would have to keep working longer than expected, with a significant minority of 40% saying it would “take a miracle” to be financially secure in retirement. The Natixis data may reflect heightened anxieties around financial planning brought on by the earlier stages of the COVID-19 pandemic; still, other data suggest that near and recent retirees may not have changed their plans on a large scale due to the pandemic.

Many Have Made Retirement Planning a Priority

As most adults expect to retire someday, a large portion of each generation has taken action toward that goal by beginning retirement planning now. About two-thirds of surveyed millennial and Gen X adults indicated that they are planning for retirement, and just over half of boomers did as well.

Perhaps unsurprisingly, Gen Z adults who are furthest from retirement age had the lowest percentage in this area. Even still, 42% of Gen Z members surveyed said they were already planning for retirement, even in their late teens and early 20s.

Generations diverge when it comes to how survey participants expect to support their retirement. The older generations, Gen X and baby boomers, plan by and large to support themselves with Social Security benefits, followed by 401(k)s and pension plans. Younger generations predict that 401(k)s will be the primary source of retirement income, but they also expect that Social Security will play an important role. A surprisingly significant minority of millennial and Gen Z adults expect that cryptocurrency investments will be important in retirement as well.

The generational skew in this data is generally in keeping with the tough realities facing Social Security going forward. As scheduled, Social Security and Medicare both will experience long-term financing shortfalls as a result of booming costs as a larger portion of the population lives longer into retirement. Officials predict some funds to be depleted by the mid-2030s. Understandably, younger adults may feel that Social Security support is by no means a given by the time they reach retirement age, and the survey results indicate that younger generations expect to prioritize other supports instead.

The youngest adults increasingly view cryptocurrency investments as a viable means of retirement planning. In a little over a decade since the launch of Bitcoin, interest in cryptocurrencies has skyrocketed, with some estimates now suggesting that one in 10 people invest in digital tokens.

With surging interest in cryptocurrencies, more investors are also incorporating tokens into their retirement plans. However, the significant volatility of digital currencies, uncertainties around regulation, and a lack of proven history as investment vehicles may make cryptocurrencies a dangerous place to go looking for long-term returns.

Another factor that is changing retirement planning is the influx of financial technology (fintech) companies focused in this area. According to economists Julie Agnew and Olivia S. Mitchell, robo-advisors, new initiatives in life insurance pricing, and technology designed to manage decumulation of assets in retirement are all among the ways that the fintech industry is already disrupting retirement.

Lack of Education, Worry Clouds Optimism for Many

Investopedia’s survey found that U.S. adults are not confident in their understanding of retirement planning. Behind digital currencies and investing, retirement was the third-least understood concept, with more than a quarter of those surveyed indicating that they have only a beginner understanding.

As above, though, the data diverges when broken down by generation. Nearly half of millennials and 40% of Gen X said they have an advanced understanding of retirement planning. Gen Z feels the least informed about retirement, which is perhaps to be expected considering that standard retirement age is at least four decades away for members of that group.

Americans not only feel uninformed about retirement planning but also feel worried about it. Retirement was listed as the top personal finance concern for about a sixth of those surveyed. Gen X, who are closest to retirement age, are particularly concerned. They have also seen dramatic economic events throughout their retirement saving years, including the Great Recession of 2007–2009 and, more recently, the economic uncertainty surrounding the COVID-19 pandemic.

By contrast, only one in 10 members of Gen Z listed retirement as the top worry. Again, this could be because retirement is furthest off for this group. It also may reflect a sense of optimism—as noted above, Gen Z expected to stop working at age 57, well ahead of standard retirement age. As Gen Z members’ earning and saving potential increases over time, it is possible that their overall feelings about retirement may shift as well.

At a time of economic uncertainty, with a complex geopolitical landscape at home and abroad and lingering impacts of a devastating pandemic, retirement may not be the most immediate priority for some American adults. Concerns about seismic shifts in the future, including the economic effects of climate change, the drying-up of Social Security funds, and ongoing wealth inequality, may also concern investors thinking about planning for retirement.

Still, there are reasons to be optimistic about the retirement landscape going forward. A significant percentage of adults are thinking about and involved in long-range planning. Fintech developments like robo-advisors and mobile trading apps can make the process of saving for retirement easier than ever before. And excellent resources are available for those who feel uncertain or overwhelmed by the prospect of planning for retirement.

The 2022 Investopedia Financial Literacy Survey quantifies U.S. adults’ understanding of their own financial literacy on a generational level. The survey was fielded via an opt-in, online self-administered questionnaire from Jan. 27, 2022, to Feb. 7, 2022, to 4,000 U.S. adults, 1,000 from each of the following generations: Generation Z (ages 18–25), millennials (26–41), Generation X (42–57), and baby boomers (58–76). Quotas and data weighting were used to ensure race/ethnicity, gender, regional, and income representation among the total and within each generation. To learn more, see the full methodology.

Research and analysis by
Amanda Morelli

Amanda is the Senior Director of Data Journalism at Dotdash Meredith (Investopedia's parent company) and she oversees development of data journalism projects for brands across the company.
Learn about our editorial policies
Article Sources
Investopedia requires writers to use primary sources to support their work. These include white papers, government data, original reporting, and interviews with industry experts. We also reference original research from other reputable publishers where appropriate. You can learn more about the standards we follow in producing accurate, unbiased content in our editorial policy.
Related Articles

How Much Do I Need to Save to Retire? 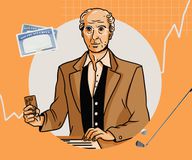 Boomers' Thoughts About Money? It's All Going to Be OK
Partner Links
Related Terms
Generation X (Gen X): Between Baby Boomers and Millennials
Generation X was born between the mid-1960s and the early-1980s, after baby boomers and before millennials.
more
Generation Z (Gen Z): Definition, Birth Years, and Demographics
Born after 1996, the oldest members of Generation Z are just starting their careers and possibly their families. Saving for retirement is a priority.
more
Baby Boomer: Definition, Years, Date Range, Retirement & Preparation
A baby boomer is a person who was born between 1946 and 1964 and belongs to a generational group that has had a significant impact on the economy.
more
Millennials: Finances, Investing, and Retirement
Learn the basics of what millennial need to know about finances, investing, and retirement.
more
The Greatest Generation: Definition and Characteristics
The Greatest Generation describes the cohort of Americans born between the decades of the 1900s and the 1920s, living through the Great Depression and WWII.
more
Generation Gap: What It Is and Why It's Important to Business
A generation gap is the differences in actions, beliefs, and tastes of members of younger generations versus older ones.
more