When you get the IHG Rewards Club Premier credit card, you have the potential to earn a large number of bonus points at IHG properties—on top of the generous one-time offer of 125,000 points. That's in addition to a variety of other perks, including a reward night on each account anniversary year, automatic Platinum Status for IHG Rewards Club members, and Global Entry or TSA PreCheck reimbursement. With all of the ways to earn points, offsetting the $89 annual fee is fairly easy. 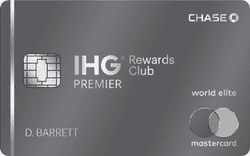 Earn 125,000 bonus points plus a Reward Night after spending $3,000 on purchases within the first three months of account opening.

The IHG Rewards Club Premier credit card is designed for people who frequently stay at IHG properties. If that's you, this card could be a good choice.

This card would also work well for anyone who wants to earn extra points on everyday purchases, like groceries and gas, or who hopes to amass a large number of points in a short period of time. The bonuses for the first year ensure that you can earn points quickly, and then begin redeeming them.

The current one-time offer for this card is 125,000 points after you spend $3,000 in the first three months. While not insignificant, this is a fairly average spending requirement for a hotel rewards card that many people should be able to reach by using the card for their ordinary monthly purchases.

It can be hard to put a precise dollar value on IHG points because their value varies according to where you redeem them and other factors. But Investopedia assigns IHG points a value of 0.75 cents per point when they're redeemed at IHG properties. So 125,000 points would be worth an impressive $938.

This is an interesting card because of its accelerated earnings when combined with being an IHG Rewards member. You get 25X points on purchases at IHG properties. This can substantially boost your rewards—on top of the one-time offer.

This breakdown comes because you get 10X base points for the stay when charged to your card, plus get 10X points on IHG purchases for being an IHG member and another 5X points because this card comes with Platinum Elite Status. As a result, when you spend at IHG properties with this card, you can receive 25X points for every dollar.

On top of points earned per dollar spent at IHG properties, you get 2X points on groceries, gas, and restaurants. On top of that, you get 10,000 bonus points if you spend $20,000 on the card each year.

You can redeem your points for a variety of rewards, including reward nights at hotels, merchandise, and gift cards. However, your best results are going to come from redeeming points for hotel stays.

For example, if you want a $50 Apple Store gift card, it will cost you 25,000 points, making each point you redeem this way worth about 0.20 cents—roughly a quarter of what you’d get if you redeemed those points for a hotel stay instead.

When you book rewards stays, you can get an award night with as little as 10,000 points. Bear in mind that it is not possible to retroactively apply points to previous stays you may have paid for, however.

It's possible to transfer your points to airlines and other partners. However, you are unlikely to get the same value out of these transfers as you would by redeeming them with IHG for rewards nights.

For example, many partner airline programs will only give you 2,000 miles when you transfer 10,000 IHG points. Some programs, like AIR MILES, offer even lower transfer rates, like 10,000 points for 250 miles.

So before you transfer points, consider the value of the miles. If you just need a few more miles to book airfare, it might be worth it to transfer some of your points, even without the one-to-one benefit.

The best way to maximize your rewards is to stay at IHG properties whenever possible. You'll earn points faster for the stays, and be able to use them more efficiently as well.

You can also benefit from earning 2X points per dollar for everyday purchases, like gas and groceries, as well as spending at restaurants, which can further build up your points balance.

Additionally, when redeeming for rewards nights, try to take advantage of the fact that your fourth night is free.

Chase, which issues the IHG Rewards Club Premier credit card, received a score of 809 out of 1,000 in J.D. Power's 2020 U.S. Credit Card Satisfaction Study. That’s one point below the national issuer average of 810.

You can manage your card from your online account, or you can call the number on the back of your card to speak with someone in customer service.

In general, this card's fees are fairly standard. But if you're thinking of transferring a balance from another card, note that there's no 0% APR offer and the balance transfer fee is a relatively steep 5%.

If you often stay at IHG properties and would enjoy some free nights at them, this card is a good choice. Overall, it's in line with many other co-branded credit cards, like the Marriott Bonvoy Boundless or the Hilton Honors Surpass, in terms of rewards. However, those cards don’t offer the equivalent of IHG's Platinum Elite status, but instead relegate you to a lower tier. Both of those cards also have annual fees of $95. Even so, one of them might suit your needs better than this card, depending on where you’re more likely to stay.

In general, hotel rewards cards offer less value per point than other types of cards, and to get the most out of your redemptions, you need to be fairly loyal to a particular brand.

Next Steps
For IHG® Rewards Club Premier Credit Card
on Chase's Secured Site.
Compare This Card
See how this card compares to similar cards
CURRENT CARD
IHG® Rewards Club Premier Credit Card
overall rating
3.3
Next Steps
Recommended Credit
Score Our recommended ranges are based off of the FICO® Score 8 credit-scoring model. Credit score is one of the many factors lenders review in considering your application.
350 579
580 669
670 739
740 799
800 850
Good - Excellent
Investopedia Credit Card Rating Methodology
Investopedia is committed to delivering the best credit card recommendations in the industry. We’ll tell you when a card is good, we’ll tell you when a card is bad, and we’ll only call a card the best if we would recommend it to our friends or family members.
Overall Star Rating Explained
To rate credit cards we objectively assess, score and weight nearly 100 individual card features which roll up into five major feature sets: fees, interest, rewards, benefits and security/customer service. Here’s how we weighted those feature sets for the overall star rating of a card:
We have applied our proprietary rating methodology to every generally-accepted credit card in the U.S. domestic market to allow consumers to make fully informed choices. It’s important to note that for our overall score that we make a number of assumptions about how you would be using your credit card: