What Is an Income-Share Agreement (ISA)?

An income-share agreement (ISA) is a form of college financing wherein repayments are based on a student’s future income. An ISA provider gives the student money to pay for college, and the student contractually agrees to pay the provider a percentage of their salary for a set period of time.

With most ISAs, the income-share rate is anywhere from 2% to 10% of the student’s future salary. That means when their salary rises, so does the ISA payment. However, the repayment term and total repayment amount are capped.

Unlike student loans, ISAs do not accrue interest, but many students do end up paying back more than the original amount that they borrowed. Most ISAs do not require a cosigner or good credit, so they are more attainable for some students than other types of financing.

The concept of using an ISA to pay for college was first introduced in an essay by Milton Friedman in 1955. Friedman claimed that debt is an inappropriate way to finance education. Instead, he suggested using a method similar to investing in the stock market, by which the amount of a lender’s payment is determined by the student’s success—just as a shareholder benefits when a corporation grows.

With student loan debt at all-time highs, ISAs are slowly gaining popularity among students. In 2019, more than $250 million in ISAs were originated, with an additional $500 million expected in 2020. However, unlike student loans, ISAs are not widely available. Most ISAs are offered through four-year colleges or universities, coding bootcamps, or other career schools and private lenders.

The most well-known ISA is Purdue University’s "Back a Boiler” program, which bases its income-share rate on the student’s field of study. ISAs for higher-paying college majors, such as chemical engineering, typically have a lower rate and a shorter term than those offered to students in lower-paying majors. Coding academies (career schools that teach computer programming) have also started to offer ISAs as a form of financing. As these schools are typically unaccredited, they are not eligible for federal financial aid. One example is Bloom Institute of Technology (formerly Lambda School), where graduates aren’t required to make payments until their salary reaches $50,000.

ISAs are also offered through a few private lenders. Stride Funding, a private ISA financier, provides students up to $25,000 in funding per school year, which is disbursed directly to their college. Rates are calculated based on a student’s major, which school they attend, and when they expect to earn a paycheck.

ISAs do not accrue interest and generally have a fixed-term repayment period. However, they are also not subject to consumer protection law.

Advantages and Disadvantages of ISAs

ISAs can be appealing to borrowers because they don’t accrue interest and have a set repayment period. That said, the market for ISAs is largely unregulated by the federal government and the states, which can be risky for borrowers. ISA proponents argue that the agreements are neither a loan nor credit, which means they would not be subject to consumer protection law. However, there is some disagreement about that, and much remains to be determined.

According to the Student Borrower Protection Center (SBPC), issuers of ISAs may engage in the following practices, which can harm student borrowers:

A recent study from the SBPC found evidence of racial discrimination by Stride Funding. Stride considers a borrower’s school and field of study when determining their income-share rate, two factors that are closely associated with race.

Data revealed that students who attended historically Black colleges and universities (HBCUs) paid more for a Stride Funding ISA product than students from comparable non-HBCU colleges did. For example, a computer science major attending Tuskegee University, an HBCU, was quoted $2,802 higher for a $10,000 ISA than an Auburn University student with the same major. The study found similar disparities among students who attend other minority-serving institutions (MSIs), such as Hispanic-serving institutions (HSIs).

Students should carefully consider all of their options when borrowing money to pay for college. It’s important to consider the total payback amount and compare that with the amount a student loan would cost. Whether or not an ISA is a good option to pay for college depends on the student and their individual circumstances.

Article Sources
Investopedia requires writers to use primary sources to support their work. These include white papers, government data, original reporting, and interviews with industry experts. We also reference original research from other reputable publishers where appropriate. You can learn more about the standards we follow in producing accurate, unbiased content in our editorial policy.
Take the Next Step to Invest
×
The offers that appear in this table are from partnerships from which Investopedia receives compensation. This compensation may impact how and where listings appear. Investopedia does not include all offers available in the marketplace.
Service
Name
Description
Related Terms
Education Loan: Definition, Types, Debt Strategies
An education loan is a sum of money borrowed to finance college or school-related expenses while pursuing an academic degree. Education loans can be obtained from the government or through private-sector lending sources.
more
Student Debt Definition
Student debt refers to loans used to pay for college tuition that are due after the student graduates or leaves school.
more
Federal Direct Loan Program
The Federal Direct Loan Program is a federal program that provides low-interest loans to post-secondary students and their parents.
more
Paycheck Fairness Act
The Paycheck Fairness Act is proposed legislation that builds on previous laws and is designed to help close the gender pay gap.
more
Stafford Loan
A Stafford loan is a type of federal, fixed-rate student loan available to college and university undergraduate, graduate, and professional students attending college at least half-time.
more
What Is Redlining? Definition, Legality, and Effects
Redlining is the discriminatory practice of denying services (typically financial) to residents of certain areas based on their race or ethnicity.
more
Partner Links
Related Articles

How to Get Your Student Loans Forgiven 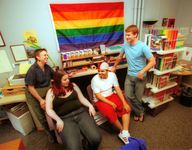 How to Apply for Student Loans