Car loans have become more expensive since the Federal Reserve increased the prime interst rate in October and November 2022. The average interest rate on a car loan in October 2022 was 10.6%, almost double the cost of a loan in early 2022.

Interest rates are only part of the story, however. Cars are also more expensive now than they were before the pandemic, because automakers have been hit with supply chain difficulties. Ultimately, a combination of high prices and high interest rates might make new cars unaffordable for low- and middle-income families, at least in the short-term.

We are already seeing that effect. Though the Best Auto Loan rates are still as low as 4%, but for customers with poor or limited credit it will likely dramatically increase the cost of a loan. In the last month the weighted average auto loan rate across all loan types has increased by 2.8 percentage points to 10.6%. People with low credit scores are likely to be hit hardest by these price increases. In October, a deep subprime borrower, with a credit score under 580, saw an average rate of 18.2% on a new-vehicle loan and 21.8% on a used-vehicle loan.

The Cost Of New Cars Is Rising

It’s important to put these interest rates in perspective. Though auto loans are now much more expensive than they were earlier this year, they are still much cheaper than they were ten years ago. The average rate for a car loan has fluctuated from an all-time high of 17.36% in late 1981 to an all-time low of 4.00% in late 2015. Interest rates have remained in the 4.00%–5.50% range for the entirety of the last decade, except for the last few months.

But interest rates are not the only factor making new cars more expensive. The purchase cost of new cars has also increased sharply during 2022, due to chip shortages and pandemic supply chain issues. The average price paid for a new car in September 2022 was above $48,000, after five consecutive months of increase.

Some analysts fear that these factors may mean that only rich families will be able to buy a new car in the short-term. As Jonathan Smoke, chief economist at Cox Automotive, has pointed out, the combination of interest rate increases and rising car costs now means that the least expensive new car available in the US – a 2022 Chevrolet Spark – will cost more than $400 a month to finance. And for many lower and middle-income families, that makes buying a new car an unaffordable luxury.

More Car Owners Are Struggling With Their Auto Loans

Many New Car Buyers Are Paying More Than $1,000 a Month 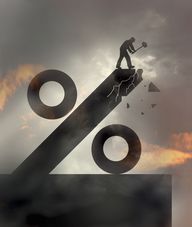 Interest Rate Trends for Card, Auto, and Mortgage Loans
Partner Links
Related Terms
Prime Rate Definition
The prime rate is the interest rate that commercial banks charge their most creditworthy customers.
more
Federal Funds Rate: What It Is, How It's Determined, and Why It's Important
The federal funds rate is the target interest rate set by the Fed at which commercial banks borrow & lend their extra reserves to one other overnight.
more
Interest: Definition and Types of Fees For Borrowing Money
Interest is the monetary charge for the privilege of borrowing money, typically expressed as an annual percentage rate.
more
Predatory Lending
Predatory lending imposes unfair, deceptive, or abusive loan terms on a borrower. Many states have anti–predatory lending laws.
more
Subprime Loan: Definition, Uses, Downsides
A subprime loan is a loan offered at a rate above prime to individuals who do not qualify for prime-rate loans.
more
Interest Rates: Different Types and What They Mean to Borrowers
The interest rate is the amount lenders charge borrowers and is a percentage of the principal. It is also the amount earned from deposit accounts.
more