Shares of The Kroger Company (KR) rose nearly 6% during after-hours trading on Friday after Warren Buffett's Berkshire Hathaway Inc. (BRK.A) disclosed that it purchased about 19 million shares worth over a half billion dollars – representing about 2.3% of outstanding shares. While the billionaire investor hasn't offered any commentary, his successful track record is a draw to many investors and could boost the stock price.

The move comes as Kroger's management team has faced criticism over its underwhelming three-year plan introduced two years ago. Despite easy comps and a favorable pricing environment, the company failed to deliver strong margins during the third quarter, and some analysts are starting to question management's ability to execute. The involvement of Berkshire Hathaway could help alleviate some of these fears.

With a valuation of more than $1 billion, Kroger is one of three publicly traded grocery chains alongside Sprouts Farmers Markets, Inc. (SFM) and Weis Markets, Inc. (WMK). Albertsons is reportedly considering an initial public offering that could result in a $19 billion valuation, according to The Wall Street Journal, which could create a third publicly traded competitor.

From a technical standpoint, Kroger stock is poised to rebound from its 50-day moving average at $28.11 to retest its reaction highs of around $29.00 over the coming sessions. The relative strength index (RSI) remains neutral with a reading of 53.66, while the moving average convergence divergence (MACD) experienced a modest upswing this month. These indicators suggest that the stock could have room to run.

Traders should watch for a breakout from reaction highs of $29.00 toward trendline resistance at around $30.00. If the stock moves lower, traders could see a move toward trendline support or reaction lows of around $27.00, although that scenario seems less likely to occur given the bullish Berkshire Hathaway news over the extended weekend. The company's next earnings release is slated for March 5, 2020.

Why Did Warren Buffett Invest Heavily in Coca-Cola in the Late 1980s?

Is Berkshire Hathaway Suitable for an IRA? 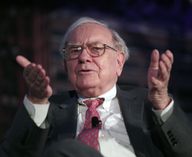 Berkshire Cuts Bank Holdings, Takes Position in Gold
Partner Links
Related Terms
Stock Symbol (Ticker Symbol): Abbreviation for a Company's Stock
A stock symbol is a unique series of letters assigned to a security for trading purposes.
more
Poison Pill: A Defense Strategy and Shareholder Rights Plan
The poison pill is a tactic public companies sometimes use to deter a hostile takeover.
more
What Is the Einhorn Effect?
The Einhorn effect is the sharp drop in a company’s share price that often occurs after investor David Einhorn publicly shorts that company’s stock.
more
Initial Public Offering (IPO): What It Is and How It Works
An initial public offering (IPO) refers to the process of offering shares of a private corporation to the public in a new stock issuance.
more
Special Purpose Acquisition Company (SPAC) Explained: Examples and Risks
A special purpose acquisition company (SPAC) is a publicly traded company created for the purpose of acquiring or merging with an existing company.
more
FTX: An Overview of the Exchange and Its Collapse
FTX, once the third-largest centralized cryptocurrency exchange, is now in U.S. bankruptcy. Its founder faces criminal and civil charges and goes to trial in October.
more