Chase, U.S. Bank, Wells Fargo, and other major credit card issuers have announced a new pilot program to make it easier for consumers without a credit score to be approved for a credit card. The banks plan to share checking and savings account information to develop an alternative way to gauge applicants' creditworthiness, according to a Wall Street Journal report.

Historically, it's been extremely difficult to get approved for a credit card—even a secured credit card—with no credit score. While some credit card companies allow for co-signers, many major issuers do not.

Now, however, some of the largest banks in the U.S. are working at the prompting of regulators to brainstorm ways to evaluate financial responsibility outside of the credit system. Instead of focusing on past dealings with creditors, card issuers would look to an applicant's bank accounts to assess their financial responsibility.

If an applicant doesn't have a credit score, for instance, but has no overdrafts or returned checks on their checking account, that could improve their odds of being approved for a credit card.

This isn't an entirely new concept. Petal made a splash in the credit card industry in 2018 when it launched a new credit card that didn't require a credit score for approval. Instead, the fintech company requested that applicants connect their financial accounts, and the company would develop a cash flow score based on how they managed their money.

That same year, FICO announced a new credit scoring system that includes how consumers manage their bank accounts. So far, no banks have used it.

Some big banks have executed small-scale initiatives with the concept, though. Chase, Bank of America, and others have tweaked their risk models for existing customers with limited or no credit history to include bank account activity with the same bank.

The new pilot program, which is set to start later this year, goes beyond that, with some 10 banks agreeing to exchange data. Applicants are not required to have a bank account with the credit card issuer they're applying to.

The banks are also discussing potential partnerships with financial data aggregators like Plaid and Finicity to consider an applicant's history of rent and utility payments in credit applications.

When it comes to consumer debt, credit card debt is far from ideal. But according to FICO, more than 50 million adults in the U.S. don't have a traditional credit score. So when they need credit, they're forced to rely on much more expensive and sometimes predatory options, including payday loans.

The Consumer Financial Protection Bureau highlighted the issue in a 2015 report, showing that Black and Latino adults were more likely to have no credit score than White and Asian adults.

Without a credit score, it's virtually impossible to get access to other forms of credit, such as auto loans, mortgage loans, and even private student loans, especially at reasonable rates.

The upcoming pilot program got its initial spark from Project REACh, short for Roundtable for Economic Access and Change. The effort was launched by the Office of the Comptroller of the Currency and challenged bankers, fintech executives, and nonprofit leaders to develop ideas on how to increase access to credit for disadvantaged communities.

An underwriting system that considers alternative credit data can make it easier for people in these communities to qualify for a credit card. And if they use the card to demonstrate good credit habits, it can help them build a credit history, opening up more opportunities for fairly priced auto loans, mortgages, and more.

Getting Your Credit Score from a Bank

How to Improve Your Credit Score Fast

800-Plus Credit Score: How to Make the Most of It 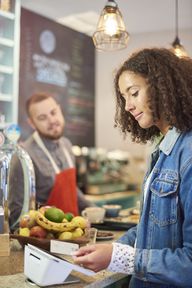 Guide to Student Credit Cards
Partner Links
Related Terms
Credit Monitoring Service Definition
A credit monitoring service is a system that monitors a consumer’s credit reports for signs of possible fraud.
more
Credit Score: Definition, Factors, and Improving It
A credit score is a number from 300 to 850 that rates a consumer’s creditworthiness. The higher the score, the better a borrower looks to potential lenders.
more
What Is a Checking Account? Here's Everything You Need To Know
A checking account is a highly liquid transaction account held at a financial institution that allows deposits and withdrawals.
more
Personal Finance
Personal finance is about managing your budget and how best to put your money to work to realize your financial independence and goals.
more
Credit Freeze
A credit freeze is an anti-fraud measure in which a credit bureau refrains from sharing a consumer’s credit report with any third parties.
more
Cash Advance: Definition, Types, and Impact on Credit Score
A cash advance is a service provided by credit card issuers that allows cardholders to immediately withdraw a sum of cash, often at a high interest rate.
more
Dialog Heading