Requiring no security deposit, the Milestone Gold Mastercard is among a few cards that allow those with bad credit or no credit at all to get credit without having to put down money. Its minimum credit limit is $300 and its annual fee can be as high as $99. 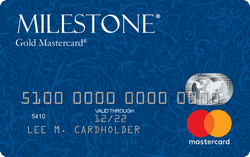 Apply Now
On The Bank of Missouri's Secured Site.
Recommended Credit Score Our recommended ranges are based off of the FICO® Score 8 credit-scoring model. Credit score is one of the many factors lenders review in considering your application.
350 579
580 669
670 739
740 799
800 850
Poor - Excellent
how this card stacks up
When compared among all low cost cards in our database:
Low Fees
Security/Customer Experience
Low Interest
Rewards
Benefits
worst best
Read our full methodology.

The Milestone Gold Mastercard is not one of our top-rated credit cards. You can review our list of the best credit cards overall for what we think are better options.

The Milestone Gold Mastercard is designed for applicants with poor credit (which Experian, one of the three credit bureaus, defines as having a credit score of between 300 and 579) who want to build or restore their credit history (the card’s transactions are shared with those agencies). It’s also for such people who prefer not to (or cannot) come up with the security deposit required for a secured card, the leading alternative for those with no or damaged credit who want to improve their creditworthiness.

Compared to the issuers of some competing cards, Milestone makes less clear the size of credit limit you’ll receive initially, and if and how it might grow in the long run—other than promising an initial line of at least $300 (minus the amount of the annual fee). That disparity in details makes the Milestone Gold Mastercard more for people eager to build their credit than who want a card with which they can use a growing credit limit.The Milestone Gold Mastercard also has no travel benefits and charges a fee (albeit of a low 1%) on transactions made in foreign currency. That makes it a poor choice to take along on a trip, even compared to other cards aimed at those with credit issues.

Also, like many cards aimed at credit-challenged consumers, the Milestone Gold Mastercard has a fixed and fairly high APR of 24.9%. Because of that rate, the card is less than ideal for those who wish to carry a balance on the card, since interest charges will add up especially quickly. (In addition, the card’s value in building a positive credit history will be reduced somewhat if you consistently carry a balance, since that will use more of your credit limit—and the lower your “credit utilization, the better, as far as credit bureaus are concerned.

This card offers a few standard benefits that you’d expect of an unsecured card:

You can access customer service through secure messaging, or you can call 1-866-453-2636. However, customer service is only available during select hours, rather than 24/7, as most major card issuers provide. Customer support can be reached from 6:00am to 6:00pm Pacific Time, seven days a week. Such limited hours can make it difficult to get help if you have questions or problems outside of the issuer’s availability, so keep that in mind before applying for a card.

With this card, you’re eligible for Mastercard ID Theft Protection. This service provides comprehensive monitoring of your Social Security number, email addresses, and credit card accounts. If your identity is compromised, identity-theft resolution specialists are available to help you recover 24 hours a day, seven days a week.

The Milestone Gold Mastercard potentially allows access to a credit card even if you have fair and even poor credit. However, that alone may not be enough to justify applying for this card over better options that fill the same need. The card comes with an annual fee of up to $99 a year, which is charged to the card and cuts into its credit limit, at least until you pay it back. Its credit limit can be as low as $300, and it’s unclear precisely how much your limit might be for you, and whether it might rise in future if you use the card responsibly. Look to alternatives to this card that are also aimed at the credit-deficient. If you can qualify for the Petal Visa, for example, the card is entirely fee-free. Not only does it lack an annual fee, then, but it also eschews the myriad of other fees that the Milestone Gold Mastercard and most other such cards impose, including those for foreign transactions, late payment, and exceeding your credit limit. The Petal Visa also allows you to earn cash back on your everyday purchases.

Because it requires a security deposit (of at least $200), the OpenSky Secured Visa may be easier to qualify for than the Petal Visa, and its APR on purchases is notably low. The card does, however, also have an annual fee, of $35, which is deducted from your credit limit.

Another worthy secured card, the Discover it Secured Mastercard, has no annual fee and offers rewards. You’ll earn 2% cash back on up to $1,000 in combined purchases at gas stations and restaurants each quarter and an unlimited 1% cash back on all other purchases. Discover will even match all cash back earned during your first year as a cardmember, effectively doubling your rewards.The rewards can really add up with the Discover it Secured Mastercard. For example, let’s say you spent $5,000 on your card during your first year as a cardmember: $1,000 on gas stations and restaurants in each quarter, and $1,000 on other purchases. You’d earn $90 in rewards during the year: $80 from gas and dining spending ($4,000 x 2%) and $10 from the miscellaneous purchases ($1,000 x 1%). And, with Discover’s cashback match, you’d end up with $180 in cash back rewards in that first year. If you’re still weighing an application for the Milestone Gold Mastercard, consider getting the card mostly as a short-term tool you can use to establish your credit. If you use the card responsibly and make all of your payments on time, you can build your credit score. After a year or two, you may be able to qualify for a better card. You could then consider closing your account with the Milestone Gold Mastercard, to avoid having to pay its ongoing annual fees.

A final note: This card is nearly identical to another on the market, the Indigo Platinum Mastercard, which shares many of its shortcomings. That other card, though, is issued by another small regional bank and offers a version with no annual fee along with two versions that do have annual fees, depending on creditworthiness.

Apply Now
For Milestone® Gold Mastercard®
on The Bank of Missouri's Secured Site.
Compare This Card
See how this card compares to similar cards
CURRENT CARD
Milestone® Gold Mastercard®
overall rating
1.9
Apply Now
Recommended Credit Score Our recommended ranges are based off of the FICO® Score 8 credit-scoring model. Credit score is one of the many factors lenders review in considering your application.
350 579
580 669
670 739
740 799
800 850
Poor - Excellent
Investopedia Credit Card Rating Methodology
Investopedia is committed to delivering the best credit card recommendations in the industry. We’ll tell you when a card is good, we’ll tell you when a card is bad, and we’ll only call a card the best if we would recommend it to our friends or family members.
Overall Star Rating Explained
To rate credit cards we objectively assess, score and weight nearly 100 individual card features which roll up into five major feature sets: fees, interest, rewards, benefits and security/customer service. Here’s how we weighted those feature sets for the overall star rating of a card:
We have applied our proprietary rating methodology to every generally-accepted credit card in the U.S. domestic market to allow consumers to make fully informed choices. It’s important to note that for our overall score that we make a number of assumptions about how you would be using your credit card: