Elon Musk's bid to acquire Twitter, Inc. (TWTR) may have just gotten a step closer to becoming reality. In a May 4 amendment to his previously filed Schedule 13D, Musk revealed that he has put together roughly $7 billion in funding for his takeover efforts from nearly 20 sources. Investors include Silicon Valley luminaries, venture capital funds, and more. The new filing seems to indicate that Musk is making arrangements to move forward with the acquisition of Twitter after the company's board accepted his offer on April 25.

Who Has Offered Funding?

The filing also shows that Saudi Prince al-Waleed bin Talal will retain his stake of roughly 35 million Twitter shares, valued at about $1.9 billion, after Musk buys the company. In a tweet, Prince al-Waleed voiced his support for Musk and the acquisition effort.

One major impact of the recent filing on the acquisition bid is that Musk will adjust the amount he borrows against his shares in Tesla, Inc. (TSLA) to finance the effort. Musk had previously planned to include a $12.5 billion loan against his Tesla stake; the filing indicates that it will be reduced by half to $6.25 billion. Musk's original financing package for the deal also included loans from several banks as well as a $21 billion cash contribution.

The filing may also shift public sentiment around the acquisition itself. The price of Tesla stock reflected broad investor uncertainty around Musk's highly publicized takeover efforts in late April, as shares fell by about 20% in a single day. Still, investors may be hesitant: Tesla shares dropped by about 8% in the day following the filing. Twitter shares jumped up by about 5% over the same period.

Where Is Elon Musk Getting the Money to Buy Twitter?

A May 4 filing with the SEC indicates that Elon Musk has secured about $7 billion in financing support from nearly 20 entities. He may supplement this with loans from banks, a cash contribution, and a loan against his shares of Tesla.

Who Is Contributing Money to Elon Musk Buying Twitter?

The May 4 filing indicates that Elon Musk has received commitments from venture capital firms such as Sequoia Capital and Vy Capital, as well as Oracle co-founder Larry Ellison, cryptocurrency exchange Binance, and other sources.

How Much Money Has Elon Musk Raised?

The total contributions indicated in the May 4 filing are roughly $7 billion, although Musk may secure additional funding going forward as well. 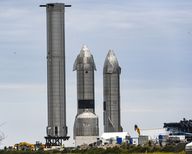 The 10 Richest People in the World
Partner Links
Related Terms
Who Is Changpeng Zhao?
Changpeng Zhao is the founder and CEO of the world’s latest cryptocurrency exchange, Binance.
more
Poison Pill: A Defense Strategy and Shareholder Rights Plan
The poison pill is a tactic public companies sometimes use to deter a hostile takeover.
more
Cryptocurrency Dogecoin (DOGE): What It Is, History, Uses
Established in 2013, Dogecoin is a peer-to-peer, open-source cryptocurrency that is categorized as an altcoin.
more
James H. Clark
James H. Clark is a serial and successful entrepreneur, perhaps best known for co-founding Netscape in 1994, along with Marc Andreessen.
more
Long-Term Stock Exchange (LTSE)
The Long-Term Stock Exchange (LTSE) is a new national securities exchange designed for companies and investors with long time horizons.
more
Who Is Larry Ellison? Who He Is and His Successs in Business
As founder and CEO of software giant Oracle, Larry Ellison built the company that revolutionized the way businesses access and use data.
more