The NASDAQ 100 (NDX) seems to be a picture of robust health, easily outperforming the S&P 500 this year by rising by about 8 percent versus the S&P's 1.9 percent. But four red flags have emerged that suggest that technology stocks may be about to give back much of this year's gains. An analysis of the technical charts suggests that the NASDAQ 100, the Select Sector SPDR Technology ETF (XLK ), Microsoft Corp. (MSFT ), and Apple Inc. (AAPL) could be set to fall, and some declines could be as much as 15 percent.

The technology ETF, Microsoft and Apple also have outperformed the broader market this year, rising 7 percent, 9 percent and 4.5 percent respectively. But now the charts of Microsoft, Apple, the technology ETF, and the Nasdaq 100 are looking eerily similar in a bearish way, suggesting that reversals may be ahead.

The NASDAQ 100 appears to be in the early stages of making a double top formation, which is characterized by two consecutive peaks in price, signaling a bearish reversal of an uptrend. In the case of the NASDAQ 100, a double top would be confirmed if the index fell below the 6,150 support level last seen during the recent sell-off from early February, a decline of 11 percent from its current level of around 6,910. Should the index find support at around 6,650 which is the stock's March low, that may indicate further declines can be avoided.

Microsoft is also exhibiting the same trading patterns, with the makings of a double top at $95.70, and the stock appears to be trending lower since late February. The decline in Microsoft could take the stock back to its lows of around $84.50 seen in early February, a drop of about 12 percent, from its current price around $93.75. If the stock can find support at approximately $91.40, then it may prevent further losses.

Apple also appears to be moving toward a double top formation, although not as pronounced. If Apple actually forms a double top, then the declines could be potentially steeper than other tech stocks. That could retest the lows seen in February, taking the stock down to roughly $150, a decline of about 15 percent from its current price around $177.50.

For now, the risks seem to be growing that the technology sector is setting up for a reversal in the coming days and weeks. Those bearish signs are just another indicator of how volatile the stock market has become in 2018 after a 2017 marked by relatively small market swings and record gains. 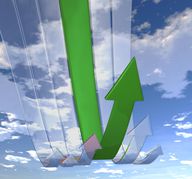 Facebook Parent Meta (FB) Attempting to Break Out
Partner Links
Related Terms
Double Top Definition
A double top is an extremely bearish technical reversal pattern that forms after a stock makes two consecutive peaks.
more
What Is a Doji Candle Pattern?
A doji is a name for a session in which the candlestick for a security has an open and close that are virtually equal and are often components in patterns.
more
Swing High Definition and Tactics
Swing high is a technical analysis term that refers to price or indicator peak. Swing highs are analyzed to show trend direction and strength.
more
Market Sentiment
Market sentiment reflects the overall attitude or tone of investors toward a particular security or larger financial market.
more
What Is the Nasdaq Composite Index?
The Nasdaq Composite Index is a broad-based market index that includes more than 3,700 stocks listed on the Nasdaq stock exchange.
more
Triple Top Definition
A triple top is a technical chart pattern that signals an asset is no longer rallying, and that lower prices are on the way.
more