Companies have doubled purchases of their own stock since President Donald Trump signed the GOP tax overhaul. The Republican tax plan slashed the corporate tax rate from 35% to 21% and made it more attractive for America's most powerful companies to repatriate billions in overseas cash.

According to data provided by Birinyi Associates, 61 corporations have announced $88.6 billion in stock buybacks between Jan. 1 and Feb. 6, compared to the 58 companies that announced a collective $40.3 billion in repurchases over the same period last year.

Corporate share buybacks are now at their second-highest level in the same year-to-date (YTD) period going back to 2009, the first year of the bull market. The figure is exceeded only by 2016, wherein 127 firms announced $104.8 billion in buybacks during a volatile period for the stock market and a broader selloff.

"We're seeing a significant increase this year versus the same period of last year. In 2016, you saw a correction in the market, and companies came in and used the weakness to buy back their stock," said Jeff Rubin, Birinyi's director of research. "2016 was the largest in this bull market."

Among the largest repurchases this year include $22.6 billion by Wells Fargo Corp. (WFC), which has recently seen its shares tank on a decision by the Federal Reserve Bank to restrict the bank's growth in response to "widespread consumer abuses." Google parent company Alphabet Inc. (GOOG) came in second at $8.6 billion, followed by Visa Inc. (V) at $7.5 billion and eBay Inc. (EBAY) tied with Mondelez International Inc. (MDLZ) at $6 billion. (See also: Wells Fargo: Fed Action Is a Buying Opportunity.)

The data helps validate claims by Democratic lawmakers, who opposed the bill due to claims that it would be used primarily for things such as buybacks for the purpose of inflating shareholders' wallets rather than increasing wages or boosting capital expenditures. On Wednesday, Senate Democrats pointed to an analysis released by Sen. Ron Wyden along with Sens. Bob Casey and Sheldon Whitehouse showing that companies have announced $97.2 billion in share buybacks YTD. 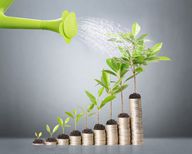 Russian Troops Building at Border, Potential Fed Rate Hike, Rattle Markets
Partner Links
Related Terms
What Is a Buyback?
A buyback is a repurchase of outstanding shares by a company to reduce the number of shares on the market and increase the value of remaining shares.
more
Leveraged Buyback
A leveraged buyback is a corporate finance transaction that enables a company to repurchase some of its shares using debt.
more
What Was the Great Depression?
The Great Depression was a devastating and prolonged economic recession that followed the crash of the U.S. stock market in 1929.
more
Who Is Charlie Munger?
Charlie Munger is Vice Chair and second-in-command to Warren Buffett, the legendary investor who chairs the $355-billion conglomerate, Berkshire Hathaway.
more
What Are Retained Earnings?
Retained earnings are a firm's cumulative net earnings or profit after accounting for dividends. They're also referred to as the earnings surplus.
more
Who Is Bernard Arnault?
Arnault, the wealthiest person in France and one of the wealthiest in the world, is Chair and CEO of LVMH, the world's largest luxury conglomerate.
more