After posting stellar gains in 2017, the outlook for U.S. stocks remains bright in 2018, according to an indicator used by Bank of America Merrill Lynch. That same barometer correctly forecast the robust market last year, CNBC reports. Given the indicator's latest reading, "total returns over the subsequent 12 months have been positive 93 percent of the time, with median 12-month returns of 19 percent," as CNBC quotes from a BofA Merrill Lynch Global Research report.

Called the Sell Side Consensus Indicator, this market barometer was developed by Merrill Lynch in 1985, per CNBC. It measures the average equity allocation being recommended by market strategists. It's a contrarian indicator based on this specific finding: the more cautious or bearish strategists are, shown by recommending low stock allocations to their clients, the more likely stocks are to post gains in the succeeding 12 months. The reverse also holds: when the strategists are bullish, stocks do less well. Based on data as of November 30, this indicator is registering relatively bearish sentiment, per CNBC.

It would be highly unusual for the stock market to post a 19% total return this year after posting other-worldly returns last year, when stock indexes broke one record after another. As a result, there are many skeptics who argue the stock market will stage a sharp correction, a fall of at least 10 percent, or even slip into a bear market.

One of them is veteran market strategist Byron Wien, currently vice chair of the Private Wealth Solutions Group at The Blackstone Group LLC, who expects a long-overdue market correction to take place in 2018, according to another CNBC report. He foresees a speculative binge in 2018 followed by a selloff that brings the S&P 500 down to 2,300, or 14.7% below its January 3 open, per CNBC. Higher interest rates, spurred by a rollback of quantitative easing by the Federal Reserve, will be a contributing factor in the correction, Wien says. He also anticipates a regulatory crackdown on bitcoin trading, given risks that "are so great," as CNBC quotes him.

'The Market Has Lost Steam'

Upward price momentum in U.S. stocks appears to be weakening, suggesting that a correction may be on the horizon, according to technical analysis by Barron's columnist Michael Kahn. In writing about his analysis of Bollinger Bands for the Dow Jones Industrial Average (DJIA), Kahn says "when the market makes a high above the bands--which we saw in early December--and then makes a higher high within the bands, it tells us the market has lost steam."

Kahn also cites several reasons for bearishness on a fundamental level: tax reform is no longer a source of hopeful speculation; North Korea is making new threats; unrest is building in Iran, a major oil producer; and a U.S. government shutdown may be looming. Additionally, to toss in a seasonal pattern, he cites research from Jeff Hirsch, editor of the Stock Trader's Almanac, indicating that January historically is not a particularly strong month in midterm Congressional election years, as is 2018.

It should be noted that even BofA Merrill Lynch is cautious in the company's official market forecast, calling for the S&P 500 to reach 2,800 in 2018, a modest 3.8% increase from its opening value on January 3. So this shows that BofA Merrill Lynch as a whole is much less bullish than its successful sell side indicator.

Bull Market With Plenty of Room To Run Seen Rising 27%

Stocks Poised for Bull Run in April Despite Monday Sell-Off 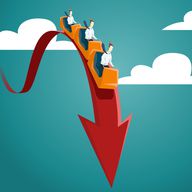 Why Stocks May Stage a Summer Rally

Why Bank of America Says Buy In September In Contrarian View

2019 Stock Market Predictions From 3 Gurus
Partner Links
Related Terms
January Barometer
The term 'January Barometer' refers to the belief that the S&P 500's performance in January can predict its performance for the rest of the year.
more
Presidential Election Cycle Theory
The presidential election cycle theory attempts to forecast trends in U.S. stock markets following the election of a new president.
more
What Is the Einhorn Effect?
The Einhorn effect is the sharp drop in a company’s share price that often occurs after investor David Einhorn publicly shorts that company’s stock.
more
Stalwart
Stalwart is a description of companies that have large capitalizations and provide investors with slow but steady and dependable growth prospects.
more
Benjamin Graham
Benjamin Graham was an influential investor who is regarded as the father of value investing.
more
Santa Claus Rally Definition
A Santa Claus rally describes sustained increases in the stock market that sometimes begin in the week leading up to Dec. 25, before the Christmas holiday.
more
Dialog Heading