The Norwegian Reward World Mastercard offers 2% rewards on purchases from Norwegian Air and for dining and groceries. There’s a one-time offer of $50 and another of $100 for spending $20,000 a year, both delivered in points. The card has no annual fee. 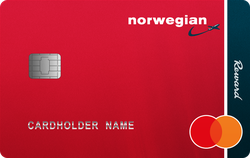 Earn $50 in CashPoints that can be used for future travel when you open an account and spend $500 in the first 90 days.

Norwegian says they're going through a reorganization plan for a portion of their business, including pausing all airline-related rewards and benefits, so the card is currently not available for new customers. The information contained in the article has bee updated as of September 29, 2020. You can review our list of the best airline credit cards for alternative options.

It’s not uncommon for airlines to provide richer offers on their flight checkout page. For example, on 6/10/2020 we received an offer for a $50 statement credit + $50 in CashPoints for opening an account and using our new card to complete the booking in process.

Finally, the Norwegian Reward World Mastercard charges no foreign transaction fees, and so would be a good acquisition for those who travel abroad and have no other card in their wallet that omits these fees. And even occasional Norwegian Air travelers may enjoy free priority boarding, which is the card’s main benefit.

You receive $50 in CashPoints if you spend $500 with the Norwegian Reward World Mastercard in the first 90 days. That spending requirement is waived, and the points awarded more immediately, if you open a card account at the same time you buy a Norwegian Air ticket. Your CashPoints can only be used to redeem for airfare on Norwegian Air.

The Norwegian Reward World Mastercard has a rewards earning of 2% on Norwegian Air purchases, as well as eligible dining and grocery purchases. Rewards are earned as CashPoints. So, for every $100 spent on eligible purchases, you would receive $2 in CashPoints.

All other purchases receive 1% in rewards or $1 in CashPoints for every $100 spent on eligible purchases.

Norwegian CashPoints normally expire in 24 months. Owners of the Norwegian Reward World Mastercard get twice as long—48 months—before points are removed from their CashPoints account.

The CashPoints you earn with this card can be redeemed only for purchases from Norwegian Air. Redemption involves logging into your Norwegian Air account and choosing the flight itinerary you prefer. You can then choose to pay with your CashPoints, as long as your account is in good standing. It’s possible to redeem with no minimum requirement and there are no blackout dates or destination limitations.

The Norwegian Reward World Mastercard doesn’t offer a way to transfer to other partners. Instead, redemption is limited to booking flights via the Norwegian Air website.

As with most airline cards, you earn the highest rewards rate with Norwegian Reward World Mastercard for purchases from the airline itself. What’s uncharacteristic about the card is that that same highest rate applies to purchases in some other categories, too. As a result, you can as effectively maximize your earnings with the Norwegian Reward World Mastercard through buying groceries or restaurant meals as you can by charging tickets on Norwegian.

Even if you don’t make any air purchases, though, you could use the Norwegian Reward World Mastercard for miscellaneous purchases, which earn 1% rewards.

Let’s say you supplemented the approximately $8,000 a year in groceries and dining spending noted above with about $1,000 a month in miscellaneous spending. If you indeed did reach $20,000 in annual spending, you’d earn the bonus of $100 in CashPoints. That extra reward would be on top of the $158 for the food spending and $120 for the miscellaneous spending. The grand total of rewards would be $378, for $20,000 in spending. That represents a decent rewards rate of 1.9 cents per dollar spent.

Synchrony Bank, which issues the Norwegian Reward World Mastercard, has a middling record for customer service. Synchrony received a score of 780 out of 1,000 in the J.D. Power 2019 U.S. Credit Card Satisfaction Study. That’s a little lower than the national issuer average of 806.

Synchrony offers a mobile app that can be used to manage your account. The Synchrony Bank app has 3.6 stars out of 5 on Google Play and 4.4 stars out of 5 in the Apple Store.

Where major card issuers provide 24/7 customer service, Synchrony Bank’s main customer service line, at 877-295-2080, is available for only 16 hours a day on weekdays. It operates Monday through Friday from 8 a.m. Eastern to midnight Eastern. Synchrony also offers a FAQ that can help you find answers to common questions.

The Norwegian Reward World Mastercard offers a typical array of security protections, including around-the-clock monitoring to catch incidents of identity theft and a $0 fraud liability policy, so you won’t have to pay for unauthorized purchases.The card also comes with Mastercard ID Theft Protection.

The Norwegian Reward World Mastercard could be a natural and fairly effortless acquisition for those who travel even occasionally on the low-cost international carrier. Opening an account for the card while buying a Norwegian Air flight allows you to instantly earn rewards on the purchase and to receive the card’s bonus of $50 in points without need for the $500 in spending it usually requires. Heavy spending on the Norwegian Reward World Mastercard might earn you a return that’s comparable to those from a better cash-back rewards card.

However, unlike with cash back cards, those rewards would be tied to a single airline—and one that has been struggling in 2020. Those facts raise questions about the security of the rewards you earn with the Norwegian Reward World Mastercard in the long run. For those reasons, consider instead getting a no-fee card that provides comparable or better rewards that can be received as cash. Another plus: bigger one-time offers.

Next Steps
For Norwegian Reward World Mastercard®
on Synchrony Bank's Secured Site.
Compare This Card
See how this card compares to similar cards
CURRENT CARD
Norwegian Reward World Mastercard®
overall rating
2.7
Next Steps
Recommended Credit
Score Our recommended ranges are based off of the FICO® Score 8 credit-scoring model. Credit score is one of the many factors lenders review in considering your application.
350 579
580 669
670 739
740 799
800 850
Good - Excellent
Investopedia Credit Card Rating Methodology
Investopedia is committed to delivering the best credit card recommendations in the industry. We’ll tell you when a card is good, we’ll tell you when a card is bad, and we’ll only call a card the best if we would recommend it to our friends or family members.
Overall Star Rating Explained
To rate credit cards we objectively assess, score and weight nearly 100 individual card features which roll up into five major feature sets: fees, interest, rewards, benefits and security/customer service. Here’s how we weighted those feature sets for the overall star rating of a card:
We have applied our proprietary rating methodology to every generally-accepted credit card in the U.S. domestic market to allow consumers to make fully informed choices. It’s important to note that for our overall score that we make a number of assumptions about how you would be using your credit card: