What Is the Purple Book?

How the Purple Book Works

The National Taxpayer Advocate is required by law to present an annual summary of taxpayer issues and key areas in need of policy changes to Congress. The report must include a summary of the 10 most important legislative proposals. Annual reports also typically include:

Since 2017, the National Taxpayer Advocate has presented a Purple Book to Congress each year as part of the annual report. Each book is a compilation of “noncontroversial, common-sense reforms” that typically receive bipartisan support. According to the Office of the Taxpayer Advocate, 50 of the proposals have become law. More than 20 of these recommendations were included in the Taxpayer First Act of 2019.

The number of tax reform proposals in the Purple Book that have become law since 2017.

History of the Purple Book

During the two years preceding the inaugural Purple Book, Congress had shown interest in Internal Revenue Service (IRS) reform. The idea behind the book was to provide tax-writing committees with a summary of important legislative proposals.

The first Purple Book was introduced in 2017, and it presented these proposals in a clear and concise manner. It included brand-new proposals, as well as previously introduced legislation dating back to 2003, and was created by Nina Olson, the National Taxpayer Advocate from March 2001 until July 2019. She was replaced by Erin Collins in 2020.

One of the most important initiatives was to request that Congress codify the Taxpayer Bill of Rights as Section 1 of the Internal Revenue Code. The Taxpayer Advocate Service believes that taxpayers serve as the foundation of the U.S. tax system, as the system relies on taxpayers to willingly report income. However, there were concerns about the IRS being unresponsive to taxpayers.

The IRS added the Taxpayer Bill of Rights to the Internal Revenue Code in 2014. All of these rights had already existed in the tax code, but the new format was an easy-to-digest list.

The legislative recommendations in the Purple Book focus on strengthening taxpayers’ rights and improving tax administration. The most recent volume, the 2022 Purple Book, released on Jan. 12, 2022, still contains previous proposals that would increase funding for the IRS. Insufficient funding is an ongoing issue that has caused additional problems for taxpayers.

One of the biggest problems facing the IRS is a lack of resources needed to meet taxpayer needs. Based on research from last year's annual report to Congress, IRS funding has declined by 20% over the last decade. This lack of funding is the main reason behind many of the most serious issues, which include:

The 2022 Purple Book includes a proposal to revamp the IRS budget structure to provide sufficient funding to improve the taxpayer experience. The additional funding would also be used to improve and modernize technology services.

Taxpayer Advocate Service (TAS)
The Taxpayer Advocate Service is an independent organization within the IRS that assists taxpayers with tax-related issues.
more
Global Corporate Minimum Tax: How Would It Work?
Implementation of a global corporate minimum tax involves complex political, legal, and economic decisions. Learn the issues and how it could work.
more
What Is the Volcker Rule?
The Volcker Rule separates investment banking, private equity, and proprietary trading sections of financial institutions from lending counterparts.
more
SECURE Act 2.0
SECURE 2.0 is pending legislation aimed at strengthening retirement savings in important ways, but the Senate and House bills need to be reconciled.
more
SALT (State and Local Tax) Definition
The federal tax deduction for state and local tax (SALT) for taxpayers who itemize deductions was cut from unlimited to $10,000 in 2018. What’s next?
more
What Is the National Defense Authorization Act (NDAA)?
The National Defense Authorization Act (NDAA) is an annual congressional bill giving guidance on the policies and funding of defense agencies.
more
Partner Links 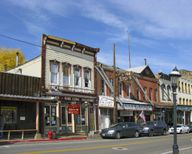 What Is the Rehabilitation Credit (Historic Preservation)?