The Radisson Rewards Visa offers 3 points per dollar spent on purchases at Radisson properties, a one-time offer of 30,000 points by spending $1,000 in the first 90 days, and the ability to earn award nights for high annual spending. The card doesn’t charge an annual fee. 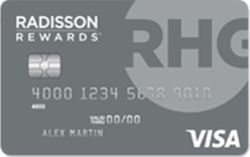 Points Are Worth Only About Half a Cent Each: Radisson Rewards points are worth less than many other loyalty currencies, according to Investopedia’s valuation. At a value of 0.42 cents each, even purchases from the Radisson Family of Hotels, which earn three points per dollar spent, would yield a total value of only 1.26 cents of value per dollar. All other purchases, which earn a single point per dollar, would yield a miniscule 0.42 cents of value per dollar spent.

The Radisson Rewards Visa card is best suited to those loyal to Radisson hotels—so much so that they’re prepared to spend fairly heavily on the card, including on non-Radisson purchases as needed. That’s because the card is most lucrative if you spend the average of $850 a month or so that’s required to earn an award night at a Radisson property every year. (You can also spend $1,700 or so a month for a year to earn two nights, or $2,500 a month to earn three.) That spending essentially vaults the value of the card’s rewards from weak to decent or better. This card could also be helpful to those who need a few key travel benefits that not all no-annual-fee cards provide: insurance coverage for rental cards and travel assistance. However, the Radisson Rewards Visa is less than ideal as an international travel companion. It charges foreign-transaction fees, which can be easily avoided with many other cards, including some that charge no annual fee. Also, its certificates for award nights stays are valid only at Radisson properties in the U.S.

You can earn a one-time offer of 30,000 bonus points, worth $126 according to our valuation of 0.42 cents per point, for spending $1,000 in purchases in the first 90 days of opening your account. This bonus falls behind those of other credit cards that offer $200 for spending only $500 within the first three months, but not by much. Once you qualify for the bonus, it takes 6 to 8 weeks for the points to appear in your Radisson Rewards account.

Points expire after 24 months with no activity, but even a single charge to the card qualifies as a use sufficient to preserve your rewards balance. Also, if you cancel the card within six months, you may not be able to keep the sign up bonus points in the account.

The card’s award night certificates provide an additional rewards opportunity for those prepared to charge five figures a year to the Radisson Rewards Visa. For each $10,000 that you spend on the card up to $30,000 per year you will earn a Free Night e-Cert.

Certificates can be redeemed for a standard room with double occupancy at Radisson Blu, Radisson, Radisson RED, Park Plaza, Park Inn by Radisson, or Country Inn & Suites by Radisson hotels located in the United States.

You can redeem your Radisson Rewards points for award nights, of course. You can also donate points to certain causes or use them to purchase gift cards, prepaid cards, TSA PreCheck and Priority Pass membership, as well as for instant in-hotel awards at Radisson properties, such as payment for movies, dinner, laundry, and more. Most of these options can be completed online using your Radisson Rewards account.

Your best option is usually redeeming your points for award nights, which you can do online when you’re logged into your Radisson Rewards account. We estimate points used for these redemptions are worth an average of 0.42 cents each.There are seven categories of hotels. The points requirements range from 9,000 to 70,000 points per night for a standard room, or 13,500 to 105,000 points per night for premium rooms. You can also combine points and cash to pay for rooms.

When using points for award nights, there aren’t blackout dates, technically speaking. However, redemptions are subject to availability.

Radisson Rewards points can be transferred to airline frequent-flyer programs, including those of United, Delta, and British Airways. But as with many such programs, the typical redemption rate is fairly dismal: every 10 Radisson points you transfer earn you only a single airline mile. Below are specific transfer examples, illustrating that there are no redemption bonuses regardless of points transferred:

You can also choose to earn rewards in your Radisson rewards account in air miles or points, rather than as points. But the transfer ratio is the same meager 10 Radisson points to 1 airline mile (with the exception of one partner, SAS, for which 7 Radisson points are required to earn a single SAS EuroBonus point).

Miles may take 4 to 6 weeks to post to your account. Once points are transferred to an airline, they cannot be transferred back to Radisson Rewards. Participating airlines include:

Getting the most value from the Radisson Rewards Visa begins with the relatively manageable task of spending $1,000 with the card within your first three months of account opening. That will allow you to earn the 30,000-point one-time offer. After that, spend at least $850 or so a month on the card to enjoy its best rewards—indeed, the card’s earnings are subpar if you don’t do so. That spending level will allow you to earn a night at the end of the year, an extra that should add at least a cent in value to each dollar you spend to reach that level.

Finally, while our estimated value per point is low, even when rewards are redeemed for Radisson stays, you may find better values if you shop around, especially if you’re flexible about where and when you stay. Hotel nightly cash rates can vary depending on property and date.

Since the awards night certificates you can earn with this card apply to a swath of different Radisson chains, from basic (like the Country Inn & Suites) to luxury (like Radisson Blu), check availability at all Radisson properties where you are hoping to stay. Pick a fancier chain if it’s available. But act as early as you can to grab one of those rooms, since award nights stays on any one date are limited.

U.S. Bank, the issuer of the Radisson Rewards Visa card, ranked 10th out of 11 national card issuers in the J.D. Power 2020 U.S. Credit Card Satisfaction Study. Its score of 786 places the bank 24 points below the national issuer average of 810.

The security features for this card are standard for the industry.

While this card doesn’t charge an annual fee, it does charge foreign transaction fees of 2% or 3% of your transaction, depending on whether your charge is in U.S. Dollars or a foreign currency, respectively.

Since it lacks an annual fee, the Radisson Rewards Visa may be worth considering even by those who only stay occasionally at one of the chain’s many hotel brands. Even if you use the card little, the one-time offer of 30,000 points could earn you up to three or so nights of lodging. After that, however, using the card is a good bet only if you’re prepared to purchase enough every year to reach the multiples of $10,000 in spending that will earn you award nights on your card anniversary. Otherwise, even Radisson spending could be more lucrative with another card. For example, a basic credit card that delivers 1.5% in cash back on every purchase would earn you a little more than the Radisson Rewards Visa on Radisson spending, and about three times as much on all other purchases.You might also consider the Radisson Rewards Premier Visa Signature. Its $75 annual fee is more than offset by its far better rewards rate and an anniversary points bonus that alone delivers value of more than twice the annual fee, when points are redeemed for Radisson stays.

Next Steps
For Radisson Rewards™ Visa® Card
on U.S. Bank's Secured Site.
Compare This Card
See how this card compares to similar cards
CURRENT CARD
Radisson Rewards™ Visa® Card
overall rating
3.4
Next Steps
Recommended Credit
Score Our recommended ranges are based off of the FICO® Score 8 credit-scoring model. Credit score is one of the many factors lenders review in considering your application.
350 579
580 669
670 739
740 799
800 850
Good - Excellent
Investopedia Credit Card Rating Methodology
Investopedia is committed to delivering the best credit card recommendations in the industry. We’ll tell you when a card is good, we’ll tell you when a card is bad, and we’ll only call a card the best if we would recommend it to our friends or family members.
Overall Star Rating Explained
To rate credit cards we objectively assess, score and weight nearly 100 individual card features which roll up into five major feature sets: fees, interest, rewards, benefits and security/customer service. Here’s how we weighted those feature sets for the overall star rating of a card:
We have applied our proprietary rating methodology to every generally-accepted credit card in the U.S. domestic market to allow consumers to make fully informed choices. It’s important to note that for our overall score that we make a number of assumptions about how you would be using your credit card: