Royal Caribbean Cruises Ltd. (RCL) is experiencing a slow recovery from the shock of the COVID-19 pandemic, which inflicted an estimated $11.1 billion in net losses during the past two fiscal years. Revenues, though improving, remain drastically below pre-pandemic levels. But the company's outlook is brightening. As much as 85% of its cruise ship capacity returned to operations during 2021, and passenger occupancy is rising. As a result, revenue is expected to rebound dramatically this year and approach normal levels as Royal Caribbean's ships continue their return to the seas.

Investors will be watching for signs of improvement in Royal Caribbean's financial performance when the company reports earnings on May 5, 2022 for Q1 FY 2022. Analysts expect the company to report its ninth straight quarter of adjusted losses per share. Revenue is expected to rise dramatically, but remain far below pre-pandemic levels.

Investors will also be focused on Royal Caribbean's occupancy rate, a measure of the amount of available passenger capacity, or cabins, being utilized. The company's occupancy rate has fallen due to the pandemic, but is expected to rise compared to the year-ago quarter. It will still be down sharply from levels prior to the pandemic.

Royal Caribbean reported Q4 FY 2021 earnings results that missed analysts' expectations. The company posted its eighth straight adjusted loss per share. Revenue rose nearly 29-fold compared to the year-ago quarter, but that gain was compared to essentially no revenues in the same quarter a year earlier. The company said that 12 of its ships returned to service during the quarter. It also noted that its total cash flow from ships in operation turned positive despite the spread of the Omicron variant creating short-term operational challenges.

In Q3 FY 2021, Royal Caribbean reported earnings and revenue that missed consensus estimates. The company reported another adjusted loss per share, making it the seventh straight. Revenue began to rebound, ending a streak of revenue declines. The company said that two-thirds of its fleet was back in operation. It also noted that the spread of the Delta variant during the quarter caused some delay in the company's booking progress.

Analysts expect Royal Caribbean to continue its gradual recovery in Q1 FY 2022. The company is forecast to post another adjusted loss per share of $4.40, but that would be the smallest since the first quarter of FY 2020. Revenue is expected to rise more than 27-fold, but will still be below normal levels before the pandemic. For full-year FY 2022, analysts estimate that the company will report its third straight adjusted loss per share. However, it is expected to be considerably smaller than in the previous two years. Annual revenue is expected to rise more than sixfold, ending the streak of two consecutive years of declines.

In each of the two years prior to the onset of the pandemic, Royal Caribbean posted occupancy rates between 108-109%. In FY 2020, the first year impacted by the pandemic, the rate fell to 101.9%. It then sank to 49.3% in FY 2021. It hit as low as 27.5% in the second quarter of FY 2021 before it began to rebound. It rose to 36.4% in the third quarter and then again to 59.3% in the fourth. Analysts are expecting the recovery to stall in Q1 FY 2022. While the expected occupancy rate of 58.7% will be significantly higher than the rate posted in the year-ago quarter it is relatively flat compared to the previous quarter. For full-year FY 2022, analysts are expecting the occupancy rate to be 85.0%. That would be a dramatic improvement from last year but still well below levels reached prior to the pandemic.

Carnival Q2 FY2022 Earnings Report Preview: What to Look for 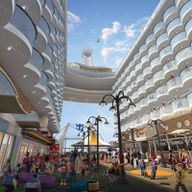 Royal Caribbean Q4 2021 Earnings Report Recap
Partner Links
Related Terms
Fiscal Quarters (Q1, Q2, Q3, Q4) Explained
A quarter is a three-month period on a company's financial calendar that acts as a basis for the reporting of earnings and the paying of dividends.
more
Rebound
A rebound refers to a recovery from prior negative economic or financial activity. For a security, a rebound means that it has moved higher from a lower price.
more
Gross Domestic Product (GDP): Formula and How to Use It
Gross domestic product is the monetary value of all finished goods and services made within a country during a specific period.
more
What Was Enron? What Happened and Who Was Responsible
Enron was a U.S. energy company that perpetrated one of the biggest accounting frauds in history. Read about Enron’s CEO and the company’s demise.
more
Income Statement: How to Read and Use It
An income statement is one of the three major financial statements that report a company’s financial performance over a specific accounting period. It focuses on revenue, expenses, gains, and losses.
more
Pre-Provision Operating Profit—PPOP
Pre-provision operating profit (PPOP) is the income a financial institution earns before taking into account funds set aside for future bad debts.
more
Dialog Heading