The Royal Caribbean Visa Signature card offers a bonus of 10,000 MyCruise points, worth up to $100 for certain redemptions, for making a transaction within 90 days of account opening. It also offers 2 MyCruise points per dollar spent on eligible Royal Caribbean, Celebrity Cruises, and Azamara purchases. You don’t have to pay an annual fee or foreign transaction fees, either. 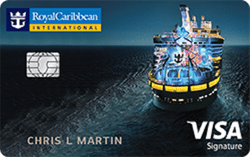 Get 10,000 MyCruise® points after making a transaction within the first 90 days of account opening - enough for a $100 onboard credit.

The Royal Caribbean Visa Signature card may be worthwhile for frequent Royal Caribbean, Celebrity Cruises, or Azamara cruisers—if they spend enough money with these cruise lines and carefully redeem their points for the maximum value. However, the low points rate on all other purchases and the less than optimal rewards redemption options mean that another credit card would likely provide more value.

You can earn 10,000 MyCruise points for making a single transaction on your card within the first 90 days of account opening. For the purposes of this bonus, a transaction is considered to be a purchase, balance transfer, or cash advance. When redeemed for their maximum value, these 10,000 MyCruise points could be worth up to $200 for certain premium cruise options, although their average value of $0.01 per point (according to Investopedia's valuation) would make the bonus only worth $100. The bonus is only for new accounts and will not apply to account conversion requests. The bonus points take about six to eight weeks to be posted to your account after you qualify.

The Royal Caribbean Visa Signature card allows you to earn 2 MyCruise points per dollar on eligible purchases made through Royal Caribbean, Celebrity Cruises, or Azamara. You'll also earn 1 MyCruise point per dollar on all other purchases. These reward earning rates are low when you consider other credit cards offer as much as 2% cash back on all purchases and sometimes higher reward earning rates in specific spending categories.

The points you earn expire five years after the month they were earned. Additionally, you’re limited to earning 540,000 MyCruise points in any given calendar year. If your account is closed for any reason, points that have not yet been redeemed will be forfeited.

You can redeem your MyCruise rewards points for several options starting at 1,000 points. Unfortunately, all of the redemption options deal with cruising, cruise merchandise, or charitable donations. The rewards options result in per point values of roughly 1 to 2 cents.

You have to be careful when redeeming your rewards to make sure you get the maximum value. For example, you can redeem 50,000 MyCruise points for a three- or four-night Royal Caribbean cruise. The cruise can have a value of up to $1,000, but the reward is only good for the minimum available oceanview stateroom. If this stateroom is worth less than $1,000 for the cruise you book, you won’t receive the full value of 2 cents per MyCruise point.

You'd also want to put all of your qualifying Royal Caribbean, Celebrity Cruises, and Azamara purchases on the card to earn the 2 MyCruise points per dollar spent. Bear in mind that you can likely earn a higher value on all other purchases by putting them on a different credit card that earns higher than 1% cash back.

Then, once you've earned enough MyCruise points, redeem them for an option that allows up to 2 cents in value per point and consider any cash back earned on another card as a partial offset to any additional cruise-related costs.

In J.D. Power’s 2019 U.S. Credit Card Satisfaction Study, Bank of America, which issues the Royal Caribbean Visa Signature card, received a score of 798 out of 1,000. The national issuer average score was 806.

This card gives you free access to your FICO score, updated on a monthly basis, through the mobile banking app or bank website. If you have questions and need to reach customer service, it’s available 24/7 at 800-421-2110.

The Royal Caribbean Visa Signature card has chip-and-PIN technology. That allows you to make purchases at unattended terminals overseas that only accept chip-and-PIN transactions. Otherwise, the security features for this card are in line with industry standards.

The fees on this card are relatively standard for the industry. On the plus side, it has no annual fee and doesn't charge foreign transaction fees, which can be a money saver when visiting overseas ports. However, If you make a late payment, you’ll be subject to a variable penalty APR of up to 29.99%. And once you trigger the penalty APR, it will apply to new purchases indefinitely.

The Royal Caribbean Visa Signature card may be useful for people who frequently cruise with Royal Caribbean, Celebrity Cruises, or Azamara. It doesn't charge an annual fee or foreign transaction fees, and the 10,000 MyCruise points bonus for making a transaction in the first 90 days could help pay for part of your cruise. But for non-qualifying, non-cruise purchases you would likely get more value by using a separate card, like the Citi Double Cash, which offers 1% cash back on purchases and an additional 1% cash back when you pay for those purchases.

Apply Now
For Royal Caribbean® Visa Signature® Credit Card
on Bank of America's Secured Site.
Compare This Card
See how this card compares to similar cards
CURRENT CARD
Royal Caribbean® Visa Signature® Credit Card
overall rating
3.5
Apply Now
Recommended Credit Score Our recommended ranges are based off of the FICO® Score 8 credit-scoring model. Credit score is one of the many factors lenders review in considering your application.
350 579
580 669
670 739
740 799
800 850
Good - Excellent
Investopedia Credit Card Rating Methodology
Investopedia is committed to delivering the best credit card recommendations in the industry. We’ll tell you when a card is good, we’ll tell you when a card is bad, and we’ll only call a card the best if we would recommend it to our friends or family members.
Overall Star Rating Explained
To rate credit cards we objectively assess, score and weight nearly 100 individual card features which roll up into five major feature sets: fees, interest, rewards, benefits and security/customer service. Here’s how we weighted those feature sets for the overall star rating of a card:
We have applied our proprietary rating methodology to every generally-accepted credit card in the U.S. domestic market to allow consumers to make fully informed choices. It’s important to note that for our overall score that we make a number of assumptions about how you would be using your credit card: