The Shell Fuel Rewards Mastercard gives cardholders 10 cents off per gallon on up to 20 gallons per purchase on Shell fuel purchases. You earn rebates of 10% on non-fuel purchases from Shell to a $1,200 annual spending limit and of 2% on up to $10,000 in dining and groceries purchases. The card has no annual fee. 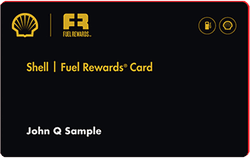 Get 5¢ off per gallon with Fuel Rewards Gold Status and 25¢/gal with the Shell Fuel Rewards Credit Card for a total of 30¢/gal (up to 20 gallons) on your first 5 Shell fuel purchases.

Recommended Credit Score Our recommended ranges are based off of the FICO® Score 8 credit-scoring model. Credit score is one of the many factors lenders review in considering your application.
350 579
580 669
670 739
740 799
800 850
Poor - Excellent
how this card stacks up
When compared among all rewards cards in our database:
Rewards
Benefits
Low Fees
Security/Customer Experience
Low Interest
worst best
Read our full methodology.

The Shell Fuel Rewards Mastercard is best suited to loyal Shell customers who visit the refiner’s stations often, both to fill up and to make purchases in station stores. The 10-cents-a-gallon rebate on Shell gas could really add up over a year, and the 10% discount on non-fuel purchases could contribute extra savings.

It’s also a decent option if you have no other card that rewards food purchases, for both groceries and dining. Its 2% rebates compare favorably with those you might earn from a better cash back card. However, since the rewards you earn can only be used for Shell fuel purchases, those who purchase gasoline elsewhere will not likely find enough benefits to consider this card.

You receive those savings on your first five purchases at Shell stations, each of up to 20 gallons of fuel. If you buy less than 20 gallons on any of your first 5 Shell fuel purchases, your bonus won’t reach the maximum $20 value. There is usually a time limit by which you must complete the five purchases. For example, at the time of writing, you needed to apply for the card by June 30, 2020, and make the purchases by Oct. 31, 2020, to qualify for this offer.

The one-time offer is for new accounts only. The savings should be applied at the time of purchase. If they aren’t, you will receive the savings in the form of a statement credit automatically posted to your monthly billing statement.

This card offers two benefits that could be considered rewards. The first is the ongoing 10 cents per gallon discount on up to 20 gallons of Shell fuel bought at a time. You receive the reward in two distinct halves. First, you save 5 cents per gallon at the point of sale, as a benefit of having Gold status in Shell’s Fuel Rewards program, which the card automatically confers. If these savings can’t be awarded at point of sale, a statement credit will be issued to your account. The average price per gas as per the U.S. Department of Energy will be used if data on how many gallons you purchased is not available.

A further 5 cents per gallon is then issued as a rebate on your monthly card statements.

A note on Fuel Rewards: It’s a free program for which anyone can register. Gold Status is automatically given to new Fuel Rewards members for the first six months of their membership and is maintained provided you fill up at Shell with at least five gallons six times in the prior three month period.

In addition to savings on fuel purchases, you also earn rebates of 10% of the amount you spend on anything else at Shell stations, up to a maximum “spend” of $1,200 a year.

Further, the card allows you to earn 2% in Shell rebates on your first $10,000 of dining and grocery purchases each year. Any Shell non-fuel purchases, dining or grocery purchases made in excess of the limits do not earn rebates. The annual rebate year starts the first day of your billing cycle in the calendar month of December and ends on the last day of your billing cycle in the following December.

You also earn 1% Shell rebates on all other qualified purchases. These do not include purchases made at locations selling non-Shell branded fuel, or on purchases for business or commercial purposes.

Rebates not redeemed within 12 billing cycles after they are earned expire, which shouldn’t pose an issue for frequent Shell fuel customers. Your account must be open and current to get savings on fuel purchases as well as to earn and redeem rebates.

The Shell rebates you earn are automatically redeemed against Shell purchases made when using your card. The Shell rebates are applied as a credit to your account in subsequent billing cycles after they are earned.

Making the most of the Shell Fuel Rewards Mastercard primarily involves filling up at Shell stations whenever you can. Since it’s unlikely that competing stations will beat the Shell price by more than the discounted amount, you should save on fuel costs by doing this. That’s especially the case for your first five fill-ups using the card, when the savings increases to 30 cents per gallon from the customary 10 cents.

The rebate on non-fuel purchases at Shell stations is more of a convenience than a cost-savings measure. You could probably buy items like snacks elsewhere at a savings of at least 10% over what they cost from Shell, but that fact hardly matters when you’ve stopped for gas and are hungry. Making grocery and dining purchases with this card may also suit you if you carry no other card that provides rewards of 2% or better on those purchases. Just keep in mind that it’s not hard to find cards that offer better returns on dining or grocery spending, if you’re willing to manage yet another payment option.

The Shell Fuel Rewards Mastercard is issued by Citi, which ranked in the middle of the pack in J.D. Power’s 2019 U.S. Credit Card Satisfaction Study. It received a score of 799 out of 1,000, which is a little below the 906 average for national issuers.

You can reach customer service for this card (at 800-331-3703) only between 7:00 am and 7:00 pm Eastern, from Monday through Friday. This is an extremely limited timeframe compared to most cards, which typically offer 24/7 customer service access.

The security features for this credit card are standard for the industry.

Given that it provides a 10 cents-a-gallon discount on Shell fuel, the Shell Fuel Rewards Mastercard may make sense for drivers whose regular gas stop is a Shell station. However, since the card’s one-time offer and other rewards are unremarkable, even Shell regulars might consider another strategy that might save them as much or more. Joining Shell’s Fuel Rewards program, which is free, will allow you to save 5 cents a gallon on Shell fuel. And the savings should be instant, applied at the pump, and earned regardless of the card you use. You could choose to use a card whose rewards on gas purchases would fill in much or all of the additional 5 cents in rewards on gas provided by the Shell Fuel Rewards Mastercard. Carefully chosen, that card might also provide better rewards on other categories than the modest returns of this card, and to offer more redemption options than the Shell Fuel Rewards Mastercard, which allows its rebates only to be applied to Shell purchases. For example, using a flat-rate cash back credit card, such as the Citi Double Cash, or a card targeted toward gas, dining or grocery purchases, in conjunction with Shell Rewards program might yield greater rewards value overall.

Apply Now
For Shell Fuel Rewards® Mastercard
on Citi's Secured Site.
Compare This Card
See how this card compares to similar cards
CURRENT CARD
Shell Fuel Rewards® Mastercard
overall rating
2.7
Apply Now
Recommended Credit Score Our recommended ranges are based off of the FICO® Score 8 credit-scoring model. Credit score is one of the many factors lenders review in considering your application.
350 579
580 669
670 739
740 799
800 850
Poor - Excellent
Investopedia Credit Card Rating Methodology
Investopedia is committed to delivering the best credit card recommendations in the industry. We’ll tell you when a card is good, we’ll tell you when a card is bad, and we’ll only call a card the best if we would recommend it to our friends or family members.
Overall Star Rating Explained
To rate credit cards we objectively assess, score and weight nearly 100 individual card features which roll up into five major feature sets: fees, interest, rewards, benefits and security/customer service. Here’s how we weighted those feature sets for the overall star rating of a card:
We have applied our proprietary rating methodology to every generally-accepted credit card in the U.S. domestic market to allow consumers to make fully informed choices. It’s important to note that for our overall score that we make a number of assumptions about how you would be using your credit card: