Industrial demand for silver continues to increase as countries cautiously reopen their economies after several months of coronavirus-driven shutdowns. Comex July silver futures closed Friday at $18.76 to register a gain of nearly 24% in May, the commodity's biggest monthly percentage jump in nearly a decade.

With the gold/silver ratio sitting close to an all-time high, investors have also turned to silver to hedge against near record-low interest rates, a high degree of market uncertainty, and the prospect of rising inflation triggered by unprecedented stimulus measures. "Once gold has somewhat run its course and starts to look expensive, a lot of people turn to the cheaper counterparty, namely silver, which has attracted fund and investor money," David Govett, head of precious metals at Marex Spectron, told MarketWatch.

Traders can position for further gains in the commodity through the three silver exchange-traded funds (ETFs) outlined below. Let's take a more detailed look at the specifics of each fund and point out important technical levels to watch.

With a 0.50% annual management fee, the iShares Silver Trust (SLV) provides a vanilla approach to gaining exposure to silver by tracking the commodity's spot price using silver bullion held in London. Almost 25 million shares exchange hands per day on an average penny spread, making the fund a popular choice among active traders. As of June 1, 2020, SLV holds assets under management (AUM) of $6.33 billion and has gained 20.28% year to date. Over the past month, the ETF has added nearly 15%.

The fund's share price formed a pennant above the 200-day simple moving average (SMA) last week, with price breaking out from the continuation pattern on above-average volume Friday. Traders who expect further gains should look for a move up to $18.35, where the ETF may find selling pressure near its 52-week high. Guard against a loss of momentum by placing a stop-loss order beneath the May 28 low at $16.10.

The VelocityShares 3X Long Silver ETN (USLV) aims to provide three times the daily exposure to the S&P GSCI Silver index – a production-weighted index of world silver producers listed in Organization for Economic Co-operation and Development (OECD) countries. The Credit Suisse-issued fund turns over more than 800,000 shares most days on a 0.34% average spread to keep trading costs in line with comparable leveraged funds. A steep 1.65% annual management fee is less important here, given the fund's short-term tactical mission. USLV controls $222.3 million in net assets and has advanced 56.19% over the past month as of June 1, 2020.

Like SLV, the fund has formed a pennant over the past week, although the pattern sits below the 200-day SMA. Despite Friday's close under this closely watched indicator, the price finished above a key horizontal resistance level at $70. Those who enter here should think about scaling out half of their position at the psychological $100 area and the remaining 50% at the 52-week high around $130. Protect capital with a stop order placed below the pennant's lower trendline at $60.

Launched in 2010, the Global X Silver Miners ETF (SIL) provides a product for traders and investors who want exposure to silver mining companies rather than the commodity's bullion price. The $455.31 million fund, which tracks the Solactive Global Silver Miners Total Return Index, holds about 28 stocks actively engaged in the silver mining industry. Competitive spreads, coupled with average dollar volume liquidity of $14 million, make the fund ideal for swing trading weekly price fluctuations. As of June 1, 2020, SIL yields 1.63% and has returned 16.72% over the past month. The fund carries an expense ratio of 0.66%.

Since bottoming out on March 16, SIL shares have trended sharply higher to trade above their pre-pandemic level. After breaking above major resistance at $34 in mid-May, the price retested this level last week, where buyers successfully defended the area. The test of support also coincided with the 50-day SMA crossing back above the 200-day SMA to generate a bullish golden cross buy signal. Traders looking for a more significant move should set a take-profit order toward the multi-year high at $50.90 while managing downside risk with a stop situated somewhere below $32. 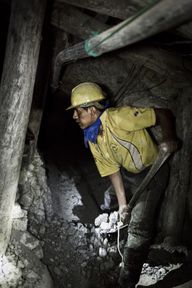 In the Zone: 3 Silver ETFs to Watch

Natural Gas ETFs Burning Brightly
Partner Links
Related Terms
Silver ETF
A silver exchange-traded fund (ETF) invests primarily in raw silver assets, which are held in a trust by the fund manager or custodian.
more
Moving Average (MA): Purpose, Uses, Formula, and Examples
A moving average (MA) is a technical analysis indicator that helps level price action by filtering out the noise from random price fluctuations.
more
Triple Witching: Definition and Impact on Trading in Final Hour
Triple witching is the quarterly expiration of stock options, stock index futures, and stock index options contracts all on the same day.
more
FTX: An Overview of the Exchange and Its Collapse
FTX, once the third-largest centralized cryptocurrency exchange, is now in U.S. bankruptcy. Its founder faces criminal and civil charges and goes to trial in October.
more
Head-Fake Trade
A head-fake trade is when a security's price makes a move in one direction, but then reverses course and moves in the opposite direction over a period of hours or days.
more